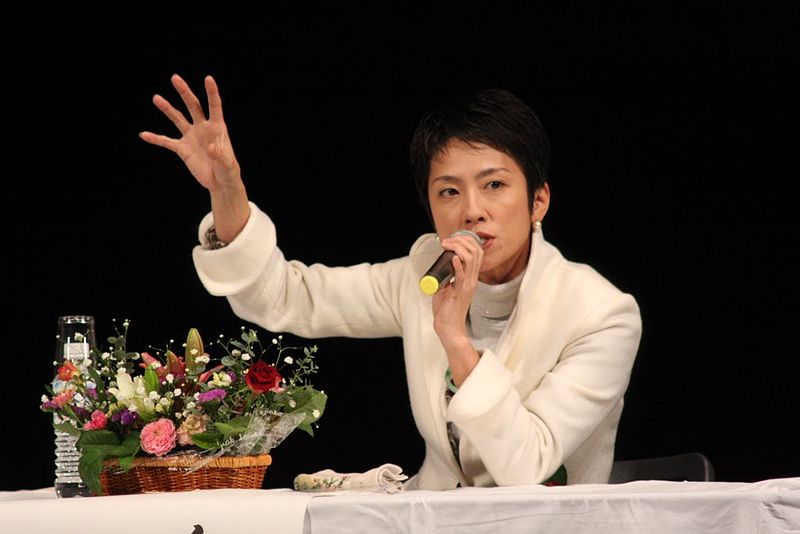 Support for the government may be falling, but the shock resignation of the Democratic Party’s top leadership shows that the crisis in Japan’s opposition is far deeper still.

If Japan had a domestic equivalent of Washington political drama House of Cards, the entire writers’ room would have been fired this week for the latest implausible twist in the story. The slump in the polls for Shinzo Abe’s cabinet shows no signs of abating, the Prime Minister’s personal ratings continue to slide, and the Defense Minister has been forced to resign after the latest in a series of hugely damaging scandals. The Abe government, until this point arguably one of the strongest and most stable administrations of Japan’s post-war era (in terms of its political position, if not its policies), has never looked weaker.

The dramatic plot twist that would, in fiction, utterly shatter the suspension of disbelief of many viewers? The resignation of both of the most senior members not of the ruling LDP, but of the opposition. In the space of two days, party leader Renho and secretary-general Yoshihiko Noda have both resigned, leaving a complete power vacuum at the top of the main opposition party.

This is, first and foremost, a tremendous shot in the arm for Abe’s political future. Since the LDP’s defeat in the Tokyo elections precipitated his drastic collapse in the polls, Abe has faced renewed speculation about internal challenges. Shigeru Ishiba’s formerly low-key campaign to be the LDP’s next leader has gone into overdrive; Foreign Minister Fumio Kishida is rumored to be seeking to exit the Cabinet in order to take a senior party role as a precursor to a leadership bid. Even Shinjiro Koizumi’s name has been thrown into the ring, though Koizumi fils is a canny enough politician to have a fine tuned “not yet” response to any talk of leadership ambitions; at 36, time is on his side.

The resignations of Renho and Noda are a high-profile reminder to the LDP’s membership that Abe’s drop in the polls has not been accompanied by a corresponding rise in support for opposition parties. On the contrary; the opposition is more fractured and disorganised than it’s ever been. Abe’s falling popularity won’t do the LDP any favours in any future election under his tenure, but in the absence of a credible alternative to vote for, dissatisfaction with Abe or the LDP is more likely to be reflected in falling turnout than in votes for other parties. With the Democratic Party now completely lacking leadership, Abe can point to the disarray of his party’s opponents and make a strong case for the LDP’s stability being its most valuable advantage – even if that stability rests upon a leader who’s no longer the electoral asset he once was.

Japan’s opposition parties have been prone to bouts of starry-eyed talk of “opposition realignment” in recent years; there was some excitement about the coordination of major opposition parties in the House of Councillors election last year, for example, with some observers hoping that it might hint at the emergence of a more unified and credible alternative to the LDP in the future. The resignations of the DP’s leadership are a sharp reminder of how little that project has progressed; in fact, opposition unity has regressed if anything. The inclusion of the Japan Communist Party (a far more moderate social democratic party than its name suggests) in the opposition alliance was sunk by loud objections from the DP’s right-wingers; meanwhile, the country’s three largest cities, Tokyo, Osaka and Nagoya, have all birthed local populist movements that have effectively taken over the reins of political opposition in those regions, leaving the DP and its allies out in the cold. Meanwhile, the only man who ever won an election for the Democratic Party of Japan, Ichiro Ozawa, is a divisive figure within the DP who remains outside the fold as leader of his own tiny Liberal Party.

Much of the problem is rooted in the nature of the Democratic Party itself – a rag-tag group of politicians for across a broad range of the ideological spectrum, many of whom don’t like one another very much, finding themselves united only by the common trait of not wishing to be in the LDP for one reason or another. The present Democratic Party is a Frankenstein’s Monster of a thing; formed by a union of the old DPJ (a hybrid of the remnants of the Japan Socialist Party, outcasts from the LDP and a handful of the neoliberal reformist parties that flourished briefly in the 1990s) with the Japan Innovation Party – itself a witch’s brew of a party whose heritage included hardline nationalists (from Toru Hashimoto’s Japan Restoration Party and Shintaro Ishihara’s Sunrise Party), right-wing libertarians (Yoshimi Watanabe’s Your Party) and deregulation-obsessed neoliberals (Kenji Eda’s Unity Party). Ostensibly the party aligned most closely with Japan’s trade unions, the Democratic Party includes in its membership people inimical to the very notion of organized labor. It’s no wonder that coherent policy-making has been an insurmountable challenge for the party; one person involved in policy drafting for the DP told me that many of the party’s grandees presently hold the rather extraordinary view that the DP should focus on winning power and worry about policy after it’s back in government.

That Renho’s tenure as leader of the DP was such a complete failure does not speak well to her capacity to organize and lead, and is hugely disappointing given her personal popularity as a politician. However, this is ultimately less about Renho and more about the fact that the Democratic Party is not a coherent political organization. Whoever next takes a shot at the leadership – Seiji Maehara and Yukio Edano seem like the most likely candidates – may enjoy more authority than Renho did, but will nonetheless be inheriting the same poisoned chalice that ended her tenure so early. The political realignment that Japan’s opposition needs is nothing as simple as a rebranding of the Democratic Party, or some shiny new leadership. If the LDP is ever to be ousted from power again, and Japanese politics recalibrated into something approaching a normal rotation of power between parties, a whole new opposition is required – one that is ideologically coherent, politically competent and capable of articulating a different vision for the future of Japan. As of now, the Democratic Party ticks none of those boxes.