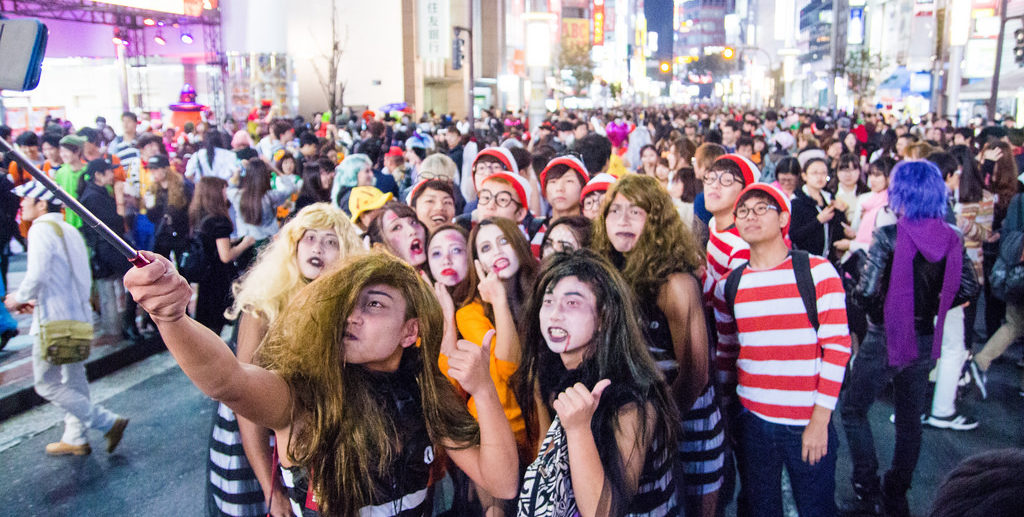 Even torrential typhoon rain couldn’t entirely dampen the Halloween spirit in Japan last weekend. Some costumes undoubtedly got soaked, but the street parties and club events that have become a fixture of late October still teemed with people; in total, the Halloween festivities and surrounding merchandise this year are estimated to have been worth around ¥130.5 billion ($1.4billion)1記念日文化研究所, 「２０１７年の『ハロウィン』の推計市場規模は前年比約３％減の約１３０５億円」, October 17, 2017, down a mere 3 percent from last year’s record figure despite the horrendous weather.

Halloween is far from being a Japanese tradition; fifteen years ago you’d have struggled to find much interesting to do for the festival, so it’s been a very rapid turnaround to the point where city centers are packed with costumed revelers and daytime TV shows are doling out decorating tips for a Halloween home party or the best ¥100 store products for creating grotesque zombie make-up effects. From the end of August onwards, shops fill up with Halloween themed products and displays, and the festival is roughly joint second with Valentine’s Day in the ranking of the most commercially profitable events – first place, of course, still falling to Christmas.

Perhaps unsurprisingly, the origins of Halloween in Japan are distinctly commercial. With the exception of a handful of small parties arranged by foreign residents (a small number of whom famously chose to make a public nuisance of themselves by holding noisy and drunken Halloween parties on train carriages), the festival went largely unmarked and unknown in Japan until Tokyo Disneyland introduced a Halloween event to its calendar in 2000. Osaka’s Universal Studios Japan followed suit with the “Hollywood Halloween” event in 2002; the two giant theme parks’ events were the first direct introduction to Halloween for many Japanese people.

Japan’s celebrations are American Halloween, as viewed through a Mickey Mouse shaped lens

Disney’s influence on Japan’s notion of Halloween remains pervasive. For a start, the country generally celebrates the festival not on October 31, but on the last Saturday of October (which fell on October 28 this year); by the following day, many stores are already taking their Halloween decorations down and replacing them with the Christmas displays which will dominate the next two months, so by October 31 Japan’s Halloween is largely over. This timing curiosity is derived from Disneyland’s calendar, which is naturally focused around weekends and saw the park change over its theme from Halloween to Christmas after the last weekend in October.

On a deeper level, though, Japan’s Halloween really is Disney’s Halloween; it’s American Halloween as viewed through a Mickey Mouse shaped distorting lens. All remaining connection to All Saints and All Souls Days, or the deeper historical origins of the festival are simply unknown; the deepest history behind Halloween in Japan is the rose-tinted 1950s nostalgia of Disney’s version of the holiday. Disney character costumes abound, along with a host of superheroes, generic witches and zombies. Despite Japan’s rich seam of ghost stories and horror movies, a handful of manga-inspired costumes is as close as you’re likely to see to anything that taps into home-grown culture. Americana is the order of the day, and indeed, that sense of doing something slightly exotic and international seems to form much of the appeal of the festival for many young Japanese people.

Moreover, although family aspects of the holiday – home parties for children, or events at schools – have been growing in popularity recently, Halloween here remains a largely adult celebration. Festivities in Tokyo are centered around the party hubs of Shibuya (where the police now draft in extra officers and multi-lingual assistance to try to handle the enormous crowds), Roppongi and Shinjuku (where the costumes in the small LGBT district, Ni-chome, are often pretty remarkable; telling people in an area which has lavishly dressed drag queens out every weekend that it’s “dress-up night” goes exactly as you’d expect). Despite the best efforts of confectionery manufacturers, trick-or-treating – the cornerstone of celebrations in the United States – and other child-centered activities have never caught on to any significant degree.

The adoption of the festival is a work in progress; what local touches, flavor and reinterpretation will be added in future years?

Some foreign residents complain that these differences – the Disneyfication, the adult focus, the lack of key traditions or foods – constitute Japan doing Halloween “wrong” (while ignoring that drunken adult Halloween parties and barcrawls are more popular than ever in U.S. cities). A more interesting way to look at the adoption of the festival is as a work in progress. Japanese people have embraced Halloween for exactly the same reason that it exists in one form or another across much of the world; it’s a fun and colorful festival held at a time of the year when nights are getting longer and colder, and it taps into a love of the macabre, spooky, or grotesque which is evident from even a passing glance over Japanese culture. Ghost stories are more traditionally associated with summer in Japan (some even hold the belief that being scared by a good ghost story genuinely “chills” you, making it a cheap way to beat the summer heat), but their appeal in the lengthening October nights has struck a chord here just as it has in cultures around the world.

Sure, the version of the holiday Japan received is a Disney-distorted view of American Halloween (itself a grossly commercialized and only half-recognizable mutation of the Scottish and Irish Samhain; anyone complaining about Halloween “not being done right” who’s never broken a milk tooth on a ring stuck in a loaf of Barm Brack or half-drowned trying to bite apples out of a bucket of water is a fraud, I tell you), but the country has only had its hands on the festival for a few short years. The really interesting thing will be seeing what local touches, flavor and reinterpretation is added in the coming years; whether it remains a celebration of Americana, or starts to delve into Japan’s own rich traditions of ghost stories, yokai and other supernatural nasties.