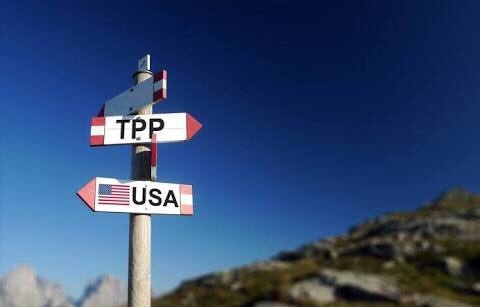 Though Donald Trump may have announced U.S. withdrawal from the massive trade agreement known as the Trans-Pacific Partnership (TPP), the remaining eleven members have agreed to move on without the United States, having just concluded their trade agreement along roughly the same lines, renamed the Comprehensive and Progressive Trans-Pacific Partnership at Canada’s request.

While these eleven TPP members lose preferential access to American markets, they can negotiate terms for future market access either bilaterally with the United States or collectively if the United States choses to accede to TPP in the future. The real loser will be the United States and its firms, both because they lose market access by missing out on TPP participation and also lose market share as producers from TPP-member states take advantage of the market access to fellow member states the U.S. left behind. Since Trump ordered U.S. withdrawal from TPP, U.S. stakeholders have been forced to spend their capital on preventing any backsliding, like withdrawal from NAFTA or KORUS, before they could think about taking the initiative on new agreements like TPP.

It’s meaningful that the agreement will not be as strong as the one the United States left: Vietnam has asked for more time to implement labor protections and Brunei and Malaysia has done the same for their state-owned corporations. To be clear, these are relatively minor concessions – more kicking the can down the road than a complete abandonment of the earlier rules – but both are the direct result of U.S. absence from the agreement. In other words, the promise of access to U.S. markets was enough to make member economies offer significant concessions, such as Vietnam on labor issues, but those concessions become much less palatable without that access. Trade critics, especially those in the United States, underappreciate the leverage the United States holds in these negotiations and its capacity to make demands for stronger environmental and labor rules. That was largely what President Obama’s negotiating team had achieved during TPP negotiations, but with the United States out of the picture, that leverage significantly diminished.

If and when the United States can rejoin these 11 economies is a complicated question, but much of it will depend on the outcome of the NAFTA and KORUS renegotiations. TPP was supposed to be the original renegotiation of NAFTA, addressing and adding disciplines that needed to be updated since it went into force in 1994. While Trump may be cooling off from his threats of withdrawal, the deal that he and his negotiators seek to achieve in the renegotiations will reveal much about what the United States may target if it aims to rejoin TPP. Beyond the NAFTA renegotiation, the various trade damage cases making its way to the president’s desk this year will be a good indicator of Trump’s willingness to act as a protectionist rather than just speak as one.

Of course, the above only relates to the conditions for a U.S. return to TPP. The “glass half empty” aspect is that the political impetus for new trade liberalization initiatives in the U.S. is almost nonexistent. Trade is one of the few areas on which liberal Democrats and Trump agree. TPP’s hopes for ratification were already on the rocks even before Trump’s election, and it’s hard to see his successor, whether Republican or Democrat, spending the political capital on an issue like trade. Consequently, the short answer to when the U.S. may join TPP11 may be “not anytime soon.”

It’s also worth pointing out the larger historical trend at work: Japan has achieved the remarkable feat of leading the remaining members of a free trade agreement after losing the United States, the economy that the other members of the TPP had hoped to access when they signed up for the deal and for whom they made previously unimaginable concessions. Japan almost singlehandedly kept the deal alive and relatively intact even without the agreement’s largest economy.

In so doing, and without much fanfare or attention (and certainly without concern), Japan took a large step towards becoming the standard-bearer for liberal democracy in East Asia. It has few peers in this regard – East Asia’s largest economy, China, is neither liberal nor democratic, Taiwan is constrained by geopolitics and the other states in Southeast Asia are each in their own ways tackling various impediments to liberal democracy and with varying degrees of success. Japan’s closest peer, South Korea, has unassailable credentials as a liberal democracy but a smaller economy and (for now) less geopolitical ambition, with most of its attention focused on managing the nuclear-armed neighbor with whom it shares the peninsula. But for now, Japan stands alone as the only state capable of promoting liberal democracy in East Asia as long as the United States continues its isolationist approach.

Japan may not adopt this role wholly or completely. Japan has always been more comfortable in economic diplomacy and commerce, and to defend liberal internationalism more completely would mean branching into areas of diplomacy where Japan has historically been uncomfortable, like more forcefully speaking out about Rodrigo Duterte’s drug war or the persecution of the Rohingya. But to the extent that economic rules can reinforce and buttress domestic rule of law across the member economies of TPP11, Japan will have a role to play in promoting and deepening democratic norms in East Asia. How and to what extent it adopts that role beyond TPP11 should be on the minds of Japan’s Foreign Ministry and National Security Staff.