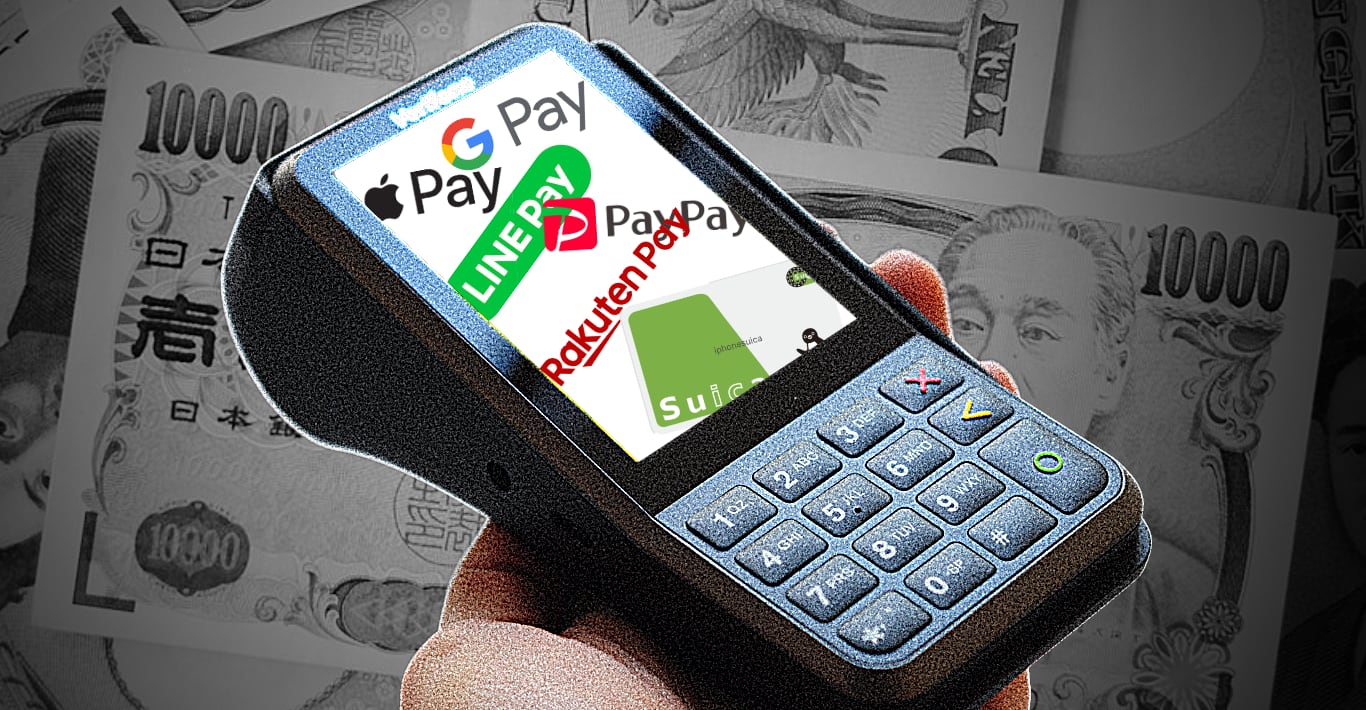 Japan’s consumers have been relatively slow to adopt cashless payments – but competition among firms hoping for a slice of the market has never been hotter.

While other countries are moving to cashless transactions, coins and notes remain king in Japan. Visitors to the country often remark on how much cash is used for everyday transactions – the spread of convenience store ATMs that accept international cards has ended the era when tourists struggled to access their money, but many are still taken aback by the sheer ubiquity of cash as a payment system. Japan is often compared unfavourably to China in this regard, with the widespread adoption of smartphone-based payment systems like WePay and Alipay being held up as a contrast between Japan’s technological stagnation and China’s rapid progress.

There’s no question that China is embracing these systems much faster than Japan – indeed, every major country in the world is ahead of Japan in the move to cashless payments. Japan’s love of cash can be seen clearly in national statistics – the cash in circulation in Japan amounts to over 20% of the nation’s GDP, which is significantly higher than the U.S. (8.3%), China (9.5%) or the Eurozone (10.7%). Some Asian nations approach this figure (Hong Kong, for example, has 17.3% of its GDP in circulation as cash) but none can quite match Japan’s obsession with real, tangible money.

The love of cash goes beyond simply paying for small transactions with coins instead of a smartphone. What visitors to Japan generally don’t see is that cash is often used even for very large purchases and transactions, something almost unimaginable in many other countries. The last time I moved into a new apartment, I carried over a million yen (c.$9000) in cash to the estate agent’s office to pay fees, deposits and advance rent, which made me feel rather like a Breaking Bad character but seemed perfectly ordinary to the office staff who handled it. It’s not uncommon to see someone making a big-ticket purchase in an electronics or furniture store produce a wad of ¥10,000 notes from their wallet rather than a card.

Despite the slow uptake of cashless transactions being held up as an example of technological stagnation, Japan actually has no shortage of the technology required to go cashless. Bank of Japan figures show that as of the start of 2018, there were some 327 million cards with an e-money function in use in Japan, along with a further 33 million mobile phones equipped for e-money functionality. That’s three e-money cards or devices for every man, woman and child in the country – and around 2.3 million payment terminals to support those devices have been installed, a figure which has risen steadily in recent years.

Indeed, if you want to use a cashless payment system in Japan there are plenty of options – from credit and debit cards, which are now widely accepted in all but the smallest of businesses, through to various e-money systems (often built into debit cards, store point cards or transit cards) which can be used for contactless payments in shops or at vending machines. The options are there – but growth in their usage has slowed dramatically. In 2017, ¥5.4 billion e-money transactions were made totalling ¥5.2 trillion in value – but that’s only 1.1% more value (4.5% more transactions) than passed through the system in 2016. Growth in earlier years was more impressive (the value of e-money transactions grew by 15.7% in 2015 and 10.8% in 2016), suggesting that e-money is hitting a ceiling in its adoption in Japan.

One cause for that slowdown may be the confusion created by a chaotic competitive landscape in which there is no clear winner among many different companies and technologies. 2018’s addition to this landscape was QR code systems which ape the experience of China’s WePay, allowing users to make payments simply by scanning a code on their smartphone screen – but a variety of card-based and contactless systems also remain popular and the coming years promise the launch of even more new systems, some sporting buzzwords like “blockchain” in their grand promises. For consumers, this is confusing; for business owners it is infuriating, with each new system requiring additional hardware at cash registers and additional training for staff. Stores and restaurants in Japan are now festooned with a huge assortment of stickers and signs showing which cashless systems are accepted; in the absence of clear winners in the space, cash is the only payment system which consumers can feel confident in using absolutely everywhere, so it becomes the path of least resistance for many.

This competition is likely to become even more intense before the market rationalizes. Companies with ambitions in this space include not only banks and financial institutions but also technology firms (along with international players like Apple and Google, both LINE and Yahoo! Japan have cashless payment systems on the market already), retail firms (AEON, Rakuten and 7-11 all have cashless systems) and some unexpected entrants like JR East. The ultimate winners in this space may not be the financial or technology giants you would expect; in recent years 7-11 has been running rings around traditional Japanese banks with its consumer banking offering, while JR East has come to operate one of the most popular cashless products in Japan (or at least in the Kanto region) by turning its ubiquitous Suica transit cards into widely accepted e-money. It wouldn’t be surprising to see one of those firms, or a technology player like LINE or Yahoo!, outpace the efforts of the established banks to become the eventual market leader.

A further driver of increased competition in the coming years is the Japanese government itself, which has hinted that it may be willing to incentivise cashless payments with a rebate on the consumption tax. What would make the government so keen on promoting cashless payments that it would forego some of its consumption tax revenues – revenues that successive governments have invested enormous political capital in increasing? While the possibility of Japan falling behind regional rivals in a key area of financial technology is certainly something the government is concerned about, a more pragmatic reason is cost. The creation, management and handling of physical currency incurs major costs for both the government and the economy at large. Physical currency takes time to handle in every transaction, needs to be stored and transported securely and is easily damaged, destroyed or lost; how many of the roughly 38 billion 38 billion ¥1 coins officially in circulation are actually being used, and how many have dropped between the nation’s tatami mats or rolled under cupboards? Estimates place the total cost of physical currency to the economy as high as ¥1 trillion per year, making the transition away from notes and coins into low-hanging fruit for efforts to make Japan’s economy more productive.

Even with the government’s backing and significant consumption tax rebates, however, moving Japan away from cash is going to be a slow process. Some commentators suggest that Japan has a specific emotional attachment to its physical currency, but that’s far from unique to Japan – anyone who lived in a European country during the debates over the introduction of the Euro can tell you how emotive the question of banknotes and coins became, yet this posed no barrier to the later adoption of cashless systems. A much more significant issue is that many of the benefits of cashless systems are simply less relevant to Japanese consumers. A very low risk of crime makes holding significant amounts of cash safe – it’s far more common for scammers to target the bank accounts of elderly or vulnerable people than for muggers to target their purses – while laughably low interest rates on bank accounts mean there’s no financial downside to keeping money on your person, or in your home, rather than depositing it with a financial institution. Low rates of forgery are also a factor; in some countries the rapid adoption of cashless technology has owed much to high rates of forgery that made banknotes untrustworthy.

Perhaps, then, the greatest hurdle that cashless technologies need to overcome in Japan is just how well its cash works – and rather than accusing the nation of a kind of collective Luddism over the glacial pace of this transition, we should instead ask what the actual value proposition of cashless systems to consumers is right now. Cash is a safe, secure and universally accepted system, albeit one with some minor inconveniences; the e-money offerings clamouring to replace it are a confusing mess of new, unproven systems that are not accepted everywhere and whose futures remain uncertain. Until the e-money operators, and perhaps the government, can come up with more convincing reasons for people to use these systems, the sight of large wads of banknotes or of coins being counted out at tills are likely to remain commonplace.