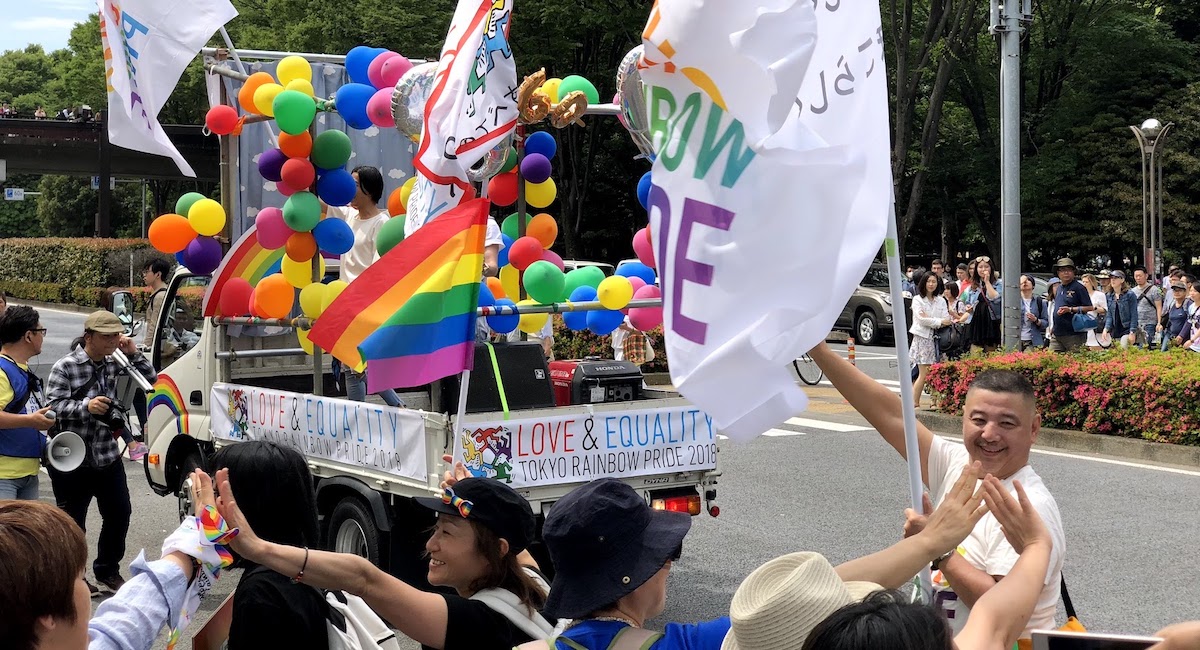 Tokyo’s Rainbow Pride parade exceeded 10,000 participants for the first time this year – further evidence that Japan’s LGBT movement is at a tipping point.

If there’s a single barometer for the progress made around the position of LGBT people in Japanese society in recent decades, it’s Rainbow Pride. Photos of Tokyo’s Pride parade over the past 25 years (the first was held in 1994) are a visual metaphor in themselves. Tokyo Pride started, as Pride marches in most other places did, as a political protest march by a community that felt under siege; fittingly, that first march began in the shadow of the then-new Tokyo Metropolitan Government building, at a time when the Tokyo government itself was engaged in a bitter legal battle over its refusal to let LGBT youth groups use youth hostel facilities managed by the city (the city would eventually lose this case in the Tokyo High Court in 1997).

This year’s Tokyo’s Rainbow Pride parade on April 28 wound its way through the busy streets of Shibuya and Harajuku, with the number of marchers surpassing 10,000 for the first time in the history of the event. Meanwhile, back at the large outdoor event space near Yoyogi Park where the parade begins and ends, around 200,000 people attended the two-day Pride Festival to watch live performances and visit the booths of sponsors, stores, and LGBT charity organizations.

For many years after its inception, the size of the Pride march ebbed and flowed, but sunglasses and paper masks – the standard attire of people wishing to retain anonymity in public in Japan – remained commonplace among participants right up until the late 2000s. Many participants wanted to campaign for LGBT rights, but the threat to their careers and relationships posed by “outing” themselves in a climate where discrimination against sexual minorities was still widely accepted as normal was simply too great. One side-effect was that many of those willing to march “unmasked” tended to be foreigners; unfortunately, while their intention to show support for Japanese LGBT people was laudable, the effect was that pictures of Pride events were often full of non-Japanese people, fueling the narrative that LGBT issues were something foreign, imported and antithetical to Japanese society and values.

It’s clearly meaningful that 10,915 people, mostly Japanese and all with faces unmasked, participated in a Pride parade

Given this context, it’s clearly very meaningful that 10,915 people, mostly Japanese and all with faces unmasked, walked through Shibuya on one of the busiest days of the year (the start of the long Golden Week holiday) in a Pride parade. Unlike the siege mentality that fueled the protest of the early marches, the overall mood of Pride in recent years has been celebratory; the parade is split into groups and while some are more politically focused, especially those marching to call for better education and testing facilities for sexually transmitted illnesses, others are essentially carnivals. Along the route of the parade many large retailers deck their shopfronts in rainbow flags in support; groups from famous Tokyo universities and major employers, companies both domestic and international, hold their banners high.

Criticism has been aimed at the commercialization of the event and there is certainly a discussion to be had about what the prominent presence of Mitsubishi UFJ, Google or Aflac does to the radical potential of an event like Pride. Yet for a community whose fear has often been that acknowledging their LGBT identity in public will destroy their life and career prospects, the presence and support of institutional pillars like banks and insurance firms, technology companies, and major universities is undeniably significant. Also significant is the attendance of many young families at the festival event; the development of Pride into an event considered to be a fun family day out is a mark of dramatic change in attitudes to LGBT people in broader society and a reminder that many young LGBT people can now come out to their families – something that was unthinkable for most in previous generations.

This, perhaps, is the quiet revolution of which Tokyo Rainbow Pride – and other Pride events which are growing in size and stature across Japan’s regional cities – is only the noisy, colorful tip of the iceberg. Over the past decade or so, young LGBT people in Japan have started to come out to friends and family in increasing numbers. While the results have not always been positive – as in other countries, it’s not unheard of for young LGBT people to be cut off by their families and end up in precarious situations, making them vulnerable to exploitation – overall it seems that families and communities have been accepting. Such acceptance creates radical change; for many families, “LGBT rights” are no longer some abstract concept, a thing that happens overseas or a short newspaper article that you gloss over, but a real and imminent issue directly impacting the life of a family member or loved one.

This is the tipping point which led to a rapid cascade towards the legal and social recognition of LGBT rights and minority protections in other countries; the moment when “sexual minorities” aren’t a distant, vaguely defined notion or a weird, funny TV character, but a brother or sister, a son or daughter, a cousin, a best friend, a colleague, or a confidante. The effect snowballs; seeing other people coming out and being accepted gives even more people the courage to publicly embrace their identity. It changes the political and social climate; public figures who bash LGBT people suddenly find that it’s not only the reaction of LGBT people themselves that must be considered, but the anger of a much larger group who take such statements as an assault on a member of their family or community. As recently as 2010, then Tokyo Governor Shintaro Ishihara could get away with describing LGBT people as “deficient” and “pitiful” with little domestic backlash; anti-LGBT comments by LDP politician Mio Sugita last year led to the suspension of a conservative magazine by its publisher, extensive media coverage and protests outside the LDP headquarters building, and Sugita’s attempt to campaign for a candidate in the recent local elections in Tokyo was drowned out by a protest group.

It helps significantly that smart conservative politicians in Japan aren’t willing to touch anti-LGBT activism with even the longest of barge poles, so support for the embattled Sugita from many of her party colleagues has been tepid at best. In part this is because anti-LGBT positioning simply isn’t the central plank of Japanese conservatism it is in many other countries; several hardline conservatives see no contradiction in also supporting LGBT rights (former Defense Minister Tomomi Inada is perhaps the most high-profile example) and it’s no coincidence that the tiny group of activists who have tried to stake out a political position based on opposition to LGBT rights generally sound far more like Western alt-right groups than like traditional Japanese conservatives. Perhaps more importantly, though, they also see where the wind is blowing; allowing parties like the CDPJ and JCP (whose leaders marched at the front of this year’s parade) to frame LGBT rights as an “opposition issue” may already be costing the LDP votes, especially in local assembly elections.

Where the slide on the other side of this tipping point leads remains an open question. Most of the wishlists of LGBT activists are fairly practical in nature – legal recognition of same-sex partnerships, protection from discrimination in housing and employment, reform of the currently draconian laws on legally changing gender and improvements in the health and education services for sexual minority groups. Some of these things will happen faster than others – an argument over whether same-sex marriage can be recognized in law without a change to the constitution, for example, is likely to roll on for several years.

Yet the logic of the tipping point is inexorable; change happens very slowly, until it happens very quickly – or as Hemingway would have it, change happens “two ways, gradually and then suddenly.” Despite occasional appeals to a kind of Japanese exceptionalism on this topic, Japanese society is by no means more intrinsically conservative or more resistant to change than countries like Spain or Ireland, which embraced LGBT rights movements after reaching their own social tipping points. A couple of hundred thousand people in Shibuya last weekend are strong evidence that Japan is firmly on the same path.