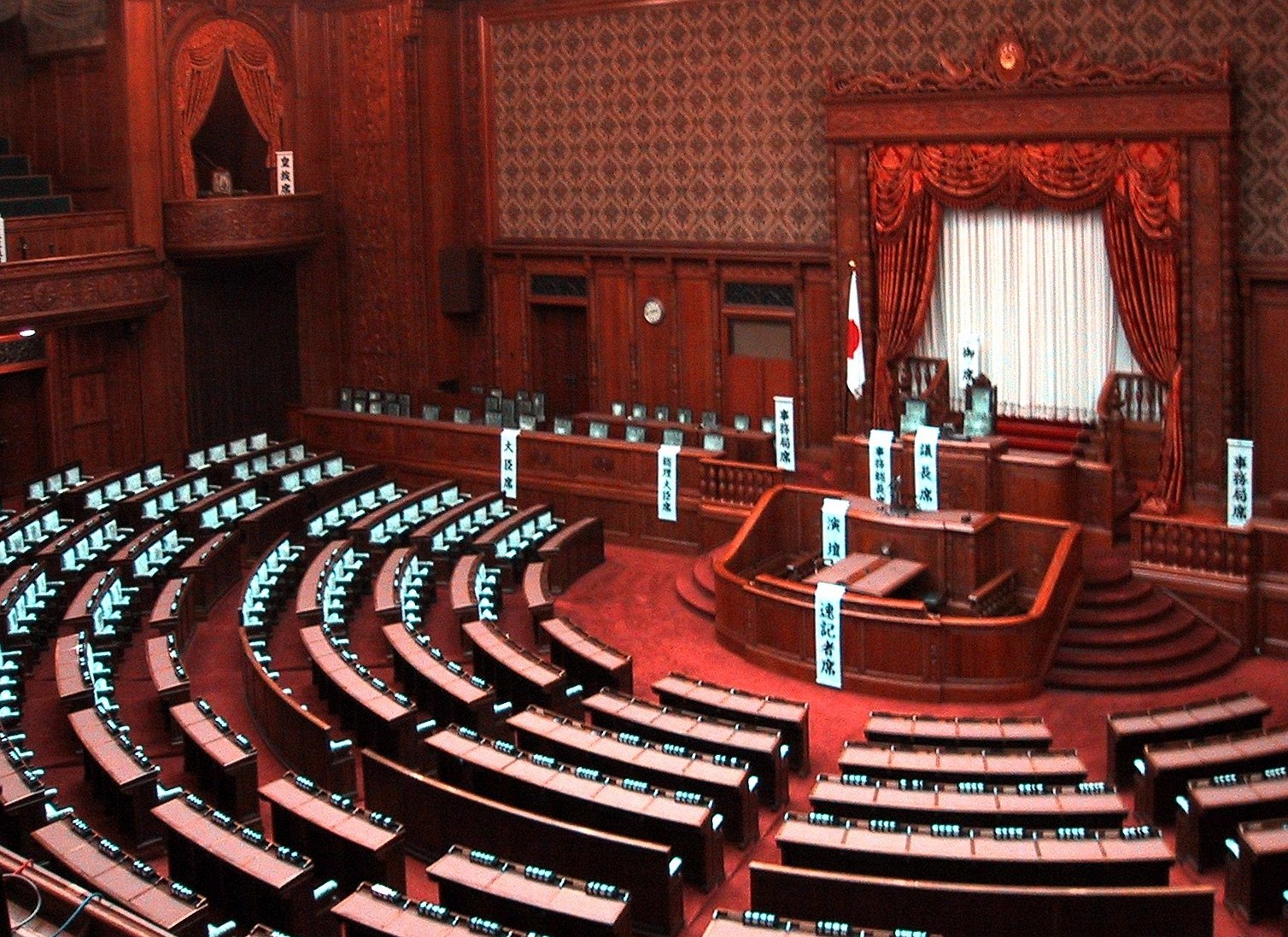 What is Japan’s House of Councilors? How is this “upper house” elected and what function does it serve in Japan’s parliamentary democracy?

The Parliament of Japan—the National Diet (国会, kokkai)—is made up of two houses, or chambers. This kind of arrangement is called a bicameral (“two-chamber”) legislative system, and in Japan as in most such systems, the lower house is the more powerful of the two. Called the House of Representatives (衆議院, shūgiin), Japan’s lower house serves a role similar to Britain’s House of Commons. The House of Councilors (参議院, sangiin) is the upper house, and functions similarly to the Irish Seanad or the Canadian Senate.

The House of Councilors was created by Japan’s post-war Constitution. Prior to World War II, the country instead had a House of Peers (貴族院, kizokuin), an unelected chamber modeled on Britain’s House of Lords and made up of a mix of hereditary aristocrats and members appointed by the emperor. After the war, Japan’s aristocracy was abolished, and with it the House of Peers. Its replacement, the House of Councilors, was more closely modelled on the United States’ Senate, the idea being that the chamber would be composed of representatives for each of Japan’s prefectures.

What does the House of Councillors do?

This means that the House of Councilors’ most powerful tool is the ability to delay legislation by forcing it back to the House of Representatives for a new vote. That can actually be a more powerful role than it sounds, because procedural rules in Japan’s Diet mean that if a piece of legislation doesn’t clear through both houses by the end of a Diet session1A session refers to the period of time when both chambers are open. By law there must be one “ordinary session” each year, usually comprising 150 days (though extensions are possible), and governments usually also declare one or two shorter “extraordinary sessions” in order to get through more business during the year. , it must generally go back to square one; the bill “expires” and the process can’t simply be resumed in the next session. The House of Councillors, therefore, can potentially kick a piece of legislation to the curb by simply delaying it for long enough that the session ends and the bill expires.

In practice, this doesn’t happen very often because the Liberal Democratic Party and its long-term coalition partner, Komeito, generally control at least half of both houses of the Diet. But there are sometimes situations where the government controls a majority in the House of Representatives (which is a requirement to be able to form a government at all), while the opposition parties have a majority in the House of Councilors. This is called a “twisted Diet” and it has happened twice in the past two decades. In 2007, the LDP lost a House of Councilors election to the Democratic Party of Japan (DPJ), which led to the resignation of Prime Minister Shinzō Abe a couple of months later and made life difficult for his successors.

The Diet was eventually “untwisted” by the House of Representatives election of 2009, with the DPJ’s victory meaning that both houses of the Diet were again in the same hands again. But the legislature was promptly “retwisted” by the 2010 House of Councilors election, when the DPJ-led coalition lost its upper house majority. This was a major blow to the nascent DPJ government and meant that unless the DPJ administration negotiated for votes with smaller parties, the LDP could effectively prevent most bills from passing—a strategy it used ruthlessly to turn the DPJ into a “lame duck” government. The LDP returned to power in 2012 and has had control of both houses of the Diet since then.

How is the House of Councilors elected?

Unlike the House of Representatives, where the prime minister essentially has the ability to call an election whenever he wishes, the House of Councilors must be elected on this fixed three-year cycle, and the prime minister has only minimal decision-making power over the timing (e.g. choosing which specific weekend of a given month on which to hold the election). This predictable schedule means that there is often speculation that the government will hold a House of Representatives election at the same time, but this kind of “double election” is actually very rare and has only happened twice since 1947 (1980 and 1986).

Unlike the U.S. Senate, however, the House of Councilors is meant to be broadly representative of Japan’s population. So as urbanization has shifted the balance between Japan’s prefectures, the allocation of seats in the House has also changed to try and keep representation more equal. The most populous prefecture, Tokyo, will be represented by 12 councilors as of the 2019 election, while four of the least populous prefectures have recently been combined into two merged districts (Tokushima-Kōchi and Tottori-Shimane) with two councilors each2Rulings in court cases on this topic have suggested that a 3:1 ratio (meaning that a person in an underpopulated prefecture’s vote would be three times more “powerful” in electing representatives than a person in the highly-populated prefecture) is the maximum limit that can be accepted, so changes to seat allocations are usually made to keep the ratio under that level.. There are 242 councilors in the chamber, but this will rise to 245 at the 2019 election and 248 in 2022, as more councilors are being added to address population disparities.

As in the House of Representatives, seats in the House of councilors are allocated according to a mix of local constituencies and national party lists, the latter accounting for around two-fifths of the seats. Voters fill out two different ballot forms when they go to their polling stations, one for their local district and another for the national lists—in effect, two different elections are run in parallel. Currently 146 members are elected in individual prefectures, using a first-past-the-post (FPTP) system—arguably the simplest kind of electoral system in existence, with the candidates who receive most votes being the winners. This number will rise to 147 in 2019 and 148 in 2022, with both of new councilors located in rapidly-growing Saitama prefecture, next to Tokyo.

The remaining 96 councilors (rising to 98 in 2019, 100 in 2022) are elected from a nationwide constituency, with votes from all over the country being tallied together. The electoral system for this nationwide group has changed several times over the years; until 1980 it also used first-past-the-post, but then switched to a proportional representation system where parties are allocated seats broadly in line with the percentage of votes they receive overall. Until 1998, this was a “closed list” system, so parties were told how many seats they got and could decide for themselves which people to nominate as councilors to fill those seats. After that, it switched to a “most open list,” which didn’t change how many seats parties got, but allowed voters to vote for an individual candidate, not a party, and forced parties to allocate seats in the order of which of their candidates got most votes.3In 2019, the system will change slightly again. It’s still mostly an open list system, but parties can now choose to nominate a “special frame” candidate who will always come first in their seat allocation. This unusual step is being taken to try to mollify voters in prefectures that have become so underpopulated that they have had to be merged with a neighboring prefecture in order to maintain a single district seat at each House of Councillors election, meaning that one of the two merged prefectures has essentially “lost” a Councillor (since the incumbent Councillor from one of them has to step down to allow the other to contest the election). The LDP plans to put nominate the “lost” Councillor as a special frame candidate, who will pretty much automatically be elected on the PR list.

This article is part of a new series, Japan Explained, which will provide in-depth guides to aspects of Japan that many foreign readers may not be familiar with. If you have a suggestion for a topic that you’d like us to cover, please let us know – or perhaps you have a specialist topic you feel you could write about for this series? We’re always happy to hear your suggestions over social media (Twitter, Facebook) or email – [email protected].