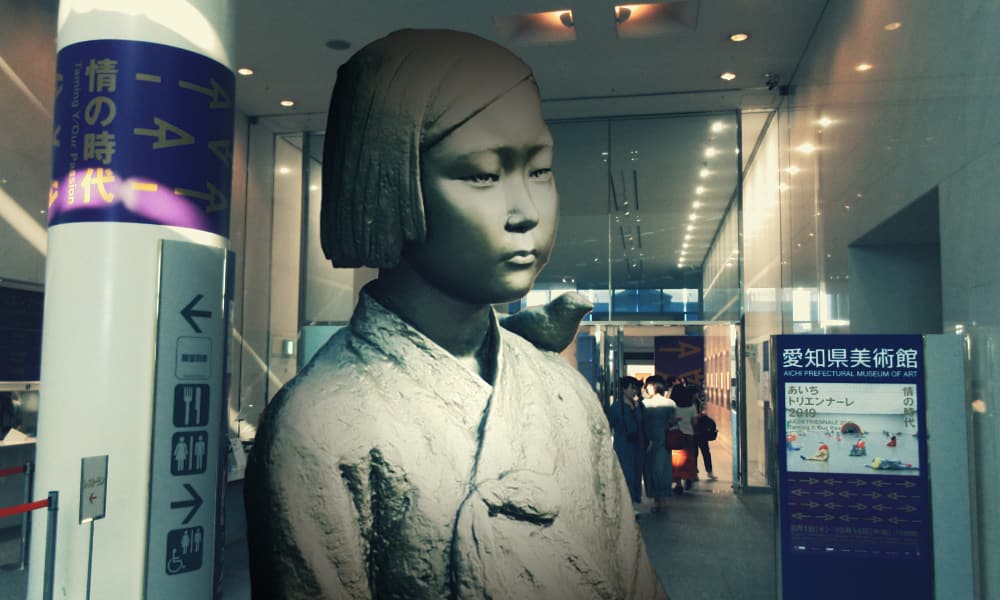 Threats from online extremists forced an art exhibition in Nagoya to close in 2019, raising fresh concerns over Japan’s commitment to freedom of expression.

On August 3rd of 2019, a section of the Aichi Triennale art exhibition was shut down due to a barrage of angry phone calls and threats on social media by netto uyo (ネットウヨ, ‘online nationalists’). The closed exhibit, called ‘After Freedom of Expression’, struck a nerve with the online right-wingers because of two artworks in particular: a sculpture of a comfort woman titled Statue of Peace by Kim Seo-kyung and Kim Eun-sung, and Holding Perspective: part 2, by Oura Nobuyuki,a 20-minute film that included a scene where a photograph of Emperor Hirohito was burned to ashes. Claiming that the artworks were “anti-Japanese propaganda”, the complaints of the netto uyo echoed the rhetoric of conservative politicians like Nagoya mayor Kawamura Takashi, who said that the exhibit  “tramples on the feelings of Japanese citizens”.

In deciding to display such artworks, the Triennale’s artistic director Tsuda Daisuke said that he wanted to “provoke discussion” regarding the health of freedom of expression in Japan. This desire to provoke discussion, however, leads to a question of whether Tsuda chose these artworks precisely for the sake of agitating the status quo – not in a manner that leads to some process of change or dialogue, but as a way to provoke controversy in the news media. As a result, nuanced questions of how an artwork’s aesthetics can influence the direction of a political discussion become lost in the generalities of how freedom of expression is a basic right that needs defending.

The initial decision to close ‘After Freedom of Expression’ received mixed responses. Both Tsuda and Aichi Governor Omura Hideaki framed the decision to close the exhibit as “risk management”, not only because of the torrent of complaints the museum staff had to endure, but also because of an ominous letter they received that threatened the use of a gasoline container, evoking the arson attack at Kyoto Animation that had killed 35 people only weeks before. Among those who disagreed with the decision, on the other hand, were other contributing artists of the Triennale, who drafted an open letter claiming that this amounted to nothing less than censorship. One month later, the Agency of Cultural Affairs – a special body of the Ministry of Education, Culture, Sports, Science and Technology (MEXT) – retracted a previously approved 78 million yen subsidy for the Triennale due to “inappropriate procedural matters”. Finally, after more than two months, on October 8th, ‘After Freedom of Expression’ was reopened to the public using a ticket lottery system, which ironically restricted the audience’s freedom to view the exhibit.

Hundreds of people turned up to enter the ticket lottery – driven by interest in the artworks or simple curiosity.

Visiting the museum on the following day, October 9th, I found a crowd of hundreds of people hoping to be chosen to see the exhibit – whether through interest in the artworks or curiosity sparked by the publicity. Those who won tickets in the lottery were asked to sign some documents before being escorted to a special room where the controversial artworks were held, and given a total of 40 minutes to view the exhibit: 20 minutes of “free time” and 20 minutes for Oura’s film. Upon entering, most of the crowd gravitated towards the Statue of Peace. There was a small chair positioned next to it, and viewers were encouraged to sit down and take a commemorative photo. A line formed, with the other artworks which had not been covered in the news receiving cursory glances.

Viewing these artworks up close, it was hard to understand how they could be called “anti-Japanese” or “hurtful”. Clearly, the aesthetics of the artworks have political messages, but nothing that overtly merits such a strong response from those who found them disagreeable. Rather, I began to consider the fragility and persistence of memory – these artworks signify political issues rarely discussed openly in Japan, and place the viewer in a binary where they are asked to either agree or disagree with what they see. This direct method of confrontation lays a foundation for conflict rather than dialogue, while also making the artworks an easy target for attack – especially on social media, where “offensive” aspects of the artworks can be exaggerated and taken out of context. There is no “gray area” in which both sides might find a basis for discussion, which diminishes the plasticity associated with art and its subsequent interpretations.

During a two-day symposium, Tsuda explained that the theme for the 2019 Aichi Triennale, jyou no jidai (情の時代, ‘Taming Y/Our Passion’) came to him after witnessing Brexit and the election of Donald Trump. At the time, he felt that the world was beginning to move in a new direction in which individuals were becoming increasingly polarized and deaf to voices that do not echo their own. In 2019, a sense that little had changed prompted him to experiment with how the nasake (情け, ‘compassion’) evoked through art might provide a solution to this lack of political dialogue. The theme is a play on words, as the character jyou (情) is used in a variety of words including jyou-netsu (情熱, ‘passion’), jyou-hou (情報, ‘information’), and kan-jyou (感情, ‘emotion’). As social media makes it easier to spread both information and misinformation, Tsuda saw “truth” as something increasingly difficult to identify as a result of inflamed passions and emotions.

The closure of “After Freedom of Expression” seems to prove Tsuda’s point about a lack of dialogue.

The Japanese constitution guarantees freedom of expression, but its current press freedom ranking of 67th raises some doubt about the sanctity of this promise, especially when compared to its previous ranking of 11th back in 2010. The State Secrets Law, which was passed despite protests in 2013, effectively allows the government to censor information it deems a “state secret”. With such tensions between free expression and politics providing a backdrop for the Aichi Triennale, the closure of ‘After Freedom of Expression’ seems to prove Tsuda’s point about the lack of open dialogue. However, if political dialogue through art were truly his intention, he might have included artworks that represented the other side of the discussion, or artworks that were less legible and overt in their political leanings.

Although the Aichi Triennale is now over, questions of art, politics, and memory still persist. In November of 2019, an art exhibition in Vienna concerned with Japan’s responsibilities during World War II and the 2011 Fukushima disaster lost its endorsement from the Japanese Embassy because it “did not match the conditions needed to promote friendly relations”. In a similar vein, an external review committee established for the 2020 Hiroshima Triennale (before the event was cancelled altogether due to COVID19 concerns) was described as an “explicit official censorship body” due to its ability to reject artworks deemed unsuitable for the exhibit. Furthermore, because the 2020 Hiroshima Triennale planned on including artists who had been involved in the Aichi Triennale, there was speculation that COVID19 simply provided a convenient excuse to cancel the potentially troublesome event.

The Aichi Triennale is a single incident in a longer struggle for control over “valid” memories regarding Japan’s past. What becomes apparent from such struggles is that tactics to censor political art largely fail because they tend to draw more attention to the issue – had the netto uyo left the Aichi Triennale alone, its now-famous exhibits would have likely remained largely unknown to anyone outside the art world. The challenge for artists, curators, and art museums, however, is to conceive of a way political art can be used to promote democratic discussion rather than mutual hostility.

Tadasu Takahashi is a freelance writer and independent researcher. He received his MA in Global Studies from Sophia University, where he also worked as a research and teaching assistant.