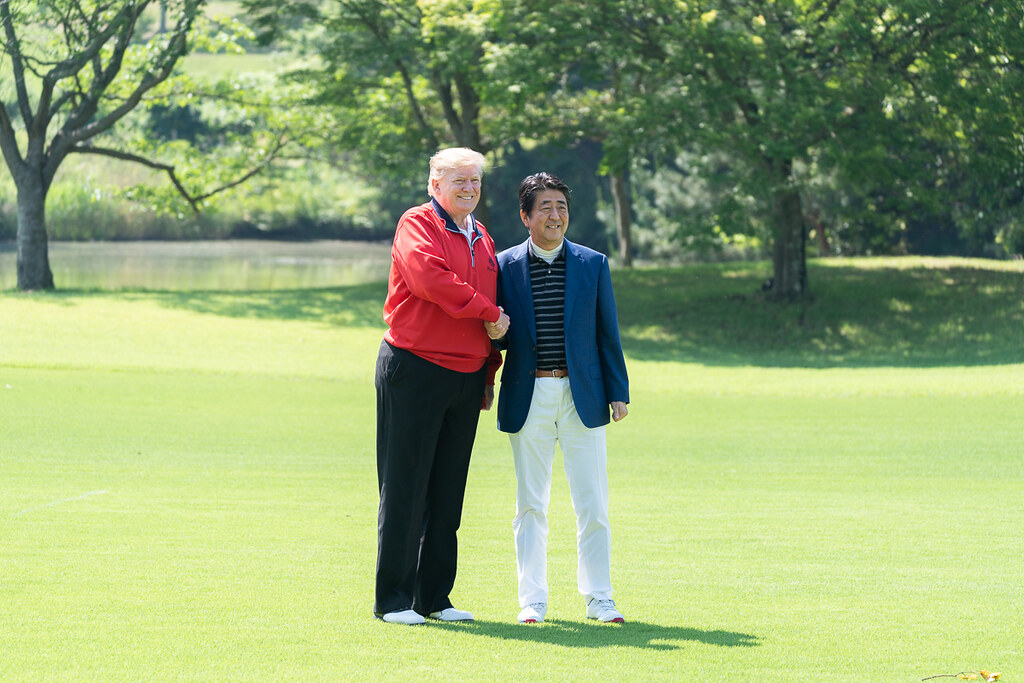 Former prime minister Abe Shinzo’s relationship with Donald Trump has been dissected in terms of its “wins” and “losses” but the only way to prove its success is to prove a negative – that Trump would have done much worse for Japan if not for Abe’s efforts to charm the mercurial president with matching hats, golf course visits, and hamburgers. The focus on whether Abe could calm Trump’s storm is asking the wrong question and figuring out if Abe’s approach has been successful is looking in the wrong place. Building trust and mollifying someone who can change markets and instigate emergency tariff negotiations with a tweet isn’t a bad strategy. But the fact that Abe’s approach with Trump was effectively the best of a bad set of options has less to do with Abe’s diplomatic skill and more to do with the contours of a Japan-U.S. relationship, which is a bigger and more complicated issue than Abe could be expected to solve.

The point of Abe’s diplomacy with Trump wasn’t necessarily to gain anything but to prevent Trump from causing economic damage to Japan or to undermine Japan’s security. Abe’s approach worked in the sense that Japan’s fundamental expectations for relationship have mostly remained intact since the first meeting back in November 2016, centered around making sure the United States maintains its treaty obligations for Japan’s security, prevent Trump from imposing crippling tariffs on Japan, and ensure that the United States doesn’t undermine Japan’s interests at international and regional forums. The only thing that can really be said to have changed are the specific circumstances – Trump withdrew from the Trans-Pacific Partnership on his first day of office like he said he would – and the level of familiarity, as shown by the golf course selfie. The risks to Japan are still mostly notional in that Trump might impose auto tariffs, that he might demand a renegotiation of the U.S.-Japan security treaty, and so on.

The only methods that seem effective at mollifying Trump are appeals to his finances or his vanity, and better to appeal to the latter than the former

Abe’s approach to handling Trump was so obsequious, maybe even cringe-inducing, that it was always going to raise eyebrows. The problem is that approach still won’t change Trump’s mind because nothing can change Trump’s mind. It’s obviously embarrassing for Abe when Trump still muses out loud about rebalancing the U.S.-Japan alliance but it’s also inevitable. But it also made practical sense – the only methods that seem effective at mollifying Trump are appeals to his finances or his vanity, and better to appeal to the latter than the former. It’s not clear that there were many alternatives. Trying to reason with Trump – someone to whom Japanese officials need to constantly repeat arguments to get the point across – based on the assumption that he has rational interests and is sophisticated enough to appreciate appeals based on economics and geopolitics should have been abandoned years ago (never mind the extremely bad take that Trump’s use of “elections” – plural – was supposed to be his subtle hint of a double election in Japan). Confrontational approaches to Trump weren’t very effective – Germany’s critical approach to Trump resulted in U.S. troop withdrawals from the country because “they take advantage of us on trade and they take advantage on the military” and he was prepared to do the same with South Korea. As a short-term, tactical effort, Abe’s charm offensive was the right approach – if Trump can’t be reasoned with, it’s better to keep him happy.

This is why the “horserace” analyses that focus on a scorecard of wins and losses were missing the point – “wins” under Abe’s approach were simply the absence of negatives. As usual, when all of the above gets framed in terms of the U.S.-Japan relationship, it typically (if unintentionally) ends up as a score-check of each sides’ relative gains and losses. To borrow an expression from American football, Abe was playing a “prevent defense” strategy where the defending team will grant the team on office the ability to complete small gains in order to let the game clock wind down and prevent the offensive team from completing a quick scoring play. That’s not to say Abe is an underappreciated diplomatic genius – his track record on the Northern Territories with Russia and failed efforts to secure a summit meeting with North Korea’s Kim Jong-Un should be enough to dispel that idea – but that making the most of a bad situation to maintain the status quo is a perfectly acceptable choice.

It’s an oversimplification, but for now Tokyo needs U.S. assets but not its vision

The problem is that this won’t be a permanent solution in the context of an assertive China and wobbly United States. The larger question that Japan needs to ask is whether it is wise or beneficial for Japan to continue to depend on an anti-liberal United States for its security. It’s a massive oversimplification, but in the short- to medium-term Tokyo needs U.S. assets but not its vision. The one area where the U.S. alliance is absolutely essential for Japan is the military balance with China, since the United States has capabilities that are well beyond Japan’s fiscal constraints or military abilities and Tokyo is in no position to offer its own substitute anytime soon. Japan has been successful in helping Washington understand the scale of the threat that China can pose but could do without the Trump administration’s insistence on framing situation as a new Cold War. The question is how long before the latter becomes the cost of the former.

It may be tempting to think that Trump’s administration may provide an opening for Japan to significantly reduce U.S. troop presence in Japan and more broadly lessen its dependence on the United States for its security. But such a process won’t occur in a vacuum. It needs to take place in a broader discussion on how Japan understands and evaluates its security and how it can address potential threats given the geopolitical context. The United States will remain in the picture simply because it is a Pacific power, and still more a more appealing partner for Japan’s needs than the possible alternatives.  With an increasingly belligerent and assertive China under Xi Jinping’s leadership, continued nuclear and missile developments in North Korea, and vulnerabilities to Japan’s commercial sea lanes, it’s not enough to expect that simply abrogating the U.S.-Japan security treaty, as Japan’s opposition parties have frequently called for, is a sufficient solution.

The trick for Abe should have been to manage his relationship with Trump while simultaneously broadening Japan’s options – something he was able to do with some success in Japan’s economic relationships, but the question of Japan’s security remains complicated. In the case of Abe’s relationship with Trump, mediocrity isn’t a bad goal, even if it looked uncomfortable. But it was never going to be a substitute for resolving the bigger questions.