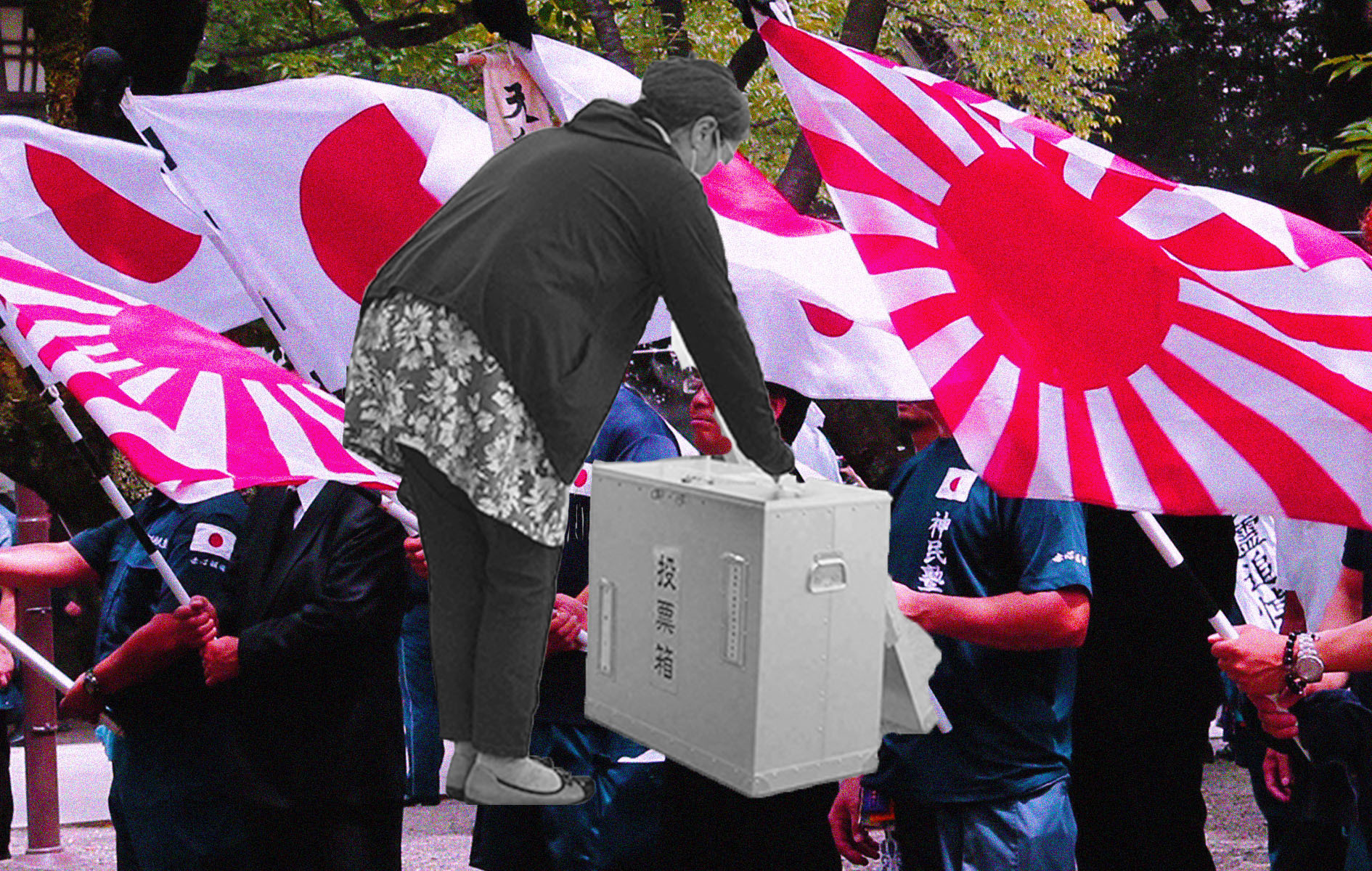 While prominent voices in Japanese politics may express nationalist views louder and more brazenly than in the past, Japan’s voters haven’t taken the bait – and have even provided a meaningful check on nationalists’ ambitions.

To what extent does Japan’s politics hold up a mirror to the attitudes and beliefs of its people? There’s an argument that that if nationalist conservatives occupy some of the highest positions of power, some of them using those positions to express skepticism about the atrocities of imperial Japan, they must to some extent be speaking on behalf of the electorate – or even on behalf of the entire country. If that language and behavior gets worse, or louder, or more aggressive, that must also reflect increasing extremism in the popular sentiments of Japanese citizens. This isn’t an entirely unreasonable argument – similar nationalist and extremist turns in the United States, the United Kingdom, and elsewhere have been buoyed by sizable political bases of support.

The problem with applying this logic to Japan, however, is that there is little evidence that those views, for all the attention they’re given, actually represent the perspectives of Japanese citizens – even citizens who actually vote for the very parties that platform those views. Rather, the broad sentiment of the public – and the desire of the ruling Liberal Democratic Party not to lose their support – has provided a check on the most significant ambitions of the nationalists that has thus far proven more resilient than in other democracies faced with similar challenges.

In recent decades many liberal democracies have found themselves with extremist, and often reactionary, parties in power. The United States has witnessed a marked rightward shift in the Republican Party and its voters, with electoral laws and governance structures ensuring their continued input on policy even when out of power, while the United Kingdom has seen partisan fragmentation that has forced parties to cobble together support from groups which can include some with extreme views. France and Germany, for their part, have seen growing support for extremist parties like the National Rally and Alternative for Germany. In all cases, the nationalist right wing has successfully exploited “culture war” wedge issues like immigration, religion, LGBTQ+ rights, and so on, but their relative success has still depended on larger structural issues in their political systems. Even where those parties haven’t achieved electoral success, they have still managed find a reliable support base and change the tenor of the debate.

There’s an assumption, especially among foreign observers, that because politics in the United States and other western democracies is becoming more extreme, this must be a global wave affecting other liberal democracies – like Japan’s – as well, and that it must also manifest in the same ways as western democracies, with demagogic populist leaders, anti-immigrant sentiment, and opportunistic deepening of culture war divides. While many scholars have indeed observed what they describe as a rightward shift in Japanese politics, the reality is more complicated (as might be expected in a situation where the LDP has been described, not unfairly, as the “world’s most successful socialist party”). It’s true that the LDP has shifted rightwards, but its shift has been far less dramatic compared to conservative parties in other countries. For Japan’s politics to really become extremist, voters would need to embrace not only the LDP broadly but also the nationalist agenda of its more conservative members. Instead, while Japan’s right wing has tried to pitch a “culture war” program, voters have refused to take the bait.

Japanese voters, on the whole, aren’t as ideological as the LDP’s hard-liners and are far less interested in nationalism or culture war issues than those on the LDP’s right-wing. While Japanese politicians may follow similar playbooks to overseas counterparts who attempt to distinguish themselves with appeals to values – for example, Boris Johnson, like Abe Shinzo to a degree, has relied on appeals to nationalism (and fractured opposition) to maintain electoral dominance – a major difference is that Japanese citizens largely don’t reflect these differences in terms of values. Japanese voters prioritize economic stability and social order (defined in survey questions as living in a peaceful society where laws are kept) and haven’t shown much willingness to follow political elites’ prioritized values (usually freedom and equality). Even morality and patriotism, while often prioritized by LDP candidates, aren’t prioritized by the LDP’s own voters. Certain conservative actors within the LDP try to use issues of patriotism or nationalism to fire up a portion of their base, but it’s not a large enough base to get anything done on its own – meaning that they depend on the cooperation of other portions of LDP support (never mind the general public) to elevate their prospects.

Furthermore, despite the LDP’s continuing electoral strength, there are underlying markers hint that the party’s dominance in the decades since 1994’s electoral reforms has been more incidental than structural. Electoral volatility has spiked since the 1990s, while reelection rates have dropped from 80 percent to 50 percent. In the United States, electoral volatility has plummeted as polarization has seen voters attach more deeply with their given party, while the opposite is happening in the United Kingdom, where volatility has spiked with British voters look for new parties to identify with. In Japan, independents remain a significantly large portion of the Japanese electorate, sometimes as high as 35 percent. The DPJ won in 2009 not least by unifying the support of these independent voters – and when the DPJ lost power in 2012, those voters’ power was splintered between a myriad of third parties.

The problem for the opposition since then has not only been that voters don’t see them as a credible government-in-waiting, but that voters haven’t been able to build strong ties with opposition parties given the lava-lamp of constantly shifting parties, party names, and other branding – simply put, it’s hard to get invested with a party that might not be around after the next election. As the University of Tokyo’s Kenneth Mori McElwain notes in a 2014 paper, voters need to be wooed by a party consistently and repeatedly. If the opposition continues to coordinate in elections and continues providing an ideological alternative to the LDP, as seems to be their strategy so far, the opposition may yet overcome that roadblock. If nothing else, simply being competitive might change the dynamic – historically, the LDP has retreated to the center when its electoral hopes are in peril.

Of course, just because extremism is politically limited doesn’t mean that there aren’t extremist actors who can exert significant influence. Harassment by right-wing trolls, for example, is a genuine and significant problem, and nationalist actors continue to carry significant weight in the LDP. For foreign observers of Japan, confusion can arise from whether commentators give more weight to the intentions of these actors, or to the effects they actually have. Neither can really be ignored. Focusing solely on intentions means ignoring the very meaningful checks on their actions from Japanese institutions and the public; while focusing solely on effects means tacitly – and perhaps naïvely – assuming that those checks will continue to hold as they always have.

The narrative of Japan’s deepening extremism has nonetheless been mostly grafted onto a frame that doesn’t fit. While Japan’s conservatives are certainly becoming more ideological and more invested in culture war issues, they’ve found a public much less receptive to their message than has been the case in the United States and United Kingdom. Japan’s nationalists and revisionists have found an audience that may be tolerant of their stances, but is largely unmoved by them and continues to be focused instead on valence issues like economics and infrastructure – a stark contrast with the success of extremists in other democracies. This may not stay true forever, but for now – and unlike the United States, the United Kingdom, and many EU nations – Japan has managed to keep extremism more or less at bay. The Japanese case challenges the narrative that the malaise of extremism has spread to all liberal democracies as a matter of course; acknowledging that Japanese voters have managed to resist extremism will help us to understand better what went wrong in other nations.