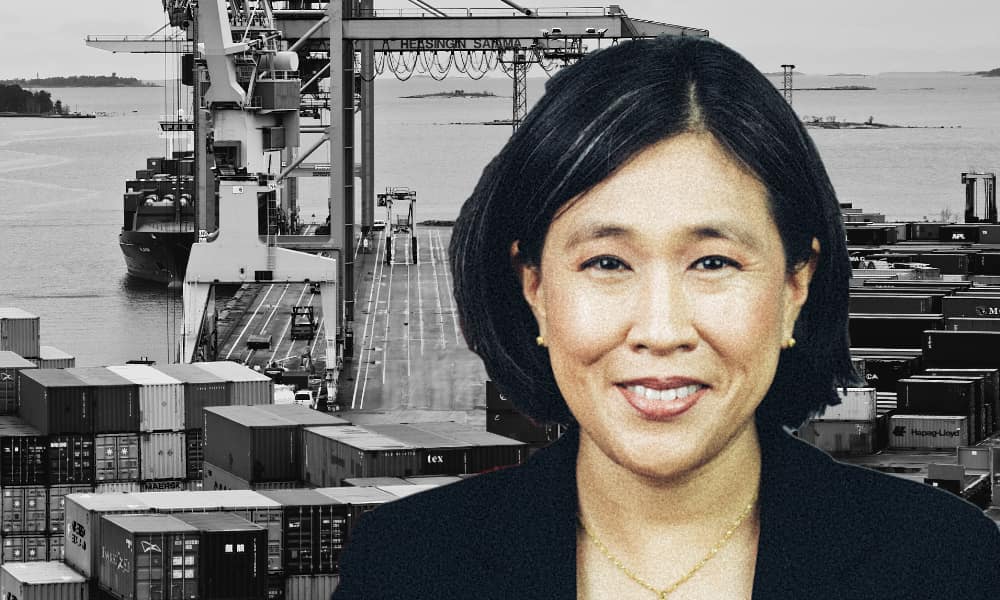 As US Trade Representative Katherine Tai visits Tokyo, domestic pressures weigh heavily on the prospects for progress on trade agreements.

Donald Trump’s biggest blow to Japan’s relationship with the United States came from one of his first executive actions. Almost as soon as he entered office in 2017, Trump withdrew the United States from the Trans-Pacific Partnership (TPP) agreement, a massive proposed free trade agreement covering 12 economies across the Asia-Pacific who accounted for more than 40 percent of global trade. In doing so, Trump didn’t only undo years of work by trade negotiators: he effectively sank the possibility of a long sought-after lasting trade agreement with Japan, and undercut Abe Shinzo’s economic ambitions for the region. The prospects for the U.S. re-entering the TPP under the Biden administration don’t seem promising so far; the administration has allowed key mechanisms that underpin the negotiations to expire, and hasn’t signaled any intention to enter into new agreements. When asked by the Asahi Shimbun in advance of her visit to Tokyo about whether the original TPP agreement had been positive for global trade, U.S. Trade Representative Katherine Tai responded with a coy “neither yes nor no.” This leaves Japan and other regional partners in an awkward place, lacking the political and economic heft of the world’s largest economy to support them.

Theoretically, a U.S. return to the TPP shouldn’t be too complicated. The remaining 11 partners in the (rebranded) TPP reached a new agreement that effectively reserved a seat at the table for the United States should a future administration decide to return – 22 provisions were suspended as a result and could presumably be added back into the agreement in some form or another upon U.S. reentry. In practical terms, the United Kingdom’s ascension process may serve as a template for a potential U.S. return. As Deborah Elms of the Asian Trade Centre in Singapore notes, when a new partner joins the agreement there isn’t a new negotiation over the rules and the chapters aren’t reopened, but the ascending country offers its schedule for market access and identifies the areas it would like to exempt from the agreement, as well as other commitments, all of which will be overseen by a working party and ultimately need to be approved by the current members.

The prospects for the U.S. re-entering the TPP under Biden don’t seem promising – leaving Japan and other regional partners in an awkward place.

The problem, therefore, lies not in the technical details of how the U.S. could rejoin the TPP – but rather with the fact that the Biden administration apparently has no intention to do so. Both the Trump and Biden administrations have shared a negative view of how the United States has fared under past agreements and a determination that any future agreement support the middle class. Biden’s motivation, however, is different from Trump’s – where the Trump administration believed that bilateral negotiations afforded the United States better leverage in negotiations, the Biden administration’s outlook seems grounded in a genuine belief U.S. trade agreements have caused more harm than good. While the argument that CPTPP (and international economics as a whole) is central to U.S. strategy in Asia still has its proponents in Washington, the administration has prioritized domestic job growth and enforcement of current agreements while hoping to keep its powder dry with Congress given the priority of passing infrastructure legislation and preparing for a challenging midterm election next year.

There are particular concerns among congressional Democrats that advancing an agreement on digital trade may come at the expense of a more “worker oriented” trade policy that emphasizes labor protections. Progress on a potential digital trade agreement with Asian countries has stalled, with the U.S. National Security Council seeking to advance an agreement for the sake of “setting the rules” in the region,  while the Office of the U.S. Trade Representative is holding back in favor of prioritizing concerns among congressional Democrats over the enforcement of existing trade agreements. Major tech companies are even holding back from lobbying for the potential agreement, concerned that their advocacy could poison the effort entirely among Democrats.

Ambassador Tai, who arrives in Tokyo on November 15 in the first stop of a trip to Asia that will also encompass visits to South Korea and India, worked in Congress for 13 years before her appointment at USTR.  She was instrumental in securing passage of the trade agreement between Canada, Mexico, and the United States that came into effect in 2020, so her instincts on what’s possible in Congress are almost certainly reliable. Obama’s attempts to secure Trade Promotion Authority and later ratification of TPP were incredibly divisive among Democrats, so much so that TPA needed 80 percent of Republicans to support the bill in the House and 90 percent of Republicans in the Senate. With Trump’s negative perspective on free trade now dominant amongst Republicans, the Biden administration would need to come up with new coalitions from both parties to take the place of Republican support. That’s a challenging proposition.

The challenge for Biden’s administration is to demonstrate its commitment to partners in the Indo-Pacific, while maintaining political capital in Congress for its lengthy domestic to-do list.

This means the work for the Biden administration is a classic “two-level game” which demands that U.S. decision makers balance diplomatic and domestic demands – in this case, the challenge is to demonstrate a credible commitment to allies and partners in the Indo-Pacific while maintaining the administration’s political capital among congressional Democrats for support of its lengthy domestic to-do list. As Bill Reinsch of the Center for Strategic and International Studies put it, “the administration is searching for alternatives that allow them to have their cake and eat it too – restore the U.S. presence in Asia without a messy domestic political battle.” The situation may come to a head in November, when Biden will likely visit the Asia-Pacific for various summits and will be faced with plenty of questions about U.S. commitment toward the region. While he is unlikely to be able to offer U.S. ascension to CPTPP, he’ll probably want to have something tangible to present.

That might be the best that Japan can hope for in the short or medium term. For Japanese decision makers, a more constructive goal than hoping for U.S. ascension to CPTPP might be to identify opportunities in specific sectors which can secure U.S. participation in regional economic initiatives at a lower political cost. One such opportunity could be U.S. participation in the Digital Economy Partnership Agreement, which would not require congressional approval.

Japan’s work in building upon the liberal order that defines the region’s economic architecture shouldn’t be described as futile – it has done meaningful work to expand economic governance in the region and to grow the topics and sectors that are covered. These efforts have intrinsic value in their own right for increasing prosperity in the Indo-Pacific and strengthening a rules-based system of regional governance. They may not be as meaningful without U.S. participation, but two-level games are never easy to win.