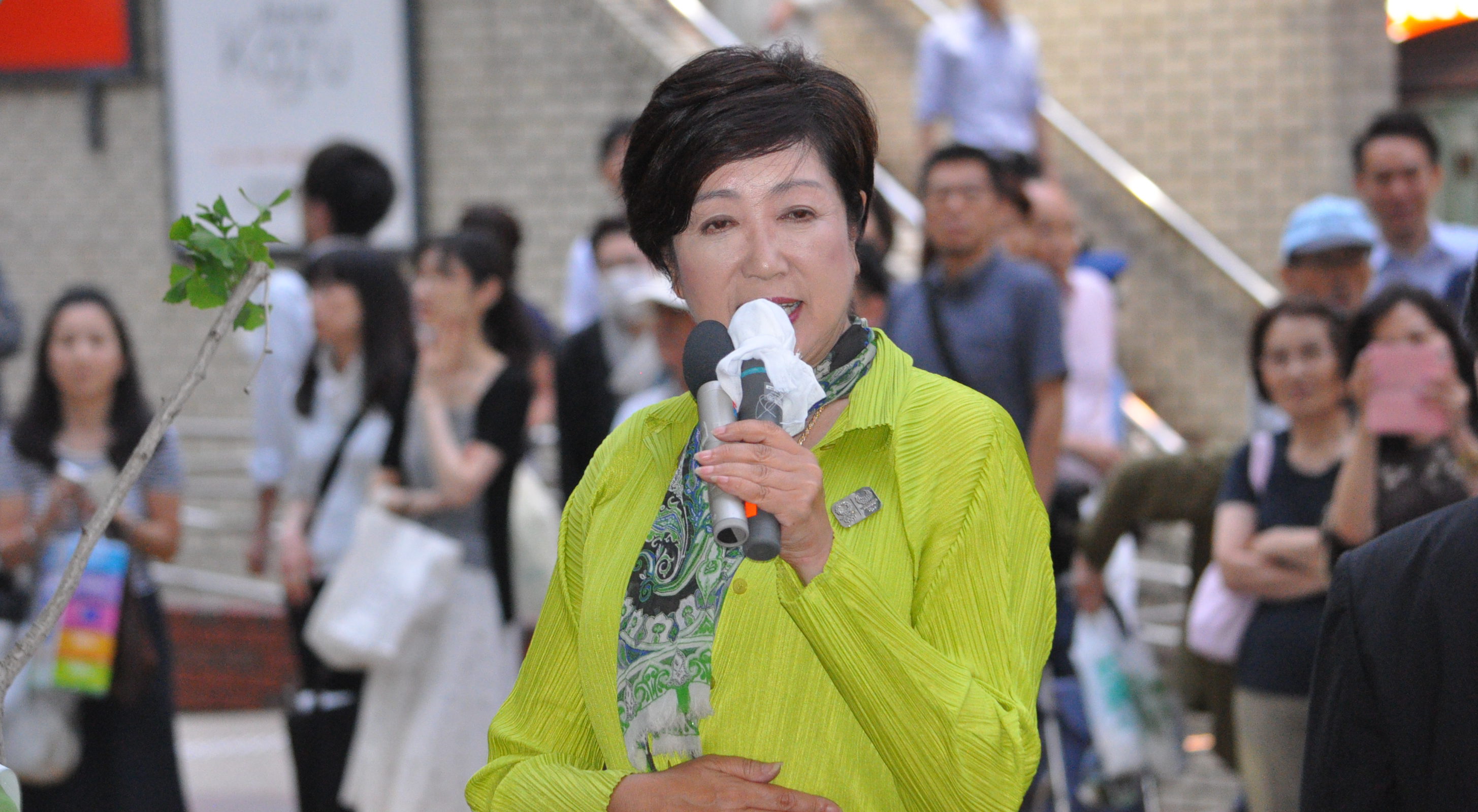 Though elected as a crusading reformer, Tokyo Governor Yuriko Koike is showing her right-wing roots – and risking her fragile coalition – with petty attacks on the city’s Korean residents.

The Tokyo Assembly resumed its duties after recent elections this week, with Tokyo Governor Yuriko Koike’s upstart party, Tomin First no Kai (Tokyo Citizens First), holding a solid majority in the chamber and giving the governor one of the most powerful mandates any leader of the city has ever had. But what should have been a triumphant week for Koike has been undermined by the governor herself, who made headlines not for her newly forged political clout but for her refusal to send a customary eulogy to a ceremony commemorating Koreans massacred in the wake of Tokyo’s devastating 1923 earthquake1Mainichi Shimbun, “Tokyo gov. skips eulogy to Koreans massacred after 1923 quake“, August 25 2017.

Though her electoral platform was all about anti-corruption and blowing fresh air through the smoke-filled rooms of Tokyo’s governance, Koike’s views on issues such as constitutional reform and wartime history are, though by no means extreme within Japan’s political spectrum, quite firmly right-wing. As a city governor rather than a national politician she has sidelined those views – which are after all rarely relevant to the governing of the Tokyo metropolis – and this has allowed her to strike a delicate balance between appealing to conservatives who defected from the LDP to vote for her, and energizing young voters and LDP opponents who turned out to support her reformist agenda.

Occasionally, however, an impetuous aspect of Koike’s character seems to assert itself over her political calculations, causing the mask to slip and the balance to wobble; never more so than when dealing with questions related to Tokyo’s Korean population and the city’s troubled history with them. The 1923 incident whose commemoration ceremony she declined to send a eulogy to was a low point in that history, when vigilante groups (aided and abetted in some cases by the police and military) murdered several thousand Korean residents after false rumours that they were poisoning wells and looting homes spread through the city in the wake of the Great Kanto Earthquake of 1923. The contemporary government estimated between 200 and 500 murders – a lowball number produced as the government belatedly responded to international condemnation of the violence. Independent estimates, though based on limited data, suggest a death toll of over 60002Denawa, Mai, “Behind the Accounts of the Great Kanto Earthquake of 1923“, Brown University Library Center for Digital Scholarship3Hammer, Joshua (2006), Yokohama Burning: the Deadly 1923 Earthquake and Fire that Helped Forge the Path to World War II, Simon & Schuster.

The refusal to send a eulogy to this ceremony is not the first time that Koike has let her mask slip when dealing with the city’s Korean residents. As far back as her election campaign in August 2016, she pledged to renege on former governor Yoichi Masuzoe’s promise to lease a property in Shinjuku to be used as a new Korean school4Otake, Tomoko (The Japan Times), “Plan for new Korean school in Tokyo threatened by Koike election“, August 1, 2016, alleviating waiting lists at the city’s single existing school for Korean children. In both of these cases, Koike used lip service to hardline conservatives as an excuse for her actions. Right-wingers who had never cared in the slightest about Tokyo’s lack of nursery spaces suddenly became hugely animated by the need for the Shinjuku site to be turned into a nursery once there was talk of a Korean school opening there. On the topic of the 1923 memorial, meanwhile, Koike told the Tokyo Assembly that she acknowledged “different opinions” on the topic of the massacre, referring to the complaints of hardline conservatives who claim disputed estimates of the number of people killed as an excuse to ignore the event entirely. (She stopped short, at least, of claiming there was violence “on many sides.”)

Does Yuriko Koike have a personal problem with Korean residents of Japan? If so, she would not be alone. The status of Japan’s Korean population has been a major source of dispute throughout the post-war period, and racist sentiment aimed at Korean residents of Japan is a factor that serves to complicate the troubled international relationship between Japan and South Korea. In turn, the tribulations of that relationship feed back into negative sentiment about Koreans in Japan. While overt racism in the style of anti-Korean hate demonstrations by groups like the Zaitokukai is thankfully rare and limited to a small number of blowhards, an undercurrent of racist beliefs and distrust is far more widespread in the population.

As a result, it’s entirely possible that Koike’s negative actions towards the Korean community reflect a political calculus rather than (or alongside) a personal dislike – not least because suspicion and racism towards Zainichi Koreans was a major stumbling block for Tokyo’s previous governor. Yoichi Masuzoe was keen to build upon the working relationship between Seoul and Tokyo, and his plan to lease the Shinjuku school site, agreed upon in a meeting with former Korean President Park, incensed conservatives. Hard-right (uyoku) elements online attacked Masuzoe viciously over the plan, accusing him of supporting foreigners over the needs of Japanese people. While it’s hard to say how much this contributed to his ultimate downfall in the wake of an egregious expenses scandal, it was notable that the right-wing press (which often, though not always, softpedals over scandals involving LDP heavyweights) went for the jugular over expenses, even as online right-wing activists bashed Masuzoe over his “pro-Korean” stances. Koike’s decision to visit the proposed school site during her campaign and announce her plan to overturn the lease may, then, have been carefully calculated – a preempting of a problem that had undermined her predecessor.

If this is a political calculation, it implies that Koike lacks the moral compass required to recognise or care about the damage done in the process

If this is the calculation Koike has made regarding the Shinjuku school and the 1923 memorial ceremony, it is an ice-cold one, showing that she is willing to throw a sizeable minority group who have historically been treated poorly in the name of political expediency. There may be around 90,000 of them in Tokyo, with nearly 40,000 of those being Special Permanent Residents5Ministry of Internal Affairs and Communications, Statistics Office – December 2016 – access via e-Stat (who were born and have lived in Japan for most of not all of their lives), but they can’t vote, even in local elections, making them a fairly safe target for an ambitious politician, in the short term at least. On the other hand, conservatives turn out to vote in droves, and while Koike remains popular with them for now, she likely feels a need to balance out her attacks on the Tokyo LDP with some sops to their former supporters. In this sense, she is simply playing a numbers game, and lacks the moral compass required to recognize or care about the damage done in the process.

Koike’s approach to dealing with Tokyo’s Korean residents gives hints of her future trajectory – and shows how difficult it will be for this regional leader to become a major national opposition force. She likely intends to return to the national stage after 2020, and while a reintegration into the LDP as a returning star is a possibility, most commentators expect her to try to piece together a strong opposition coalition. Her willingness to pander to conservative hardliners at the expense of minority groups, however, strongly suggests that any attempt by Koike to position herself as an opposition figurehead would fail. Japan’s opposition benches are a fractured place not least because its role is often to represent minority groups shut out of the LDP’s mainstream policy processes. As such, many opposition politicians will balk at Koike’s attitude and track record, resulting in yet more opposition division and in-fighting. The national politicians presently aligning themselves with Koike also hew strongly conservative and right-wing, suggesting that Koike will approach national politics not as an opposition unifier to the left of the LDP, but as a rabble-rousing figure to the LDP’s right.

In the process, she will likely lose a large swathe of the uneasy coalition that has swept her to such a dominant position in Tokyo. Korean residents of Tokyo are a low-risk target, but things are more complex on a national level. Many hundreds of thousands of naturalized Koreans (who can vote), their families, and their friends live in Japan – over 130,000 have naturalised since 2000 alone6Ministry of Justice, 「帰化許可申請者数，帰化許可者数及び帰化不許可者数の推移」 – and they mostly live in urban areas that any opposition force would need to win to challenge the LDP. Notably, there is a higher concentration of Korean residents and naturalised Koreans in Osaka than in Tokyo, and Osaka has been far more proactive than Tokyo in enacting legislation against hate speech to shut down right-wing demonstrations in Korean areas and in front of Korean schools. It also seems likely that young people, who would need to be energized to turn out and vote for any hopeful opposition force, will be turned off by cynical political appeals to the worst instincts of older conservative voters. Petty anti-Korean gestures may be a low-risk strategy for the short-term – but if Koike cannot rein in these impulses, they will do no favors to her long-term ambitions.