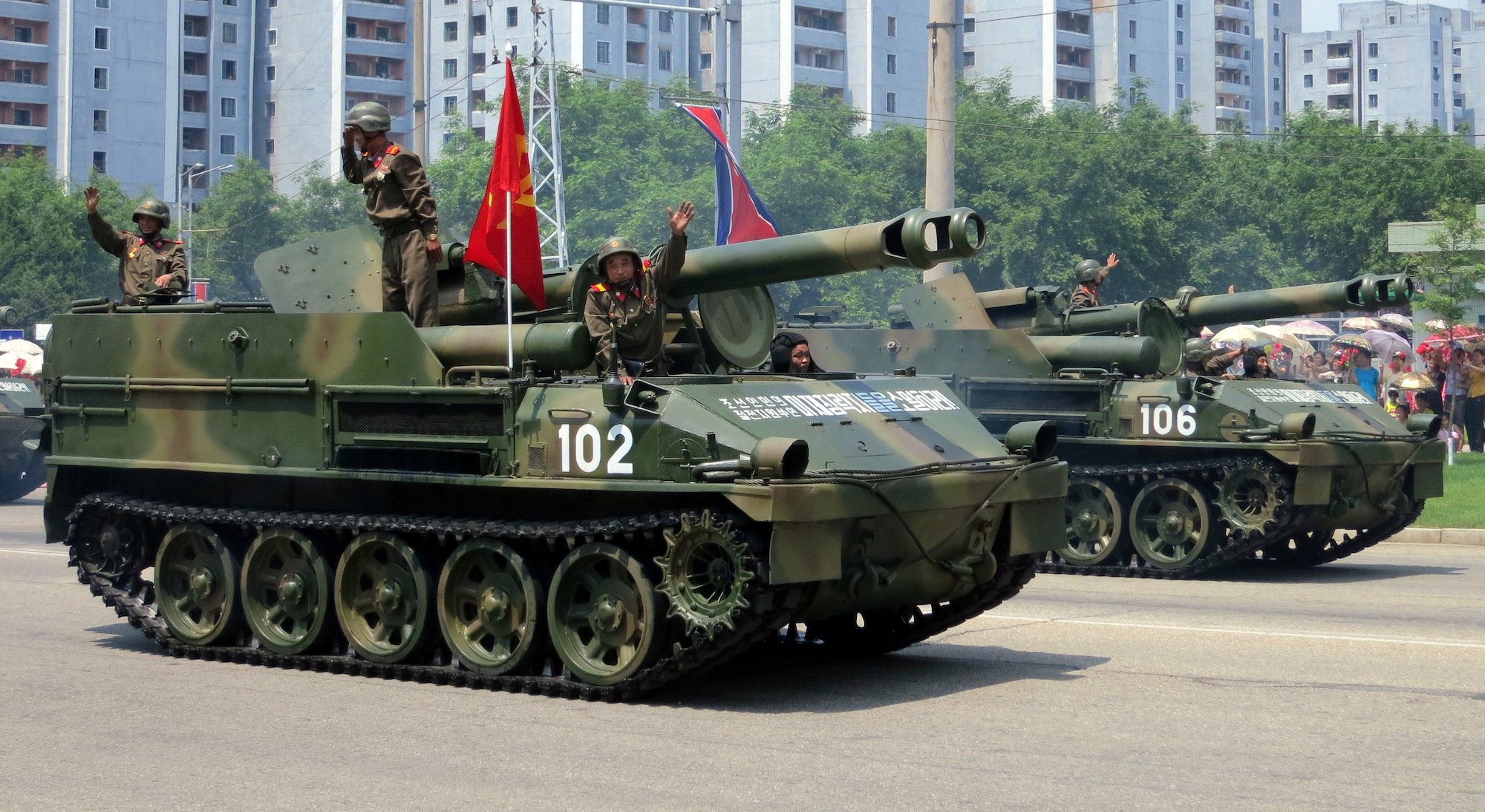 Tension over North Korea’s missile and nuclear programs recently took a startlingly intimate turn for residents of Japan’s northernmost prefectures, who were awakened on the morning of August 28 by the blaring of the J-Alert emergency broadcast system. The system, a combination of text messages and air raid sirens, exhorted citizens to take cover from the Hwasong-12 intermediate-range ballistic missile (IRBM) streaking through the skies over Hokkaido.

The test itself was noteworthy both for the technological breakthroughs achieved and its resemblance to a more conventional launch scenario, rather than a simple static test. Advances in the North’s missile program were a prelude to an even graver development: the testing of what was in all probability the DPRK’s first thermonuclear weapon. While experts have debated whether the yield was in the hundreds of kilotons or megaton range, or whether it was a true thermonuclear design or a “boosted fission” weapon, all observable evidence points to a city-buster capable of being mounted atop an ICBM.

The Japanese government trotted out the usual tough-sounding platitudes in response. Referring to the launch and test as an “intolerable and grave threat,” the Abe administration promised swift action at the UN, increased coordination with the United States, and more powerful defensive weaponry for the Self-Defense Forces. To this end, the Defense Ministry has signaled its intent to purchase the Aegis Ashore missile defense system, increase the range of Japan’s Patriot PAC-3 terminal interceptors, and continue development of the exo-atmospheric Standard Missile (SM) 3 Block IIA interceptor with the United States.

Beyond these near-term moves, however, lies the heart of the issue: just what are the North Koreans trying to accomplish with the development of their missile and nuclear programs, and how do the tests affect the viability of the U.S.-Japan alliance? Analysis of North Korean nuclear strategy suggests an intent to move swiftly at the outset of a conflict to hold U.S. Pacific bases at risk, followed by the United States homeland. The strategy is one known as decoupling: a drive to devalue the U.S. deterrent and split the allies by threatening American population centers in countervalue strikes should the United States intervene to stop the North Koreans.

Japan seems intent, in the medium- to long-term, on having its cake and eating it too

Decoupling is not a new phenomenon: fears about such alliance-splitting festered within NATO amidst the development and eventual perfection of the Soviet ICBM in the late 1950s. Worried that the United States would no longer have the stomach to defend Europe at the risk of losing a city of their own, NATO nations took two approaches. The first, by France, was withdrawal from the NATO command structure and the development of an independent nuclear deterrent. The second was spearheaded by Great Britain and the other allies, who sought to envelop the United States ever further into NATO – including a drive to explicitly threaten a nuclear response to a conventional Soviet invasion of Europe. The resulting campaign, and especially the Berlin crisis, helped to convince the Kennedy administration that adopting a no-first use pledge would render the U.S. deterrence guarantee toothless, thereby fully “decoupling” the United States from their allies.

History would then indicate that the alternatives for Japan seem to be either further alliance enmeshment or the construction of a serious deterrent independent of the United States. But rather than seeing this as a binary choice as the Europeans did during the Cold War, Japan seems intent, in the medium- to long-term, on having its cake and eating it too.

On one hand, Japan has steadfastly sought to tie the United States closer in the alliance. This has taken the form of new bilateral institutions like the high-level economic council chaired by Deputy Prime Minister Taro Aso and U.S. Vice President Mike Pence, as well as Japanese requests that Trump administration officials repeat the U.S. stance that the Senkaku islands are subject to the mutual defense treaty. Shrewdly taking into account Trump’s mercurial nature and his susceptibility to flattery, Abe himself gifted the U.S. president with a gold-plated golf driver worth nearly four thousand dollars. Abe has pointedly refused to comment on Trump’s more controversial policy moves, like his so-called “travel ban,” public vacillation on the utility of NATO, and moral equivocating on white supremacist protesters in Charlottesville, Virginia. Staying on Trump’s good side and delegating trade issues to Aso and Pence has allowed Japan (and the alliance) to escape the withering public criticism Trump had to offer for another front-line U.S. ally, South Korea. Finally, Japanese officials vociferously objected to a proposal at the end of the Obama administration that would have seen the United States officially renounce the first use of nuclear weapons, arguing that such a move would further play into the appearance of decoupling between the allies.

On the other hand, Japan has simultaneously sought to increase its autonomy. Traditionally, foreign and security policy in Japan trickled from the bottom of the Ministry of Foreign Affairs and Ministry of Defense (historically the Japan Defense Agency) bureaucracy up to the elected leadership; policy making was sclerotic, bound by institutional inertia, and deferential to the United States and the Ministry of Finance. To permit for greater control over the bureaucracy,  the Abe administration has quietly (yet pervasively) redesigned the apparatus governing national security deliberation. Among the most significant of these administrative changes has been the empowerment of the National Security Council (NSC), a body chaired by Abe and his advisor Shotaro Yachi. As evidenced by its ordering of the JS Izumo on Japan’s first collective self-defense escort mission and its command over the National Security Strategy planning papers, the NSC has demonstrated both micro-operational control and macro-strategic planning, giving Abe greater control over the national security and foreign policy bureaucracy than any of his predecessors.

More slowly, Japan has also developed its offensive and defensive capabilities in the hopes of hedging against any possible decoupling. In addition to planned investments in missile defense, the Defense Ministry is also studying the possibility of purchasing a “high-speed glide bomb,” perhaps in the hopes of developing a stand-off strike capability. The study’s author, Itsunori Onodera, is now defense minister, and it is possible that Japan may move forward with the purchase of the Norwegian Joint Strike Missile, giving its F-35 fighters far greater striking range. These moves have come amidst other moves to improve Japan’s defense capacity (though not directly related to the issue of decoupling) like the development of the XASM-3 high-speed anti-ship missile and studies on the adoption of the SM-6 anti-aircraft/strike missile.

But in the immediate near-term, Japan is likely to avoid decoupling by hugging the United States more closely rather than focusing on pressing ahead with a fully independent deterrent. Even given the severity of the threat posed to Japan and the health of the alliance, the Abe administration cannot simply snap its fingers and direct the Defense Ministry to immediately purchase new weapons and design new doctrines – defense procurement in Japan is a long, drawn-out process, with major weapons systems purchases, along with significant changes to the SDF’s order of battle and doctrine, outlined in the National Defense Program Guidelines and Mid-Term Defense Program documents that must percolate through the Defense Ministry’s bureaucratic deliberation process. Particularly when it comes to weapons pertinent to the “strike enemy bases” debate, like the Joint Strike Missile, there are legal and constitutional hurdles to surmount even before the MOD procurement and planning process can begin. These reports are published only every few years, but a revision is indeed coming up soon.

Until the recommendations and plans from those documents become clear, however, or unless meaningful revision of Article 9 occurs in the near-term (an extraordinarily unlikely event), Japan’s anti-decoupling strategy is likely to tilt towards hugging rather than hedging against abandonment by the United States.