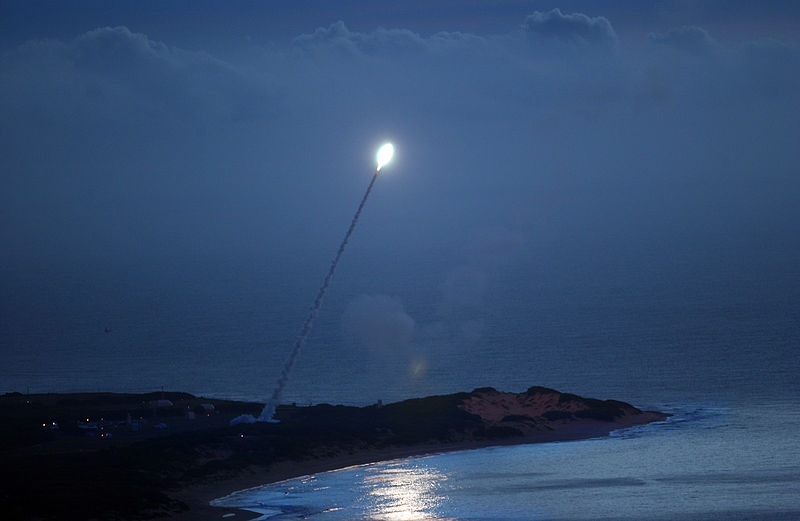 The do-something faction of the U.S. foreign policy commentariat has worked itself into a tizzy over the North Korean missile threat. Recent editorials have called for the shoot-down of DPRK missile tests, and most disturbingly, the government is also considering the interception of missiles that do not pose a threat to U.S. or allied territory.

Put simply, this is utter folly. A policy of shooting down DPRK missile tests both grossly misunderstands the posture of U.S. and Japanese ballistic missile defense (BMD) forces and ignores the dire political consequences of a failed interception attempt.

Before delving into the particulars of the allied missile defense system, it is worth reviewing the basic flight profile of a ballistic missile. As the word “ballistic” would imply, ballistic missiles follow a ballistic trajectory, a parabola with a beginning, apogee, and termination. At the beginning of the arc, the adversary ballistic missile ignites its rocket motor and begins its ascent, this stage is referred to as the “boost” phase. After exiting the Earth’s atmosphere, the rocket motor burns out and the missile’s warhead (along with various submunitions and “penetration aid” decoys) separate from the body of the missile – the “midcourse” phase of the ballistic arc. The reentry vehicle (which contains the warhead) then descends through the atmosphere on its way to the target, and this is known as the “terminal” phase.

Shooting down DPRK missile tests both grossly misunderstands the posture of U.S. and Japanese BMD forces and ignores the dire political consequences of a failed interception attempt

U.S. and Japanese BMD systems operate in a tiered fashion, referred to in BMD jargon as “layering.” These multiple layers are designed to intercept ballistic missiles at various points in their trajectory. At present, U.S. and allied missile defenses are designed for interception in the midcourse and terminal phases. Though boost phase is considered the optimal point of interception, with the warhead riding atop a volatile mixture of burning rocket fuel wrapped inside a fragile metal or carbon fiber shell, no systems capable of boost phase interception exist. The United States did attempt at one point to develop a boost phase interceptor, a massive chemical laser stored in the nose of a repurposed 747, but the project was canceled. Boost phase interception with presently available technology is tempting but strategically difficult. Though the airborne laser worked (at least in principle), it had to be positioned close to the launch site. While this afforded a clear shot at the missile, it also exposed the lumbering, defenseless aircraft to engagement by fighter aircraft or surface-to-air missiles.

Allied BMD efforts, then, focus on midcourse and terminal interception. Midcourse coverage is provided by the Aegis missile defense system, a combination of battle management software, radars (the AN/SPY-1) and the Standard Missile (SM)-3 carried aboard BMD-capable destroyers, cruisers, and the land-based Aegis Ashore system. The SM-3 is a hit-to-kill missile, deploying a kill vehicle that destroys the adversary warhead with kinetic force rather than with an explosive blast. The missile comes in a number of variants, the block IA and IB versions, with the IIA under development by the United States and Japan. The IB improves upon the first block with an improved seeker, while the IIA features a more powerful rocket motor for faster interception and a higher maximum altitude. Under optimal conditions, the missile intercepts the target warhead in the early midcourse phase, while the warhead is still on an upward trajectory. The ceiling and maximum speed of the SM-3 IA and IB are classified, but experts estimate that the missile’s closing speed and sensor layout preclude boost phase interception, and that the SM-3 is rather slow compared to adversary missiles. Altitude estimates for the IA/IB versions are 600 km, while the IIB, with its larger motor, will be significantly higher.

Terminal interception capability is provided by the Terminal High Altitude Area Defense (THAAD) and Patriot Advanced Capability (PAC)-3 systems. THAAD is designed for both exo- or endo-atmospheric interception (either in late midcourse or terminal phase), while the PAC-3 destroys incoming ballistic missiles with a blast fragmentation warhead in the last moments of their terminal descent. Both THAAD and the PAC-3 have lower maximum ceilings than the SM-3. Still in testing is the SM-6, an anti-air and anti-shipping missile that has shown limited capabilities against ballistic missiles in the terminal stage.

Advocates of a DPRK missile test shootdown fail to understand the physical limitations of these BMD systems, particularly with regard to the geometry of an interception shot. When North Korean missiles travel over Japan, they are in space; experts estimated the altitude of the 14 September launch at 650-700km when passing over Hokkaido. Simply put, it would be impossible to shoot at a missile following this sort of trajectory with an SM-3 IA or IB, let alone the PAC-3 or THAAD (based in South Korea or Guam).

Placing Aegis ships closer to North Korea so that they can attempt a boost phase shot within the SM-3’s apogee is also impossible. Not only would doing so place allied vessels at risk of attack by the North Koreans, but an SM-3 IA or IB would simply be traveling too slowly to keep up with a North Korean IRBM or ICBM. While the exact positions of Aegis BMD ships are classified, a map from the U.S. Defense Science Board illustrates BMD ships stationed in the Sea of Japan. This positioning is designed to cast a west-to-east defensive “shadow” over Japan, as is consistent with the SM-3’s early-midcourse interception profile. These BMD stations are chosen as the result of educated guesswork on the part of U.S. and Japanese defense planners, who must allocate scarce missile interception resources to defend many significant resources. Surveillance assets, like the AN/TPY-2 and X-band radars designed for discriminating between warheads and decoys, are similarly deployed for defending allied physical territory rather than open ocean.

Assigning BMD forces to shoot down a test launch would require vanishingly small probabilities of good luck in guessing the correct trajectory so that an intercept solution could be formulated. It would necessitate the stationing of BMD ships east of Japan; taking away precious resources to protect the open ocean rather than defending population centers and military resources. It is possible that a shot could be attempted with the SM-3 IIA, but the missile has not yet finished testing and has yet to be deployed.

Proponents of shooting down North Korean missile tests also have little notion of the bureaucratic process designed to delegate alliance BMD responsibilities. Given the scarcity of BMD ships and interceptors, the brief window of time in which an intercept can be attempted, and the vast array of possible U.S. and Japanese targets located in Japan, the United States and Japan have negotiated with the goal of reaching an understanding of who shoots at what. The allies have together worked towards creating a joint (and highly classified) list of important assets, called the critical asset list (CAL). From this, each military is assigned a list of must-defend targets, the defended asset list (DAL). These lists and procedures are designed to make the most out of the 6-10 minute window between missile detection and impact. They are not designed to quickly and accurately delegate alliance responsibility for protecting a swath of open ocean.

Given the tremendous physical and bureaucratic hurdles to successfully intercepting a North Korean test launch traveling on an unknown trajectory, advocates of the policy are dooming the allies to interception failure. Should the United States or Japan fail in an attempt to down a test launch, the consequences would be grave. Not only would allies lose confidence in the systems they have spent decades (and hundreds of billions of dollars) developing, but a failure would embolden the North Korean leadership to continue pushing the envelope. It would serve as further confirmation that the United States has developed a coercive theory of victory regarding the North, a change from previous decades of containment and relative restraint.

Should the United States or Japan fail in an attempt to down a test launch, the consequences would be grave

Even if successful, interception of a North Korean test missile will do almost nothing to deter the regime from further missile tests or atomic development. With the U.S. president threatening to “totally destroy” the North, and with U.S. B-1B bomber aircraft flying closer and closer to the DPRK, it is clear to the leaders of North Korea that the United States intends to put them on death ground. Failure or (vastly less likely) success, an allied shoot-down of a North Korean missile will almost certainly be met with retaliation. The North’s theory of victory depends on rapid escalation, guaranteeing the North Koreans further demonstrate their resolve to the United States as they have in the past.

With technical and political hurdles looming large, little to be gained from a successful interception and much to be lost in case of failure, shooting down a North Korean test launch is a deeply misguided and dangerous policy course.