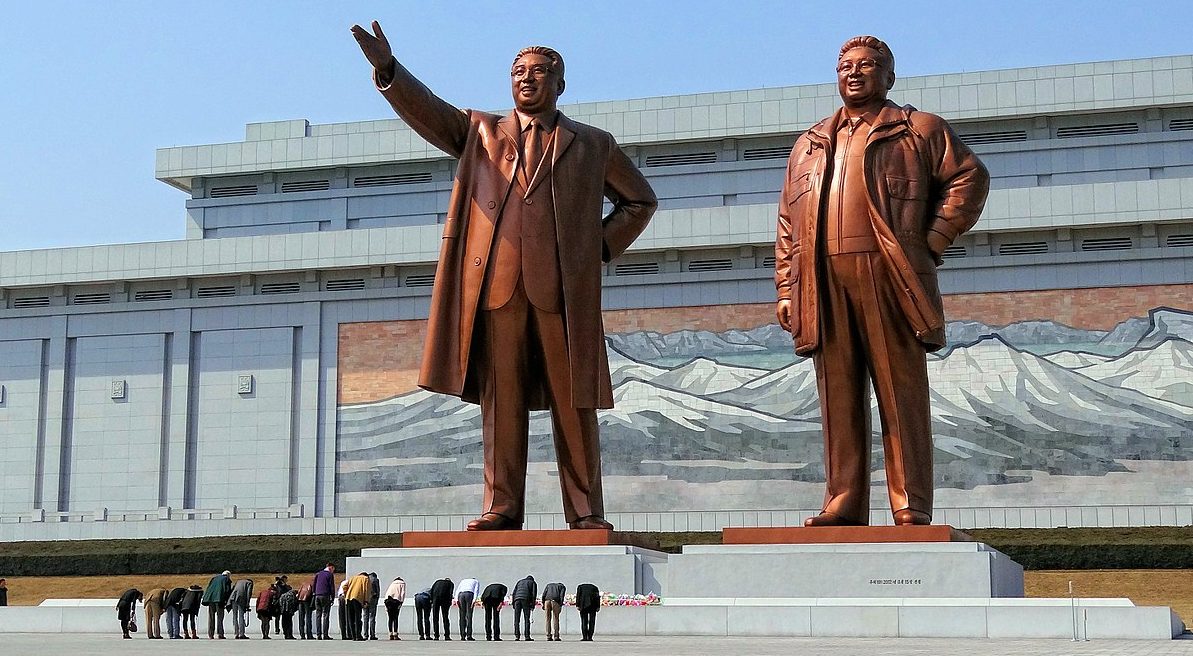 Missile and nuclear tests by North Korea are met with fury and disbelief in Japan and the US; but Kim Jong Un is following the cold logic of survival.

Last week brought a North Korean missile test which passed over the Japanese archipelago and set off an early warning public alert across the north of the country1Choe Sang-Hun and David E. Sanger, “North Korea Fires Missile over Japan“, New York Times, August 28 2017; then, last weekend, what appears to have been a successful test of a hydrogen bomb2Ankit Panda and Vipit Narang, “Welcome to the H-Bomb Club, North Korea“, War on the Rocks, September 4 2017. The escalating tensions between North Korea and its enemies – most notably the United States, though Japan finds itself right in the firing line – are arguably the world’s most dangerous and worrying international flashpoint.

As the rhetoric has ratcheted up, it has become de rigeur in both the United States and Japan to refer to North Korea in terms suggesting madness, evil, or both; the “hermit kingdom” and its hereditary dictators are dangerous to their neighbours, a threat to the world, and almost incomprehensibly brutal to their own suffering people. The actions of Kim Jong-Un, from his haircut to his hydrogen bombs, are presented as crazy and incomprehensible; he is a comic book villain, an evil madman with dangerous toys.

In truth, North Korea’s motivations – and those of Kim Jong-Un – are not complex. Nor are they crazy, and certainly not incomprehensible. The North Korean regime has one overarching motivation: survival. North Korea doesn’t want to be invaded or toppled. Specifically, the Kim dynasty, and current leader Kim Jong-Un, doesn’t want to be deposed. Every decision made; every escalation, every new weapon, every show of force or extended olive branch, they are all in service of achieving that one goal, regime survival.

Kim Jong Un watched Saddam being pulled from a hole in the ground and hanged; he saw Gaddafi being hauled from a drainage ditch and savagely killed

“Hermit kingdom” it may be, but North Korea’s regime sees the news; it even gets the Internet. Placed on the Axis of Evil list back in the early 2000s, it has watched what happened to other countries on that list, and to other nations and regimes targeted by the US and the international community. Kim-Jong Un has seen Iraq and Afghanistan invaded; he has watched Saddam Hussein being pulled from a hole in the ground and hanged, and has seen the footage of Muammar Gaddafi being hauled from a drainage ditch and savagely killed by rebel forces3Stacey Yuen, “How the miserable death of Moammar Gadhafi factors into Kim Jong Un’s nuclear ambitions“, CNBC, July 10 2017. Most recently, he has also seen Iran agreeing to walk back its nuclear program and admit IAEA inspectors in exchange for relaxed sanctions – only to have the Trump administration hint strongly at reneging on the deal4Jana Winter, Robbie Gramer, Dan de Luce, “Trump Assigns White House Team to Target Iran Nuclear Deal, Sidelining State Department“, Foreign Policy, July 21 2017 despite full Iranian compliance5Jonathan Tirone, “Iran Is Sticking to the Nuclear Deal, IAEA Says“, Bloomberg, August 31 2017.  To Kim and his regime, these events highlight the lethal costs of failing to deter intervention in North Korea, while the uncertainty around the Iran deal, most worryingly of all, implies that the US may not be relied upon to negotiate in good faith with its foes.

To ensure its survival, the North Korean regime applies a logic which is straightforward, if grim; it aims to show its enemies that it has the capacity to inflict enormous damage upon them if attacked, making the costs of any such attack prohibitive. It fears that if it pulls back from its military ambitions, as Iran has, it will be swapping short-term relaxing of sanctions for long-term security. By easing off on weapons development, it risks being seen as a relatively easy target in future – a quick, low-cost military victory for a U.S. leader in an interventionist mood. American appetites for interventionism may ebb and flow as administrations change, but the possibility is never anywhere but top of mind for North Korea’s leadership. The U.S. interventionist doctrine in Afghanistan and Iraq will only have firmed up the North Korean belief that it remains on the menu; that without deterrence, the United States will eventually come back to finish the job it started in the 1950s.

For decades, the heart of North Korea’s deterrence was the many hundreds if not thousands of artillery pieces – mostly Cold War vintage – which line the North Korean side of the Demilitarised Zone and are within firing range of the densely populated metropolis of Seoul6Stratfor Worldview, “How North Korea Would Retaliate“, January 5 2017. These weapons are old but effective; while not all of them could be brought to bear at once, and U.S. and South Korean forces would work quickly to shut them down7Kyle Mizokami, “Could North Korea Annihilate Seoul with Its Artillery?“, The National Interest, April 25 2017, the civilian death toll before they could all be silenced would likely be staggering. North Korea would likely fall quickly in any conflict; even though almost the country’s entire economic output is poured into its military (B.R. Myers describes this national programme as being more similar to Japan’s military-centric controlled economy in the 1930s than to any actual Marxist or Stalinist state) it has been decades since the country’s military was any match for the South, let alone U.S. forces. Its artillery would serve only to make the cost of that victory – in terms of civilian lives in South Korea – enormous8David Wood, “North Korea’s Simple but Deadly Artillery Holds Seoul and U.S. Hostage“, Huffington Post, April 18 2017. In the past, this guaranteed that the North would be left alone, guaranteeing the survival of the regime.

The take-away message is simple; “if you attack us, you will win, but the cost will be astronomical”

With that guarantee of deterrence as context, North Korea’s development of more advanced weapon systems has been largely an insurance policy. It was never truly at the heart of the regime’s survival efforts, as evidenced by its willingness to slow or shut down parts of its weapons programmes in return for aid or relaxed sanctions in the past.

Since the turn of the century, however, the North Korean regime has been feeling far less confident in the deterrence capacity of its artillery and other conventional armed forces. It may fear that technological progress is leaving its artillery deterrent behind, or simply that the calculus which made the United States and allies like Japan value Korean lives over the removal of the Kim regime is no longer as firmly held as it once was. In that case, North Korea needs something else to function as deterrence; some other way to make the cost of an invasion or military intervention far too high for its enemies.

Its missile and nuclear programmes are precisely that. With the capacity to strike Japan (a key U.S. ally and host to large U.S. military bases), Guam, and possibly parts of the continental United States, North Korea is attempting to reestablish its deterrent. The take-away message is simple and familiar; “if you attack us, you will win, but the cost will be astronomical.” The rhetoric of President Trump and his administration will only have deepened the regime’s sense of urgency in acquiring these weapons; Trump has stated that a preemptive intervention in North Korea would result only in deaths “over there,”9Uri Friedman, “Lindsey Graham Reveals the Dark Calculus of Striking North Korea“, The Atlantic, August 1 2017 further implying that he does not take the existing artillery deterrent seriously, as the deaths it would cause would be Korean deaths. Hence, North Korea presently believes that it can only survive as a nation if it has the ability to deter U.S. intervention with the threat of nuclear attack on U.S. soil, or at least on U.S. military bases.

None of this is insane; it is horrific and it is brinksmanship that puts the lives of thousands if not millions of civilians in the balance, but it is a rational pursuit of the North Korean regime’s central, overwhelming raison d’être – its own survival. The potential that this expansion of the deterrence sphere from South Korea to Japan and now to the United States might drive a wedge between the United States and its allies – perhaps even decoupling their alliance10Benjamin Rimland, “North Korea: Decoupling the U.S.-Japan Alliance“, Tokyo Review, September 5 2017 as doubt is cast on the U.S.’ willingness to “defend Seoul at the cost of San Francisco” – is important to consider but remains unlikely; the real objective of North Korea is simple deterrence, as it has always been. The stakes have been raised, but that underlying logic is what has maintained the uneasy peace on the Korean Peninsula for decades.

The real concern – for Pyongyang, for Seoul, for Tokyo and for every other country in the region – may be that the United States, presently led largely by men with no foreign policy or diplomacy experience and experiencing severe shortfalls in staffing in key positions across the State Department, is no longer fully cognisant of the balance of risks and deterrence involved in this situation. North Korea must, of course, continue to be made aware that the cost of striking a South Korean, Japanese, or U.S. target would be the total destruction of the regime, as Defense Secretary James Mattis pointed out this week11Matthew Nussbaum, Bryan Bender, Brent D. Griffiths, “Mattis warns of ‘massive military response’ if North Korea threatens attack“, Politico, September 3 2017; but overblown talk of “fire and fury” will only serve to further convince North Korea that it is at risk of U.S. intervention.

It is vital that both players in this dangerous game recognize that the cost of preemptive action from their side makes it untenable. Failure to acknowledge that is utterly destabilizing; until both sides feel secure that neither will take preemptive action, this situation will continue to escalate.