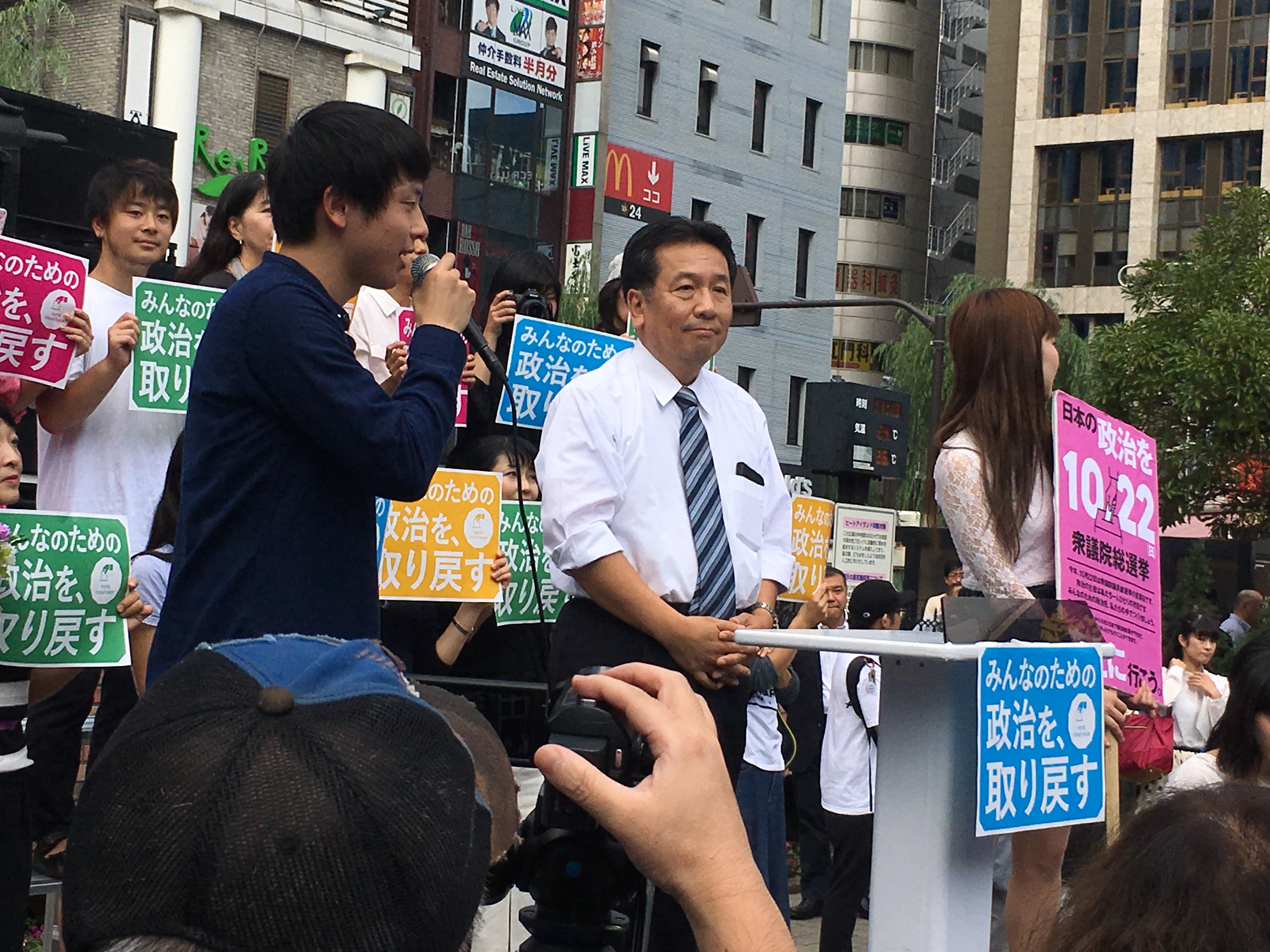 2017 was a tumultuous year for Japan’s political opposition. The Democratic Party all but collapsed after newly-elected leader Seiji Maehara dramatically announced that it would not nominate any candidates for October’s snap election. His intention seemed to be an ideological clear-out of the party’s left-wing and pacifist elements, whom right-wing and centrist opposition politicians have long believed to be holding them back from making electoral gains. Maehara wanted his ideological counterparts to join the much-hyped Party of Hope, backed by Tokyo Governor Yuriko Koike, and leave the left-wingers to sink with the mortally damaged Democratic Party ship.

Maehara indeed got an ideological clear-out; just not quite the one he wanted. The Party of Hope stumbled from one unforced error to the next, while the Democratic Party’s left-wingers rallied behind Yukio Edano to create a new political force, the Constitutional Democratic Party of Japan. The CDPJ gained 40 seats in the election, starting with 15 and ending up the largest opposition force in the Diet with 55; the Party of Hope lost 7 seats to end with 50, and has seen its polling numbers collapse in subsequent months to the point where it languishes well behind the Japanese Communist Party in most polls.

The CDPJ finds itself (no doubt to the consternation of their former DP colleagues who were certain that Edano and his ilk were dragging the DP down) in the position of being the most viable opposition force Japan has produced since the old DPJ’s fall from power, and grace, in 2012. Its support numbers hover in the mid-teens in most polling, solidly ahead of the numbers the Democratic Party ever enjoyed in the post-2012 era. Moreover, the party has plenty of room to grow; its weak point in the 2017 election was the fact that it was forced to recruit aggressively in order to field candidates, resulting in it supporting many inexperienced and largely unknown new faces. Its success means that many of those newcomers are now in the Diet and will enter future elections with experience, recognition, and incumbent advantage, which can be turned either to their own campaigns or to support those of colleagues. It also means that candidate recruitment for future elections will be vastly easier.

CDPJ’s success means that many of those newcomers are now in the Diet and will enter future elections with experience, recognition, and incumbent advantage

The problem, of course, is that there aren’t actually any elections for the CDPJ to contest in 2018 – the iron is hot, but there’s nothing to strike. The bad news is that support and enthusiasm for new parties can easily fade outside campaign periods, especially if the party struggles to keep itself in the headlines. Much of 2018 is undoubtedly going to be dominated by speculation around September’s leadership election in the LDP, which will suck much of the oxygen from the opposition’s media profile. The good news, however, is that a year without elections might give the CDPJ time to establish the kind of structures and networks the party will need to really compete seriously in future campaigns, and that this year’s political calendar is filled with opportunities for the party and its leadership to make its mark.

This is, after all, a year in which the question of constitutional reform is going to loom large. It seems increasingly likely that Prime Minister Abe will go for a somewhat token reform of the pacifist Article 9 rather than simply being content with putting his name in the history books by reforming one of the less contentious articles of the constitution (the extension of the free education guarantee to cover university education being an oft-floated notion). The CDPJ is well-placed to act as the focal point of opposition to any such reform – a role the DP would have struggled with, given its ideological rifts on the topic.

Moreover, if the CDPJ can continue to present a coherent and united face as a party, it will be well-positioned to benefit from the potential fractures that will develop in the LDP if September’s leadership election turns genuinely competitive. The settled coherence of the LDP under Abe has been one of its most powerful weapons against the scattered and in-fighting opposition parties it has faced until now; little turns voters off a party quicker than the perception of internal rifts and divisions, which massively undermines faith in the party’s competence overall. If the leadership race in the LDP turns bitter, a CDPJ show of unity will put them on a good footing to do well in the elections coming up the following year.

If the leadership race in the LDP turns bitter, a CDPJ show of unity will put them on a good footing to do well in the elections coming up the following year.

The CDPJ is not, of course, the only opposition party – in fact, opposition-related stories in the media have been dominated in the first few weeks of 2018 by the Party of Hope and the remaining rump of the Democratic Party (which retains many members in the House of Councillors, since seats there were not up for election last year). These parties’ support rates in opinion polls are drastically bad, rarely cracking 2 percent between them, but their discussions on a potential merger could have allowed them to leapfrog the CDPJ to become the largest opposition party nonetheless. The negotiations collapsed, which shouldn’t be a surprise given that prominent DP holdouts like former Prime Minister Yoshihiko Noda were among those “blacklisted” from the Party of Hope for their progressive leanings prior to the election – a snub which will hang over any future relationship. However, Noda has hinted that the DP remains open to talks if Hope distances itself from Yuriko Koike and her policy platform. Since the CDPJ seems (quite sensibly) to be fundamentally opposed to the notion of forming a joint caucus with the other parties, some kind of DP/Hope alliance will never be entirely off the cards. It’s quite possible that this on-off drama, while no doubt tremendously boring to most people outside shouting distance of Nagatacho, will be another factor sucking oxygen away from more substantive coverage of opposition politics this year.

The question hanging over all of this –arguably by far the most important question to ask of the CDPJ’s rise in popularity: are any of these changes are really putting Japan any closer to another change of government, or even the emergence of a proper two-party system? Of course, it’s undeniable that having a coherent and unified opposition force with clear policy preferences (at least in some areas – clarifying and developing its stance on a wider range of policy areas is another thing the CDPJ could do with working on in this lull between elections) makes the chance of a change of government higher. Short of a dramatic turn in public sentiment against the LDP (which of course cannot be ruled out, especially given the degree to which the party’s influence-peddling approach opens it up to the possibility of major scandal), however, it’s somewhat tricky to see how the CDPJ goes from its present position to holding a majority at least in the medium term.

Are any of these changes are really putting Japan any closer to another change of government, or even the emergence of a proper two-party system?

The party’s moderately left-wing policies are clearly far from the electoral poison Maehara and his ship-jumping colleagues used to believe; but neither have they proven any ability to build an electoral coalition beyond simply being the acceptable go-to party for everyone who doesn’t like the LDP. If that’s the case, the CDPJ’s success might simply see Japan’s political system undergoing reversion to the long-term mean of the “one-point-five party system.” Low turnout makes Japan’s electoral system more unstable now than it was back when the 1.5 party system held the LDP and the Japan Socialist Party in an unbalanced equilibrium, but the ground truth of the system remains the same, namely that a party which solely functions as an electoral refuge for those who dislike the LDP is not a party that will ever form a government. With no election to fight, the CDPJ’s biggest challenge in 2018 will be breaking out past the noise of Nagatacho and showing the country that it has more to offer than a protest vote.