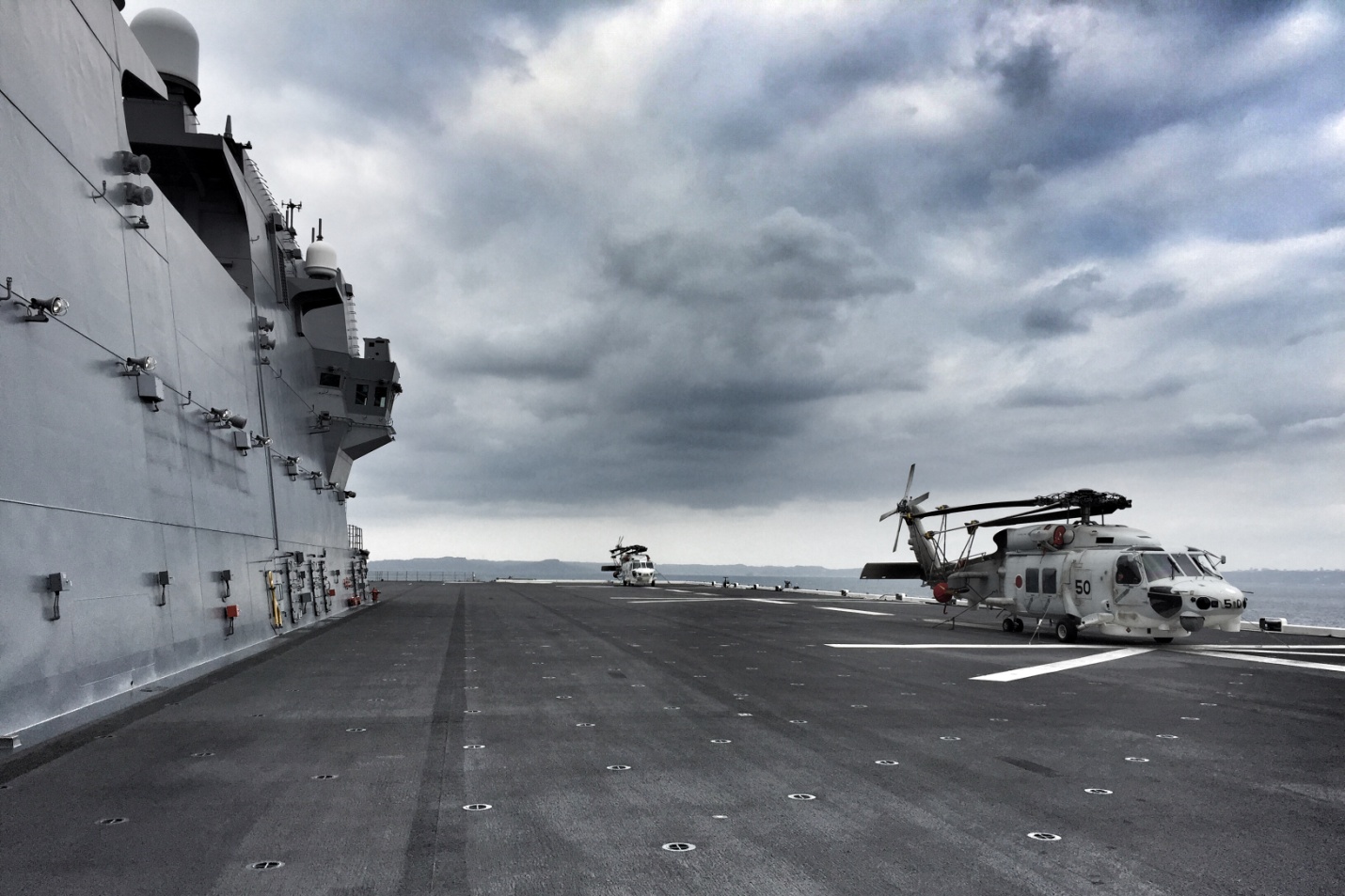 Last week, the ruling Liberal Democratic Party’s Research Commission on National Security published its formal proposal for shaping Japan’s next National Defense Program Guideline (NDPG) and Mid-Term Defense Program (MTDP) that are currently in work. Broadly defined, the NDPG provides the long-term direction for defense posture based on security assessments, while the MTDP offers five-year acquisition designs to meet those requirements. Thus, the purpose of the LDP commission was to shape those two important documents by delivering guidance to the Japanese interagency (specifically, the National Security Secretariat and Ministry of Defense, which both had representation in the research commission).

While certain aspects of the commission’s reports have already made the media, namely the desire to acquire F-35B for use aboard Maritime Self Defense Force (JMSDF) vessels and strike capability for hitting enemy bases, there were a great number of other items of interest for observers and analysts of Japanese security. Entitled “Realizing Cross-Domain Defense Policy,” the report carries forward existing themes such as seamless response to grey zone contingencies, improved joint interoperability, and strengthening the U.S.-Japan alliance while adding a number of valuable points that look to make the upcoming NDPG and MTDP among the most robust and fully-realized unilateral security documents Japan has ever produced.

Here’s a breakdown of the significant items from the LDP Research Commission’s proposal that has not yet hit the mainstream media:

It’s no surprise that the primary threats discussed in the LDP report were North Korea and China. What was surprising is the inclusion of Russia among those key threats, citing its annexation of Crimea and expanded military presence in the Northern Territories for training and exercises as causes for concern. The LDP purpose for including Russia is two-fold: first, the party wishes to align with the newly published U.S. National Security Strategy, which specifically calls out China and Russia as revisionist powers. Second, although the Japanese government, especially some members of the LDP, desire resolution of long-standing issues with Russia, this report sends a clear message that the LDP has no intention of breaking ranks on security posture in order to obtain a deal on the Northern Territories. A key takeaway here is to expect negotiations with Russia to continue be economy-focused, not security-focused, which should allow U.S. government officials to breathe a sigh of relief.

Per the LDP research commission, the next NDPG and MTDP will place extra emphasis on expanding Japan’s unilateral defense capabilities and breaking down interagency barriers within the government. Though not explicitly noted, this includes a desire to increase the defense budget closer to 2 percent of Japan’s GDP. The de facto 1 percent barrier is something that the LDP wants to eliminate once and for all, and the proposal clearly calls for a buildup of defense capabilities commensurate with each listed threat, as well as securing the budget necessary for combat-readiness and sustained operations.

To date, readiness for Japanese forces has been focused on the condition of “minimum extent necessary” (hitsuyō saishōgen). This has meant more of a “fight tonight” posture than preparedness for sustained military operations, leading to limitations on combat-readiness and insufficient reserves of personnel and war materiel. Refreshingly, the LDP report specifically notes the need for improvement in those areas. The proposal calls for increases in training opportunities abroad as well as development of amphibious landing and bombing training ranges within Japan (which will be critical for ensuring that the Self Defense Force is ready to employ any newly acquired amphibious and strike capabilities). It also prioritizes acquisition of ammunition stockpiles and development of ammunition storage areas in western Japan and Shikoku. Finally, the proposal calls for a more robust reserve component that can augment units at SDF bases throughout Japan.

Strengthening cooperation with partner militaries continues to be a theme for Japanese security practice. The LDP proposal maintains a continued focus on implementation of the 2015 defense guidelines and security legislation as a means of strengthening the U.S.-Japan alliance, though it additionally calls out the need to align more closely with the U.S. National Security Strategy. Beyond cooperation with the United States, the LDP proposal advocates for close cooperation with the United Kingdom, France, India, and Australia in order to support Japan’s “Free and Open Indo-Pacific Strategy.” The LDP’s choice to list those specific countries is significant from a legal basis because it offers the party’s definition of nations with whom Japan has a close relationship (kinmitsu na kankei). This definition opens up specific defense authorities that may be exercised with those states (logistics support, limited collective self-defense, etc.).

The LDP’s report recognizes the importance of information power by targeting acquisition of intelligence, surveillance, and reconnaissance (ISR) platforms and bolstering of the JSDF Attaché program. Importantly, the LDP also ties information security (INFOSEC) directly to the survivability of its bases. To date, the Japanese government has recognized the strategic importance of INFOSEC but has not done a sufficient job in incorporating it in its key security documents and programs. This suggests a desire to rectify that deficiency.

Japan is far behind other major powers on development and incorporation of unmanned aerial systems (UAS). Although Japan has a deal to acquire RQ-4 Global Hawk, it is still not operational. Further, there remains another major gap in medium altitude, long endurance UAS similar to the IAI Heron or recently retired MQ-1 Predator. The Japanese defense industry has been working towards acquisition of General Atomics’ “Guardian” (the civilian agency version of the MQ-9 Reaper), and the LDP proposal opens the door for formal inclusion of the Guardian and other unmanned ISR assets in the SDF inventory in the near-term.

The Japanese government has been making incremental progress on cyber defense for several years now, but the most significant inclusion in the research commission’s report is resolution of the legal relationship between a cyber attack and the right of self-defense. Since Japanese laws only recognize the right to exercise self-defense following an “armed attack,” there is a major gap in the government’s ability to respond swiftly to cyber warfare. Elimination of this seam will be important in shaping interagency cyber capabilities.

The LDP proposal offers some important insight to the party’s position on future overseas dispatch of SDF personnel. It calls for the deployment of SDF officials to command centers for internationally-sanctioned operations as well as the maintenance and utilization of overseas bases. What this suggests is that the LDP does not foresee an impetus to deploy entire units in support of international operations in the near future, but the party sees value in staying involved by offering limited numbers of officers to headquarters elements. It also means that the LDP wants to continue its employment of the SDF base in Djibouti for the long-term.

Interestingly, the LDP proposal seeks to tackle some demographic issues. A waning population and increasing number of alternative job opportunities has the potential of dramatically impacting SDF recruitment. The LDP research commission recognized that challenge and noted the need to target new recruitment programs (specifically calling for higher female recruitment) and increased numbers of reserve personnel. The proposal also suggests the employment of retired SDF officials and recommends studies on the potential for extending the retirement age of SDF members.

The relaxation of the “Three Principles on Arms Exports” to the “Three Principles on Transfer of Defense Equipment and Technology” was meant in part to support a more robust domestic defense industry. With no major deals completed yet, the LDP again wants to target this objective in the NDPG and MTDP. To do so, the proposal calls out incentive programs, government-directed prioritization of defense research and development, and increased cooperative development with partner nations and the civil sector (including universities and private companies). Interestingly, the proposal calls for inclusion of the Minister of Defense on the Cabinet’s Council for Science, Technology, and Innovation, which is a symbolic step in normalizing ties between the defense industry and other sectors in Japan.

Finally, the LDP proposal offers renewed commitment to U.S. forces realignment initiatives like the Futenma Relocation Facility (FRF) and relocation of U.S. Marines to Guam, while acknowledging the continued need for impact mitigation measures. This reflects LDP confidence in its ability to use impact mitigation (i.e. economic incentives) to achieve progress on realignment, which should dismay anti-FRF groups and eliminate some U.S. government concerns over a potential LDP-shift towards alternative solutions.

For those wondering whether or not the themes from a party-centric report like this will carry forward to bureaucrat-produced documents, one only has to look to other examples such as the LDP-Komeito “Concrete Direction for Security Legislation” and the resultant language in the 2015 “Peace and Security” laws. Ultimately, history suggest that most, if not all, of what the LDP’s Research Commission proposed in its report will be reflected in the upcoming NDPG and MTDP; thus, the aforementioned points will probably show up again with the publication of those key documents in the near future.