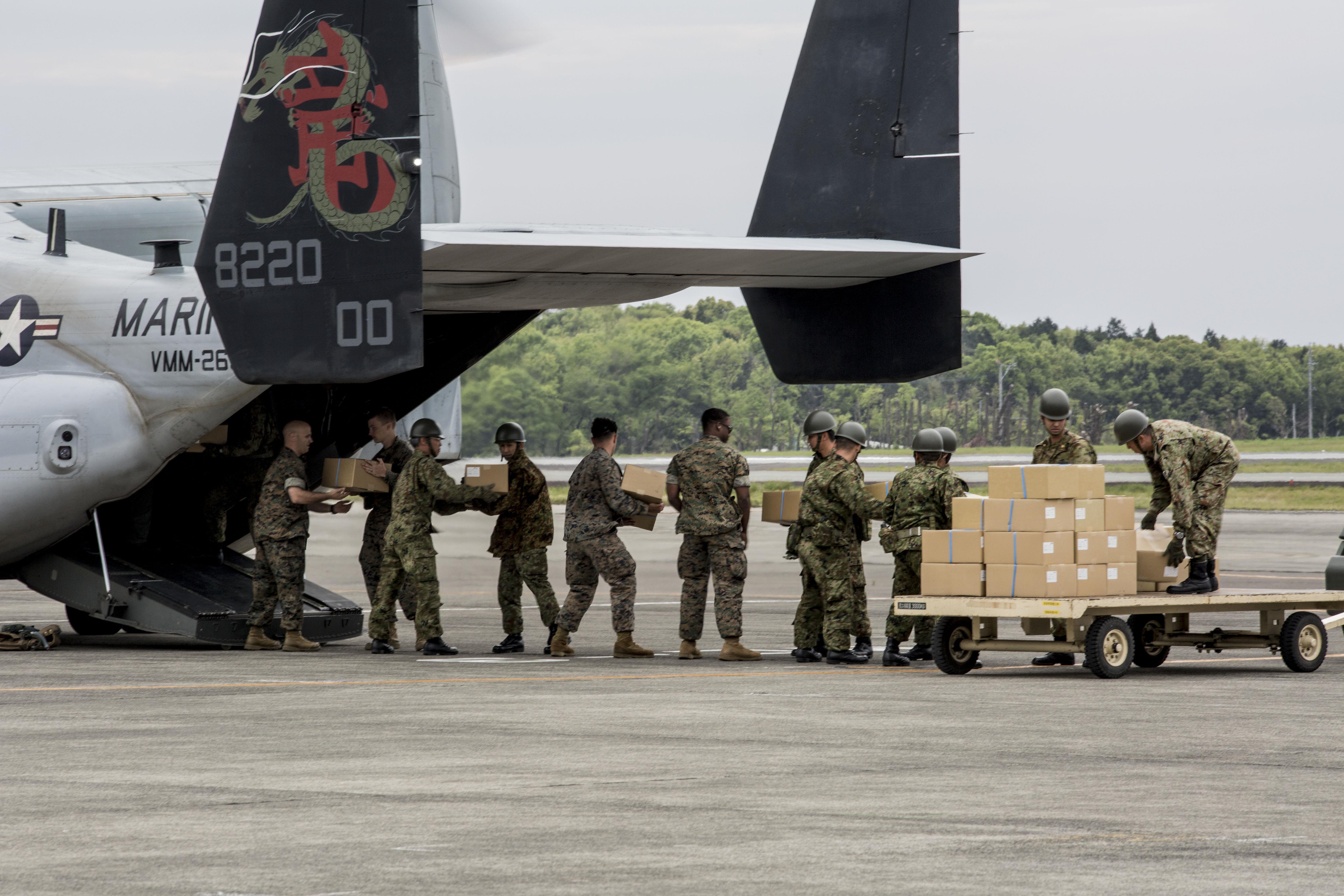 Sunday marks the seventh anniversary of the Great East Japan Earthquake and the triple disaster that led to tens of thousands of lives lost and incalculable damage to Japan’s Tohoku region. There are many legacies of 3/11, and while most are derivative of heartbreak and hardship, the legacy of solidarity in disaster relief operations between the U.S. military and Japan Self Defense Forces (JSDF) serves as a bright spot in an otherwise tragic event. The U.S.-led Operation TOMODACHI and Japan-led Joint Task Force (JTF) Tohoku saw unprecedented real-world operational coordination, and every success and mistake made in the wake of the disaster offered lessons learned that have had a lasting impact on the U.S.-Japan alliance.

The achievements and shortcomings of U.S. support to the Japan-led disaster relief operation following 3/11 are well-documented, though specific progress on incorporation of alliance lessons learned are worth review. Chief among those included (1) the need for conducting bilateral exercises in preparation for major disasters; (2) for establishing guidelines and a mechanism for alliance coordination on disaster response; (3) for the Japanese government to communicate clear requirements and requests for U.S. support during disaster relief operations; and (4) for the U.S. military to take measured action related to those requests. The intervening seven years have seen much progress based on these lessons learned, as detailed below.

Immediately following Operation TOMODACHI, the U.S. military began sending observers to Japan’s annual large force disaster-relief exercise, “Joint Exercise Rescue,” or JXR. The exercise is primarily run out of Japan’s Joint Staff Office and Ministry of Defense, but there are participants from up to 15 other ministries and agencies. The U.S. role started out simply as “white cell” members, informing Japanese exercise participants on what they could expect from U.S. forces; after all, it would be impractical for the Japanese to exercise based on assumptions about U.S. provision of capabilities that were simply not feasible. From there, U.S. presence in the exercise grew larger every year, and now headquarters U.S. Forces, Japan and each of the component forces (Navy, Air Force, Army, and Marines) participate in coordination centers at the Ministry of Defense, Yokota Air Base, and the JSDF’s JTF headquarters for the exercise. None of this happened before  3/11, but every exercise since brings the U.S. military and JSDF closer to readiness in preparation for a large scale disaster.

Additionally, prefectures from all over the country began inviting U.S. military assets to join their prefectural and municipal disaster readiness exercises. While it was common practice for U.S. forces to support disaster drills in their home prefectures even before 3/11, a lesson learned from Operation TOMODACHI was that increased familiarity on both sides – the U.S. military and local communities – outside of those home prefectures is helpful in facilitating smooth operations should disaster strike. Shizuoka, Wakayama, Kochi, and Miyagi prefectures are just a few that have included U.S. forces in their disaster drills since 3/11.

Although there were no institutional changes in alliance roles, missions, and capabilities immediately following Operation TOMODACHI, when the two governments negotiated the 2015 Guidelines for U.S.-Japan Defense Cooperation (better known simply as the “Defense Guidelines”), domestic and international humanitarian assistance/disaster relief (HADR) operations were included as mission sets for the alliance. This was a significant step for two reasons: first, it further expanded the roles of the alliance partners beyond defense of Japan or rear area support missions in the region. Under the 1997 Defense Guidelines, the rigid adherence to those specific scenarios made for inflexible alliance action in response to other forms of crisis and contingency. Second, this addition normalized a requirement for U.S. military interaction with the broader Japanese interagency. Any crisis or contingency in Japan and the region, disaster-related or otherwise, will require a whole-of-government approach to alliance activities, but prior to the 2015 Defense Guidelines, the alliance was principally confined on the Japanese side to the purview of the Ministry of Foreign Affairs, Ministry of Defense, and Cabinet Secretariat (with select exceptions for Status of Forces Agreement issues like frequency management and air traffic control). The inclusion of disaster relief in the new Defense Guidelines provides the basis for routine interaction between the Japanese interagency and U.S. forces, which offers linkages and familiarity critical in the event of a major disaster and which may also be useful in a broader range of security crises.

The establishment of the Alliance Coordination Mechanism (ACM) on November 3, 2015 also represents a legacy of 3/11. Although the inadequacy of the former Bilateral Coordination Mechanism (a product of the 1997 Defense Guidelines) was well-known among defense officials on both the U.S. and Japanese sides, the fact that it could not be employed to support the massive operations in Tohoku following the triple disaster yielded understanding to the broader policy audience of the impetus for change to the mechanism. The new ACM therefore incorporated lessons learned from Operation TOMODACHI and JTF Tohoku, being a standing mechanism (no requirement for cabinet-level “activation”), being available for use in response to any crisis or contingency (including disaster relief), and incorporating three levels (the policy, joint military-to-military, and component military-to-military levels) for seamless coordination on alliance cooperation in everything from tactical-level mission execution to strategic-level decision making.

The ACM and the practice gained through exercises following  3/11 were put to the test in April 2016 when a series of powerful earthquakes struck Kumamoto Prefecture and surrounding areas in Kyushu. Immediately following the first major earthquake, U.S. and Japanese defense and foreign affairs officials were in contact, coordinating what sort of capabilities the Japan Self-Defense Forces would require should the Japanese government request U.S. assistance. Ministry of Defense officials quickly noted airlift as a critical shortfall and identified requirements for cargo aircraft for troop movements and rotary wing assets for delivery of supplies to disaster-affected areas. That information reached relevant intergovernmental officials via the ACM. When the Japanese government declared a national emergency and delivered the request to the U.S. government, the U.S. military was ready to provide C-130 cargo aircraft, UC-35 passenger aircraft, and MV-22 tilt-rotor aircraft to support JTF Chinzei, the JSDF-led operation.

The entire process here was measured and appropriate, made smoother through the use of the ACM. The patience in waiting for specific capability requests ensured the correct employment of resources to meet Japanese requirements. Meanwhile, the rest of U.S. forces in Japan remained postured to support as necessary while continuing to execute their standard missions under the Mutual Security Treaty. The ACM provided a mechanism for bilateral operations that ensured seamless cooperation at the policy and operational levels. These were all lessons learned from  3/11, and carried forward to this important operation.

Of course, all of these successes aside, challenges still remain. The principal challenge is the expectation gap, in part the product of the disparate disaster relief responsibilities that the JSDF and the U.S. military maintain. The JSDF is resourced and equipped to conduct disaster relief as one of its main mission sets; after all, the JSDF conducts over 500 disaster relief operations (of varying scale) per year. The U.S. military, however, only conducts disaster relief by exceptional request, and typically at the behest of USAID’s Office of Foreign Disaster Assistance. While the Marine Corps in Okinawa maintains a Humanitarian Assistance Support Team (HAST) and is the predesignated lead for JTF-505 (Pacific Command’s in-theater foreign disaster response JTF), disaster relief operations are a secondary mission set, and equipment and funding can be problematic.

Another contributing factor is the lack of contingency plans for alliance cooperation in response to a large scale disaster in Japan. The Japanese government maintains specific plans for major disasters with a higher probability of occurrence (an earthquake in the Nankai Trough, for example), but no such bilateral component to those plans exist. Participation in exercises such as JXR help to manage expectations vis-a-vis those major events, but lack of U.S. input during Japanese contingency planning invariably leads to gaps in understanding between allies.

Further exacerbating expectation management is the plethora of disaster relief agreements made at the local levels between individual installation commanders and the surrounding base hosting communities. While these are all made in good faith, they constitute an obligation of U.S. resources which may otherwise be tasked to satisfy other higher-level priorities following a major disaster. The lack of commitment at operational levels and over commitment at the local base levels is a recipe for disarray should a major disaster strike Japan again.

Those challenges are significant, but importantly, are only known to the U.S. and Japanese governments thanks to lessons learned from cooperation in exercises and real world missions since  3/11. The road ahead is straight forward: marry up local disaster response agreements with operational level expectations between the U.S. military and JSDF; continue bilateral disaster relief exercises; and engage in discourse outside of formal exercises on realistic, actionable bilateral disaster relief capabilities and options. The tragedy of the triple disaster is still felt seven years later, but the legacy of Operation TOMODACHI and JTF Tohoku live on through progress made in advancing the U.S.-Japan alliance.