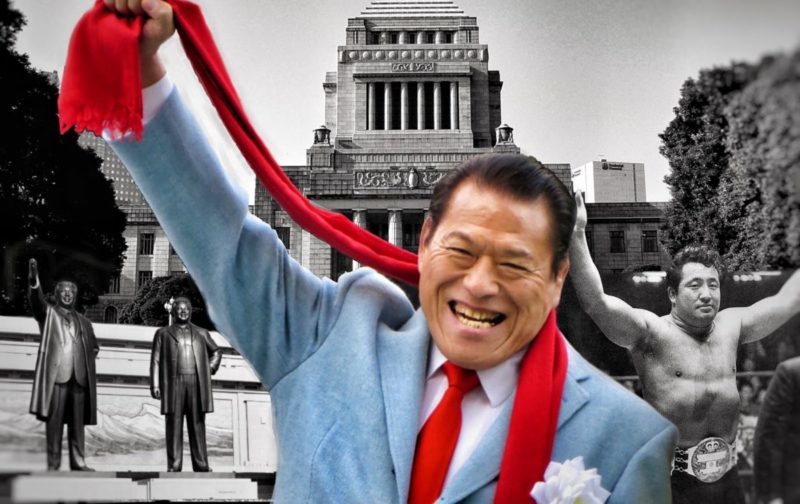 Antonio Inoki – politician, former pro wrestler and advocate for peace with North Korea – has led a complex life that tells us much about postwar Japan.

On September 6, pro wrestler-turned-Upper House lawmaker Antonio Inoki made his 33rd trip to North Korea. This time, as with previous trips, Inoki headed to the Korean peninsula with a message of peace, though he did not do so as an official envoy of the Japanese government. In fact, Chief Cabinet Secretary Suga implored him not to make the trip and the House of Councillors has previously censured him for traveling to the Democratic People’s Republic of Korea.

Inoki’s visits to North Korea, especially given the current climate of tension and uncertainty, are highly unusual – but then again, Inoki and his career are pretty unusual as well. What, one might reasonably ask, is a pro wrestler doing in the House of Councillors? How does the notoriously homogenous Japanese Diet end up with a politician named “Antonio”? And why does Inoki keep going to North Korea?

The answer to those questions is that Antonio Inoki is an individual who sits at the intersection of a fascinating set of socio-political issues from both the Showa and Heisei eras – a life touched by everything from the Japanese diaspora to Brazil, the postwar pro wrestling boom, the yakuza, zainichi Koreans, and the thorny history of North Korean relations. The story of Antonio Inoki and his Tōkon Gaiko (“Fighting Spirit Diplomacy”) offers a unique window into Japanese politics and society.

“Antonio” and the Japanese Diaspora

Antonio Inoki was born as Kanji Inoki in wartime Yokohama but by adolescence would find himself far from Japan. His family owned a coal store that fell on hard times when his father died soon after the war’s end. Conditions only worsened for the Inoki family after the Allied occupation ended. Struggling to find stable income and to recover from the war years, they opted to emigrate – joining the large ethnic Japanese community in Brazil. It was there that “Antonio” became the adopted name of the future Japanese lawmaker.

The Japanese diaspora began during the period of Meiji industrialization, when large numbers of Japanese facing difficulty in finding work at home opted instead to travel abroad in search of economic activities. Several places became popular destinations – Hawaii, Guam, and the Japanese colonies – but after the United States restricted migration by Japanese citizens in 1907, Brazil became the top choice for migrants from Japan. The first group of 971 Japanese migrants arrived in Brazil in 1908, and by the time the Inoki family arrived in the post-war era, the country was already home to over 150,000 Japanese immigrants. Today, there are an estimated 1.9 million Brazilians of Japanese descent. In subsequent decades the return migration of Brazilians of Japanese descent, sometimes directly encouraged by Japanese government policy, became an important issue; many returning “Nikkeijin” Japanese Brazilians had difficulty resettling in Japan as a result of cultural barriers and discrimination. Inoki’s chosen name, Antonio, serves as a reminder of Japan’s direct ties to the South American nation.

Like many Japanese families in Brazil, the Inokis had difficulty adjusting to the language and culture, but young Antonio found his place in sports. With natural talent and sizeable build, Inoki particularly excelled in track and field events. He became an elite shot putter and javelin thrower, and it was his athletic performance in front of a traveling group of professional wrestlers that set him on a course to becoming one of postwar Japan’s most iconic stars.

Although the Japanese pop culture promoted by the modern “Cool Japan” campaign is a far cry from pro wrestling, in the early postwar era  the staged battles of the ring captivated Japanese and international audiences alike. With the Allied occupation came both a sense of defeat in the war and an influx of American pop culture – including pro wrestling, which rapidly caught on with Japanese audiences. The original champions of Japan’s nascent wrestling scene were all foreigners, but Japanese pro wrestlers began coming to the fore, the most popular of whom was Rikidōzan.

Rikidozan emerged as a folk hero in an era when the Japanese people were searching for a symbol of strength. The formidable wrestler started his athletic career in the quintessentially Japanese sport of sumo, making it all the way to the third highest rank of sekiwake before trading the sumo dohyō for the pro wrestling ring in 1950. Training with prominent American wrestlers, Rikidōzan quickly parlayed his skills and charisma into becoming a champion in the ring, defeating such pro wrestling icons as Lou Thesz, “Classy” Freddie Blassie, and The Destroyer. Arenas in Japan sold out and crowds would gather to watch broadcasts on televisions mounted in public squares. His bouts were a national spectacle and while Japan’s interest in pro wrestling has waned over time, Rikidozan remains a symbol of Japanese resurgence in the postwar era.

Along with vanquishing foes in the Japanese arenas, Rikidōzan was also a cultural ambassador whose pro wrestling career led him to travel around the globe to perform. One of his destinations was Brazil, where while observing a track and field demonstration, a stand-out performance by a young Japanese immigrant caught his eye. Rikidōzan offered to take him on as an understudy, and Inoki returned to Japan under the wing of one of the country’s most famous men.

Under Rikidōzan’s tutelage and network, Inoki rapidly ascended in the pro wrestling world. His popularity exploded after his mentor’s untimely death at the hands of a Yakuza gangster in 1963. Inoki carried on the torch of Rikidōzan’s legacy, with his unique looks – he boasts a chin that would put Jay Leno to shame – and signature catchphrases like “Genki Desu ka!?” and “Ichi…Ni…San…Da!” making him into a pop culture icon both at home and abroad. Breaking out beyond pro wrestling, he organized and fought in mixed martial arts matches with greats like Muhammad Ali (1976) and made his way into cinema with cameos like his short role in Bad News Bears Go to Japan. Inoki levied his success into independent promotions and business ventures, establishing the financial and economic base for his future life as a politician.

Inoki has won two House of Councillors elections in his career. His first foray into politics was in 1989 when he joined the House of Councillors as a member of the Sports Peace Party (Supōtsu Heiwa-tō). After a lengthy hiatus following the end of his first term in 1995, Inoki returned with a victory in the 2013 Upper House election. His stated goal in both of these terms has been what he calls Tōkon Gaiko, or “Fighting Spirit Diplomacy.” In short, Inoki’s core political belief is that adversarial nations can be opened to peace through sports diplomacy – a principle that he has been willing to back up with actions. In 1990, after Saddam Hussein’s army invaded Kuwait, moving Kuwait-resident foreigners (including 245 Japanese) to Iraq and preventing them from departing the country, Inoki went on an unsanctioned peace mission with musicians and athletes and negotiated the release of 41 hostages while staging a two-day sports and music event in Baghdad. In 1995, just a year after the North Korean nuclear crisis, he organized the “Collision in Korea,” a pro wrestling event which he headlined with American wrestling icon Ric Flair. Again, in 2014, Inoki brought American and Japanese pro wrestlers to North Korea in a bid to kindle some form of engagement.

How can a pro wrestler make it into the Japanese Diet, not once but twice? In fact, Inoki’s success in the House of Councillors is not entirely an outlier, as elections for the House of Councillors use an electoral system that can favour unconventional candidates. The chamber provides continuity with long six-year terms and does not have single member districts, meaning that electoral politics is not as localized as it is for Lower House politicians. Since Councillors face election far less frequently and are not beholden to a specific constituency, candidates with some broad popularity, name recognition, or a reputation for expertise have a reasonable chance of winning seats even without political pedigree. This system has allowed some unconventional figures to make careers in the House of Councillors, but is balanced by the Upper House holding relatively little institutional power within Japan’s Diet; the more powerful House of Representatives has budget-making authority and the ability to override the House of Councillors’ decisions.

As a result, the House of Councillors includes not just career politicians, but a rather eclectic group of high-profile individuals. Examples include Masahisa Satō (aka Hige no Taichō), the mustachioed former Ground Self-Defense Force colonel who earned his spot on the ballot for his defense expertise; Seiko Ishizaki, a former Olympic athlete who won her Diet seat while training for the 1996 Atlanta games; and Takayuki Shimizu, a former Asahi TV announcer known by his fans as “ShimiTaku.” In this crowd, a pro wrestler who successfully launched and sustained multiple business ventures is not all that unusual.

Hidden within this backstory is the key to why Inoki has been to North Korea 33 times now – and why he remains adamant that peace between the two nations is possible. Largely unknown to the public during his soaring career as a pro wrestler, Inoki’s mentor and folk hero Rikidōzan was actually born Kim Sin-rak in Hamgyongnamdo, a province in what is now North Korea. During the colonial years, young Rikidōzan was sent to Japan and adopted into a family in Nagasaki – subsequently giving his name as Mitsuhiro Momota. Rikidōzan was a zainichi Korean, a designation that has traditionally carried the burden of heavy discrimination in postwar Japan. As he became a powerful symbol of Japanese strength in the postwar era, Rikidōzan’s Korean heritage was concealed, and it was not until after his death that his true heritage started to be known to the wider public.

Of course, as Rikidōzan’s apprentice Inoki knew all along of his real home and identity. This personal connection has been the source of Inoki’s long-standing ties to the DPRK. His trips to North Korea began long before he entered politics, when he would travel there to pay respects to his late mentor’s family; it was only after his election to the House of Councillors that the trips took on a broader meaning. While media outlets may dub Inoki “Japan’s Dennis Rodman,” there is a deeper interpersonal and human factor at the foundations of the lawmaker’s interest in North Korea.

Inoki would face reelection in the summer 2019 House of Councillors election, though he has not indicated a desire to run for another term. At 75 years old and with his health in decline, his political career may be coming to a close. In a way, it would be appropriate timing for Inoki’s retirement from public life. His story has been one touched by so many of the great social and political issues of postwar Japan; now it seems that the conclusion of its political aspect, at least, will coincide with the end of the Heisei era.