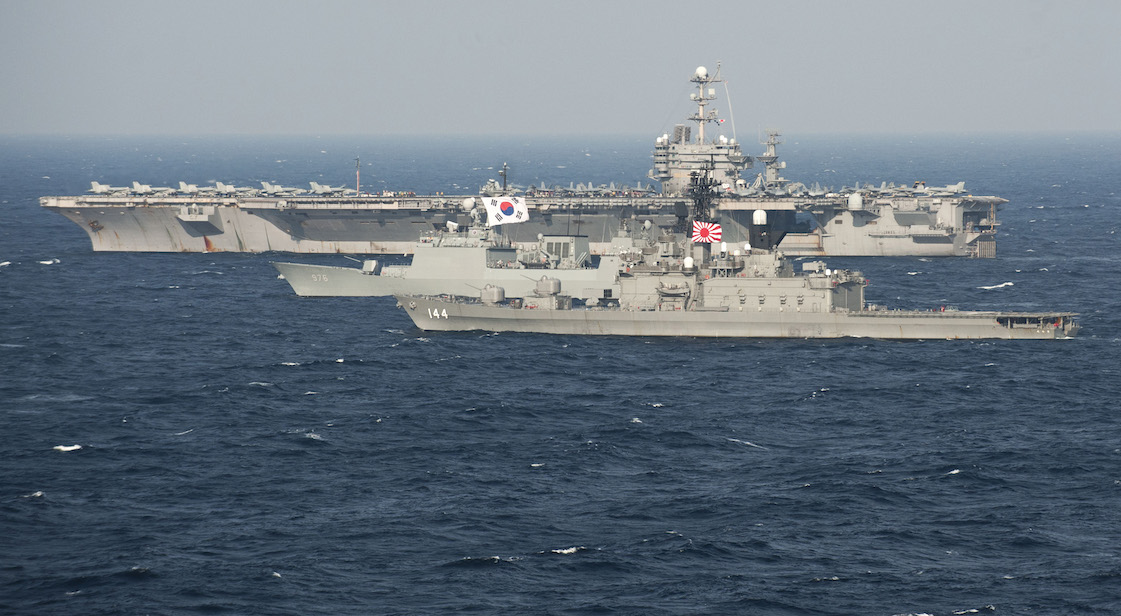 Japan withdrew from South Korea’s International Fleet Review after a dispute over flags – which belies good progress in the nations’ security ties.

Nearly a dozen nations sent vessels to participate in South Korea’s International Fleet Review earlier this month – but Japan’s Maritime Self-Defense Force (JMSDF) was very conspicuously absent. The reason was a diplomatic spat over a flag. The Korean government challenged the JMSDF’s use of the traditional “Rising Sun” naval ensign, which it sees as being a symbol of Japanese imperialism;  the Japanese government maintained that as an internationally-recognized symbol, its use is not subject to negotiation. The two sides were at an impasse; the JMSDF ended up sitting out this once-a-decade military ceremony.

On the surface, this spat over flags seems to reinforce the notion that historical issues form an insurmountable obstacle to closer, sustainable ties in the important Japan-South Korea security relationship. The reality, however, is that the International Fleet Review is largely a ceremonial event – highly publicized, but operationally speaking one of the least important kinds of military cooperation. It was a low-risk target for a shot of history politics, the loss of JSMDF participation being a consequence the South Korean government was willing to bear if the Japanese side did not back down. Looking at the wider picture, it is clear that where cooperation between the two sides really matters, history politics has not formed a barrier to deeper ties and progress in the security relationship.

This is not to downplay the importance of the politics of history to both countries – but its weight differs in relation to proximity to the Korean Peninsula and to perceptions of necessity. The two nations have mutual security interests that drive cooperation, and progress towards those ends remains on track. North Korea aside, as major powers vie for hegemony in the region both Japan and South Korea have an interest in supporting a rules-based international order to counter coercive behaviors. Outside of the region, both nations support United Nations operations, and both recently deployed peacekeeping forces to South Sudan. The flag incident reminds us of the sorts of political speed bumps that Japanese and South Korean policy makers will encounter, but belies the strong efforts being made to posture the two nations for an increasingly complex security environment.

In the background, cooperation between Japan and South Korea remains on track

South Korea invites many nations to its International Fleet Review once each decade, and the Japanese Self Defense Force has participated in the two prior events. This time, however, the Korean government insisted that participating nations fly only their nation’s flags and the South Korean flag. This was done as a rebuke to the JMSDF’s “Rising Sun” flag that was the same as that flown by the Imperial Navy during Japan’s period of Asian conquest. Arguing that the JMSDF ensign is an internationally recognized symbol flown during port visits across the globe, the Japanese government refused to change its protocols, electing to abstain from the event rather than to accede to the Korean request. During the event, the Korean navy compounded the issue when it broke its self-imposed policy and flew a Yi dynasty flag representative of Korea’s repulsion of Japanese invaders in the 16th century, an act which the Japanese government subsequently protested.

In the background of this dispute, however, cooperation to support the mutual security interests of Japan and South Korea remains on track. Since 2012, there has been a steady increase in strategic-level dialogues. The countries took steps to increase information sharing, eventually signing a General Sharing of Military Information Agreement in 2016 which has been maintained despite the change in administration from Park Geun-Hye to Moon Jae-in. The two nations started sending observers to field-training exercises and began laying the groundwork to do the same in command post exercises. There are ongoing personnel exchanges between the JSDF and South Korean military. In an important real-world example, when South Korean peacekeepers were engaged in conflict and needed ammunition in South Sudan, Japan responded swiftly, pushing the limits of its existing security laws to deliver small arms ammunition to Korean peacekeepers.

Further, recent government appointments signal desires to keep improving military ties. The appointment of Jeong Kyeong-doo, a former Air Force chief of staff and chief of the Joint Staff signaled continuity in bi-/multi-lateral initiatives. Jeong was a central figure in the aforementioned progress since 2012, so his ascension to minister yields a voice within the Moon administration that is supportive of existing policies towards military cooperation. Meanwhile, Chief of the Japan Joint Staff Katsutoshi Kawano has overseen unprecedented levels of JSDF cooperation with the South Korean military, and newly appointed Minister of Defense Takeshi Iwaya was supportive of the controversial Japanese transfer of ammunition to South Korean peacekeepers as well as other efforts to strengthen security ties. Beneath those leaders is an array of bureaucrats and uniformed officers that maintain solid counterpart relationships and work towards long-term cooperation.

History and nationalism can at times impede military-to-military cooperation

This is not to say, however, that the politics of history and nationalism cannot at times impede certain areas of military-to-military cooperation. In these cases, Korean nationalism tends to be a greater obstacle to near-term objectives than Japanese nationalism, with three factors influencing decision-making: proximity to the Korean peninsula, media visibility, and perceptions of necessity. Proximity simply means how close to peninsula proposed cooperation is supposed to be – this may generally be categorized as on the peninsula, in the vicinity of the peninsula, regional, or global. Ultimately, the closer to the peninsula, the more politicized decision-making regarding the activity becomes.

Media visibility is how publicized the event is, whether in preparation or execution. This is often a byproduct of the scale of cooperation; that is, larger scale efforts usually draw greater media attention. Still, leaks to the press also play a role and can generate stumbling blocks to cooperation. In general, the greater the media visibility, the higher the potential for political scrutiny. Finally, perceptions of necessity regard four factors: the strategic and/or operational importance of proposed cooperation, reciprocity, bureaucratic influence, and the role of the two nations’ mutual U.S. ally.

Entangled with questions of history and nationalism is the question of reciprocity, which remains a point of contention between Japan and Korea. In sum, the Japanese government is wary of giving too much lest the Korean government balk at returning in kind, while the Korean government is skeptical of how much utility the Japanese government is actually able to provide. This is where bureaucrats (both uniformed and civilian) come in, as they can negotiate reciprocity and facilitate decision-making. The role of the United States is also important. Long-time Asia-hand Victor Cha highlighted the impact that perceptions of reliability of the United States have on the Japanese and South Korean “quasi-allies,” but it also plays the role of mediator in pushing for greater bi-/tri-lateral ties.

Given this background, it is understandable why the International Fleet Review fell victim to history politics. It took place within Korean territorial waters off the coast of Jeju, was a highly publicized event, and is of little real consequence to security. Neither bureaucrats nor the U.S. were going to push hard for this activity; so given low risks all round, the Korean government took an opportunity for a crowd-pleasing shot and the Japanese government did not back down.

Despite this spat, defense cooperation will continue. Already, Defense Ministers Jeong and Iwaya met on the sidelines of the ASEAN Defense Ministers’ Meeting, with the flag incident bearing only minor mention amidst discussions on mutual security efforts.  Meanwhile, three ROK Naval vessels carrying 600 military cadets will make a port call next month to the Japanese port of Sasebo, and other efforts remain underway. Cooperation in and around the peninsula continue to be difficult, but that does not mean progress will not be made elsewhere. It will simply be important for policymakers to understand limitations based on the politics of history and nationalism and maximize the opportunities available for advancing shared security interests.