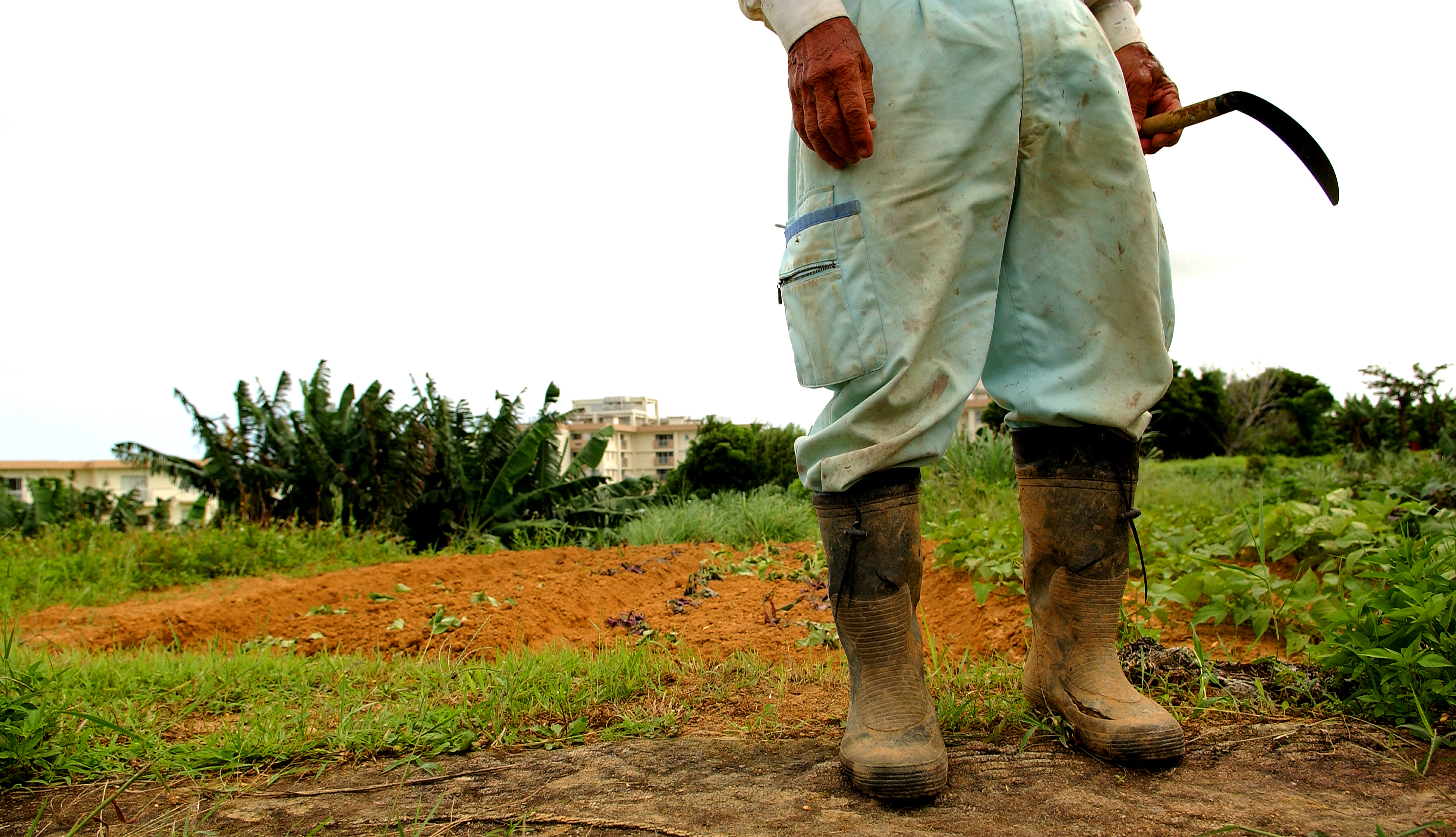 When it comes to base-hosting issues in Okinawa, there is a tendency of looking at stakeholders as binary groups—Okinawa versus the mainland, Okinawans versus the U.S. military, or the Okinawan government against the Japanese central government. Certainly, there is utility in the appearance of unity of interest. That is part of the reason why advocacy coalitions take names like “the All-Okinawa Coalition.” However, this practice can obfuscate an already complex political environment, and oftentimes stakeholders can mistakenly be conflated as one in the same – or may be obscured altogether. Some of those stakeholders are surprisingly powerful and affect Okinawan base-hosting policy designs without ever making the headlines: two of which are landowners and “tacit farmers.”

Understanding the interests and power of these landowners and farmers elucidates a few things. First, it helps explain why the Japanese government often prefers to build on reclaimed land – if the government builds its own land, there is neither need to lease it from anyone nor to renegotiate terms of the deal every few years.

Second, it offers perspective as to why it can be so difficult to manage “burden reduction” policies. Even something as conceptually straightforward as giving back land to Okinawan residents is not always a welcome prospect and can meet strong opposition and/or heavy, protracted negotiations.

Finally, it suggests that acreage may not be the best indicator for the amount of “burden” U.S. forces place on a segment of the Japanese population. For some Japanese, military-use land offers a financial incentive for hosting U.S. forces. For others, continued use could prevent prospects for development or introducing undesirable externalities. The conflict obscures the notion of whether U.S. forces presence is a positive or negative feature, especially in Okinawa.

The U.S. military operates from 133 facilities (bases, training ranges, storage facilities, etc.) in Japan, 82 of which are designated as “exclusive-use,” meaning the United States maintains primary administrative authority over the facility. 32 of those exclusive-use facilities are in Okinawa, covering about 55,000 acres. Despite having administrative authority, the land is not owned by the U.S. military and in most cases it is not owned by the Japanese government either.

The Japanese government maintains the right to exercise eminent domain but rarely does – the house that sits in the middle of the runway at Narita airport is a notable case in point,being the last bastion of protest that emerged when the Japanese government attempted to build an alternative to the increasingly congested Haneda airport in Tokyo. This same reluctance to exercise eminent domain predominates in dealing with U.S. military and even Japan Self Defense Force bases.

Rather than simply negotiating the purchase of land or employing eminent domain, the Japanese government leases the majority of military-use land from private owners. This means that every year, landowners receive non-taxable lease payments from the government. In Okinawa alone, there are over 10,000 people receiving an average of about two million yen (roughly 20,000 USD) annually in rents for land dedicated to U.S. military usage. Many of these landowners have received rents for decades, making the income from those leases a long-term factor in individual financial planning. In fact, the prospect of owning land and gaining government subsidies has become an investment venture and entire businesses emerged dealing in the exclusive trading and holding of gunyōchi (“military-use land”). Complicating matters is that many of these parcels of land would be worthless if returned, as they are too small or located in areas that would be difficult to develop for commercial or residential use. If returned, the individual landowners would be taxed instead of subsidized, so there is little incentive for them to advocate for return of land without distinct prospects for commercial sale or development. However, if there are lucrative economic opportunities, interests flip and landowners generally seek return of land as soon as possible to secure those opportunities.

Meanwhile, there are large parcels of land in Japan maintained under U.S. administration that are not necessary for day-to-day operations but are critical in the event of a contingency. As a result, this land would sit unused during peacetime, but U.S. authorities have made it available for “tacit farming.” Those tacit farmers not only receive the rents from the land lease but are able to access U.S. facilities for agricultural activities. Moreover, if U.S. forces damage the crops for whatever reason, the farmers are compensated for their losses even though the land is technically part of the U.S.-administered base. For those farmers, maintaining tax free land with access for farming is a great deal and there is little practical impetus for them to pursue return of those lands.

At both the prefectural and national level, landowners and tacit farmers influence politics. Often, they organize into committees to coordinate interests and to offer the government a single point of contact for managing all of the respective leases, though that is not always the case. Whether individually or by committee, these stakeholders each deal directly with representatives of the central government (typically the Regional Defense Bureau or Bureau of Local Cooperation), often putting prefectural-level authorities and interests on the sidelines. Meanwhile, the Japanese government’s reluctance to exercise eminent domain means that landowners and tacit farmers have an advantage in negotiating the terms of the leases and access. The only substantial factor limiting the power of these stakeholders is that they lose strength in negotiation without concerted numbers, meaning that if they split in interest between those that want return of land and those that want continued military use, it enables government representatives to divide and conquer.

The amount of U.S. exclusive-use land in Okinawa creates a greater variety of interests compared to Japan’s other prefectures

Landowner and tacit farmer stakeholders are by no means unique to Okinawa, but there are some notable differences between Okinawa and the other 46 prefectures. The biggest difference is the amount of U.S. “exclusive-use” acreage in Okinawa. It creates a greater variety of interests in each area of the prefecture; for example, landowners in the populous southern half of the island are far more interested in land returns than those with land in the jungle-thick northern half. Next, there is greater impetus for landowners to advocate for retention of land under military control. Of the 55,000 acres of U.S. exclusive-use land in Okinawa, roughly 30 percent is dedicated solely to training ranges and areas. By design, these areas are undeveloped and in less populated portions of the prefecture, meaning there is little-to-no immediate prospect for development. That contrasts heavily to the exclusive-use facilities on the main islands, which mostly house personnel and units and are often in urban or suburban areas. Finally, the paradigm for managing base-hosting relations is different in Okinawa than other prefectures. The unique sociopolitical relationship between Okinawa and the central government establishes a different institutional and political approach to managing stakeholder interests.

Land returns are a constant consideration for U.S.-Japan alliance managers. Provisions under the U.S.-Japan Status of Forces Agreement mandate that if U.S.-administered land is no longer necessary for use in peacetime or contingency operations, it must be turned over to the Japanese government. Further, land returns are a clear objective of the Japanese government’s “burden reduction” policies. In principle, the process should be as simple as signing paperwork and handing over the keys to the gates. In practice, the process is far more complex.

For landowners and tacit farmers, return of land means a cessation to subsidies and an increase in taxes

Managing the interests of these stakeholders is a major consideration in most burden reduction policymaking. These thousands of landowners have provided a necessary and valuable contribution to the alliance, so while some political forces may advocate for the expedited return of facilities and areas, the Japanese government is compelled (whether internally or externally) to consider the impact to the individuals who stand to face potential hardship based on a fairly significant change to their income or livelihood. Sometimes this leads to ad hoc negotiations when landowners want their land back for commercial or personal reasons. If it is land that the U.S. military is also looking to return, things can go smoothly. If not, then politics and protest usually follow.

Conversely, if the U.S. military wants to return land because it is no longer necessary to meet obligations under the alliance treaty, it is rarely a simple process. For landowners and tacit farmers, return of land means a cessation to subsidies and an increase in taxes. If the land happens to be in a place with little to no commercial value, it becomes an undesirable prospect. As a result, a long negotiation usually ensues between the Japanese government and relevant stakeholders to determine how to ensure that land returns do not come at a personal cost to individuals who have provided land to U.S. forces, oftentimes for generations. A typical outcome is the government purchase or continued leasing of the lands for public facilities or parks.

Ultimately, what this all highlights is that the stakeholders in Okinawa are many and varied, each with their own interests and power within the base-hosting paradigm. This complicates the policy environment, and while the inclination may be to lump all issues and stakeholders into binary categories, that only obscures an already complex and important problem set.