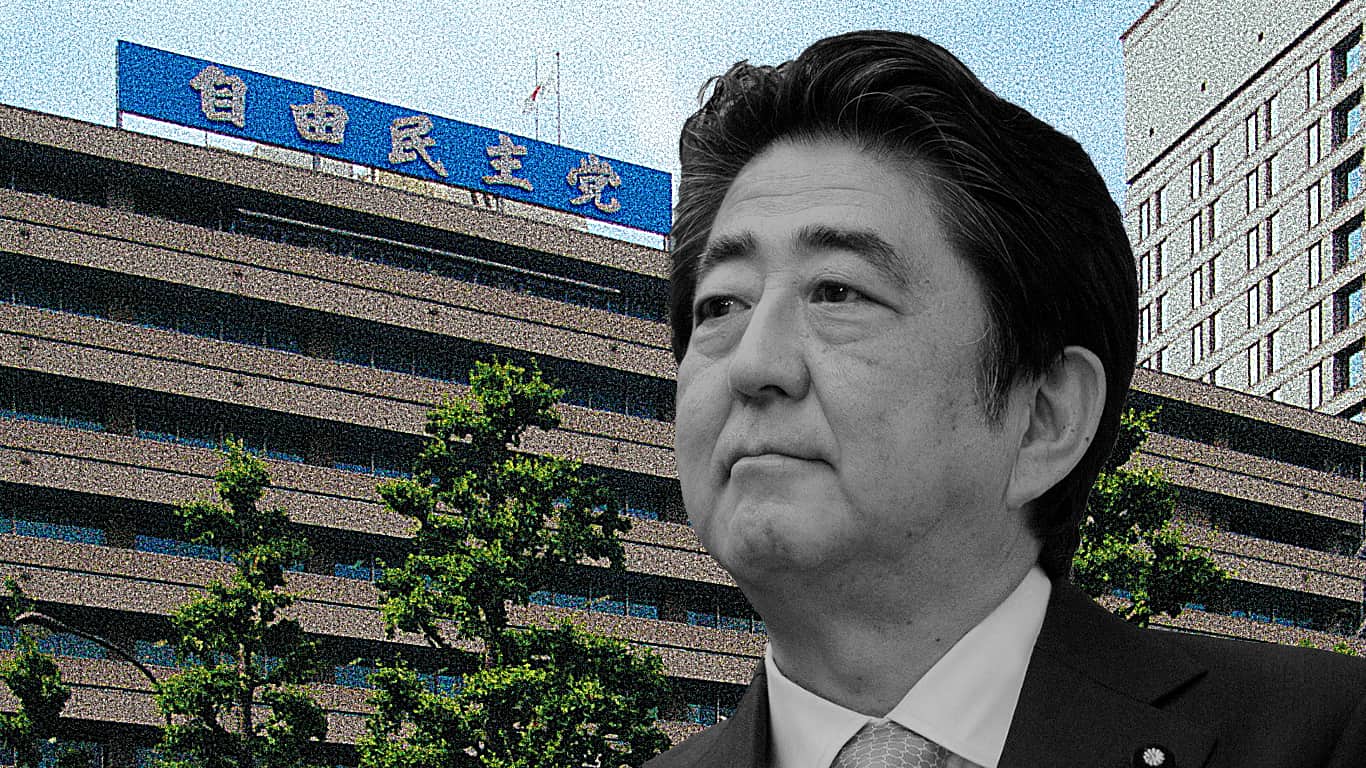 By highlighting his 2007 electoral loss and the “nightmare” DPJ government, Shinzo Abe is sending a warning to the LDP – unite behind me, or we all lose.

Shinzo Abe’s speech to the Liberal Democratic Party’s annual convention on February 10 felt at times like a slightly lackluster Greatest Hits compilation. With little fresh material to perform for the audience, Abe fell back on applause lines Japan has come to know off by heart in the past six-years-and-change: the time to change the post-war constitution has finally arrived; the issue of the Northern Territories must be resolved with Russia for the sake of future generations; he’s very sorry for a recent major scandal and he’s going to do his very best in the tough battle of an upcoming election. The North Korean abduction issue got a quick namecheck, and a hoary old classic of the early 2010s, “the DPJ administration [2009-2012] was like a nightmare,” was dusted down and wheeled out for the occasion.

Political leaders often reveal their true colors when they address the party faithful; away from the rarefied discourse of debates with opponents or attempts to win over undecided voters, the atmosphere of a supporters’ rally brings out a pugnacious nature and encourages them to speak more directly to their priorities and preferences. In Abe’s case, while his convention speech does tell us something about his priorities and motivations, it was a restrained and largely predictable affair — which also tells us something about his perception of the audience itself.

The LDP, especially its local chapters, are conflicted over Abe’s deteriorating public image and already have half an eye to the question of his succession, making this less a fired-up rallying call to a rapt gathering of devotees than an appeal to keep the faith and hold together ahead of the two major elections coming up in 2019.

That’s why the “nightmare” of the DPJ era got such prominent billing in the speech. Raising the specter of a government that fell many years ago, led by a party which no longer exists, is a tactic rightly mocked by most political commentators. An administration which has been in power as long as Abe’s has will be judged by voters on its merits. Context matters, though. The LDP members whom Abe was addressing really are haunted by the ghost of the DPJ’s time in government, not so much because of the DPJ’s actions while in power as the trauma it inflicted on the LDP — a thumping electoral loss, a few years in the wilderness of opposition with no direct access to the levers of power, and worst of all, the nagging fear that having happened once, this kind of handover of power could end up becoming Japan’s new normal.

For the LDP, that fear extends far beyond a normal political party’s worries about losing another election and being forced onto the opposition benches. Much of the LDP’s existence and influence — from the broad coalition of different interest groups that support it to the mixture of rival factions that gather under its banner — is tied to the expectation that the party will always be in power, or that its removal would be at worst a temporary aberration (as occurred in 1993, when opposition parties scraped together enough seats to form a coalition government, though the LDP remained the largest party in the Diet).

That expectation keeps the whole apparatus of Japan’s government firmly tied to the LDP. From civil servants and bureaucrats through to corporate leaders and regional governments, everyone knows that no matter how the party may be faring in the polls right now, they are ultimately the party of government and thus earning their favor or disapproval will determine your career advancement, funding opportunities or available contracts. This isn’t so much a threat as a certainty; it’s effective to a large degree because it leads, for example, to LDP supporters self-selecting into civil service roles, while those who oppose the party’s positions choose careers elsewhere.

If transitions of power became the new norm, the LDP’s ability to control the civil service and judiciary would be diminished

That’s why the electoral losses of 2007 (Upper House) and 2009 (Lower House) — the first times the LDP had ever outright lost elections to another party — were such a deep shock to the core of the party, and why raising the specter of that loss retains such rhetorical power for Abe when he addresses its convention. The chances of the LDP actually failing to gain a majority of seats in this year’s House of Councilors election are very small, but the historical precedent is ominous. Abe’s first term as Prime Minister ended shortly after he led the party to a defeat in the 2007 House of Councilors election, a personal humiliation which the Prime Minister nonetheless chose to remind LDP members about at the convention. The consequences of losing elections weigh heavily on the minds of the LDP’s membership. If transitions of power became the new norm in Japanese politics, it would have a huge impact on the LDP’s ability to control everything from the civil service to the judiciary to the nation’s media and corporate interests. Indeed, many of the controversial aspects of Abe’s post-2012 administration can be understood as a backlash driven by precisely that fear — from largely clumsy and ineffective attempts to restrict press freedom through to the creation of the Cabinet Bureau of Personnel Affairs, which gave the Prime Minister’s office direct control over the appointments of hundreds of top bureaucrats.

When Abe speaks of the “nightmare-like” nature of the DPJ administration, then, he’s certainly giving a nod to some of the firmly-held biases of the LDP’s base (who remain especially animated over Naoto Kan’s handling of the Fukushima nuclear disaster, though entirely relaxed over the LDP’s regulation of power plant operator TEPCO in the decades leading up to the disaster). But there’s also an implicit threat to factions and local LDP chapters who have seemed increasingly unwilling to back the Prime Minister. The opposition remains well short of the kind of polling numbers that would suggest a breakthrough, but it is more unified than at any point since 2012 — and could be positioned to make gains if the LDP enters the electoral season looking fragmented and disunited. In willingly conjuring up the memory of the DPJ’s victories and his own 2007 electoral loss, Abe is telling his party “back me, or we could all go down together.”

Unfortunately for Abe, the immediate signs are that this messaging isn’t working. The Prime Minister’s rolling out of his other Greatest Hits — constitutional reform, diplomacy with Russia, and so on — was meant to reassure the LDP base that he’s still in their corner and pushing for their policy priorities, but none of these messages seemed to land firmly. On constitutional reform, Abe’s line that the reform is necessary to clear up the constitutional status of the Self-Defence Forces has been rejected both within and without his party, with perennial Abe rival Shigeru Ishiba openly questioning the validity and honesty of the Prime Minister’s claims. Local LDP chapters also seem deeply worried about the idea of fighting an election on constitutional reform, which is arguably Abe’s only way to earn a bigger mandate for the amendments he seeks, but is also a topic that’s unpopular with the public and plays strongly for the opposition CDPJ. On diplomatic efforts to secure the return of the Northern Territories from Russia, Abe’s proposals have been watered down to the extent that failure to achieve the LDP’s preferred outcomes almost seems priced into his position. As for Abenomics, once the Prime Minister’s signature policy, the ongoing scandal over manipulated wage-growth figures has made even the mention of economic achievements a minefield for the LDP.

History doesn’t repeat itself, but it often rhymes (as Mark Twain probably didn’t say). Abe’s humiliating loss in the 2007 House of Councilors election is vanishingly unlikely to be mirrored in 2019, but the risk of seeing the opposition make major gains are vastly enhanced if the LDP cannot present a united face to the public. It’s not public fatigue with Abe himself that’s really the issue — his personal polling was weak at the 2017 General Election but didn’t particularly hurt the LDP’s results — so much as the possibility for internal bickering and fragmentation to make the Prime Minister seem like a lame duck, even as the opposition holds together coherently for the first time in a decade. Abe’s political instincts in this matter may be self-interested, but they’re also correct: an LDP divided against itself could well find itself deeply diminished after the year’s elections.