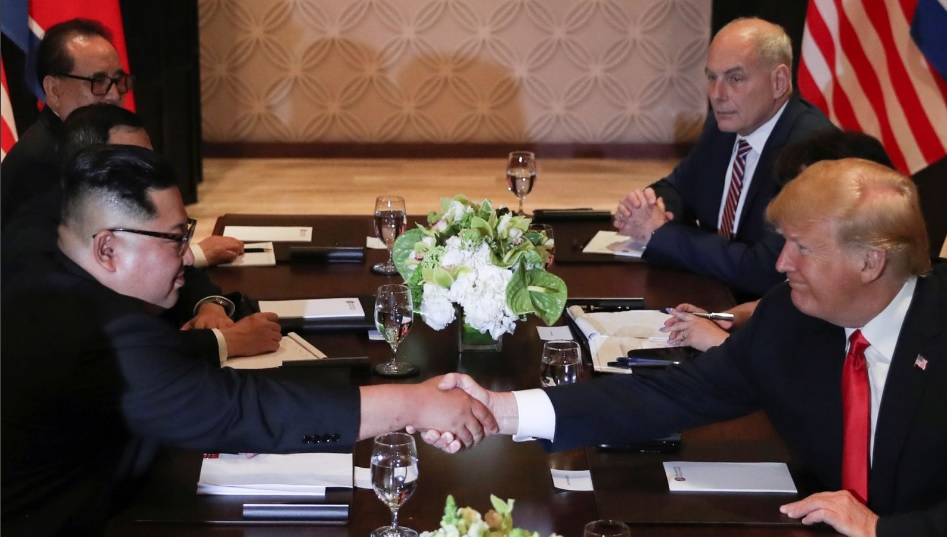 The second Trump-Kim summit is an event of crucial importance not only for the United States and North Korea, but also for many other countries in the Asia-Pacific region, including Japan. However, Tokyo is worried about being left on the sidelines, and that has so far been the case. China, South Korea, and the United States have all held summits with North Korea – while Japan has been forced to rely on the United States to defend its interests: Japanese abductees, and disarmament.

Foreign Minister Taro Kono and U.S. Secretary of State Mike Pompeo spoke on the phone on February 21, ahead of the second summit set to take place in Hanoi on February 27 and 28. Yet despite the apparent coordination between Tokyo and Washington, for the time being Japan remains an observer. In fact, Abe has been left on the sidelines despite his clear hope to play a more active role and hold his own summit. Japan-South Korea relations have also deteriorated since the first summit, making it even more difficult for Japan to get a stage role in dealing with North Korea passing through Seoul.

Tokyo was seeking to hold talks with North Korea even before the first Trump-Kim summit which took place on June 12, 2018. Following the first U.S.-DPRK summit, Japan reaffirmed its will to hold leadership-level talks with North Korea at “the earliest opportunity.” Abe personally confirmed that he would “never miss whatever chance that will be available.” Since then, Japan has been making “every effort” to contact North Korea through diplomatic channels, with Abe  insisting on the possibility of holding his own summit with Kim. The Japanese Prime Minister has even toned down rhetoric vis-a-vis North Korea compared to last year but this has so far not helped advance any negotiation that might help serve Japan’s interests.

Japan has two main goals in regard to North Korea. First, it seeks to resolve the abductions issue caused by North Korea’s kidnapping of an indefinite number of Japanese citizens. However, despite Abe stating that this issue is one of “highest priority” for his administration, security issues are the most pressing matter for Japan preceding the second summit between Trump and Kim.

In particular, talk of a possible withdrawal of U.S. troops from South Korea concerns the Abe administration. Despite the fact that it is highly unlikely that such a scenario would present itself (Trump even reassured reporters that he is not considering such move “at this moment”), Trump is unpredictable and it would not be unusual for him to pull a surprise stunt, even if it were just intended as a rhetorical flourish.  Furthermore, given Trump’s stated desire to “save some money”, coupled with the unpredictability of talks with Kim, there remains a risk of troop withdrawal which may have uncertain consequences for the Korean peninsula – and Japan’s security.

Disarmament is a much more concrete issue for Tokyo. While instability in the Korean peninsula would be potentially problematic for Japan, the nuclear and missile threats are a much more real and direct menace. Therefore, a case where sanctions on North Korea are lifted without having confirmed substantial progress on disarmament would be the worst case scenario for Tokyo.

Japan’s issues go beyond the risks associated with incomplete denuclearization. Tokyo is also worried about short and intermediate range missiles, as opposed to the United States which is not threatened by such weapons.

Therefore, while it is not guaranteed that the United States will defend Japan’s interests as Tokyo remains on the sidelines during these summits, it is even more unlikely that Trump would make efforts to get concessions on weapons that do not threaten the United States.

Donald Trump had said that “talking is not the answer” before he had any summit with Kim. Yet he ended up talking, and he is about to do it again. Japan is waiting for answers from its ally and carefully watching how developments unfold. Tokyo still hopes to someday hold its own summit, but for the moment is Trump the one going on stage and having another one-to-one meeting with North Korea’s leader. And while Trump is in “no rush” to denuclearize Korea, Japanese officials are voicing their concerns.