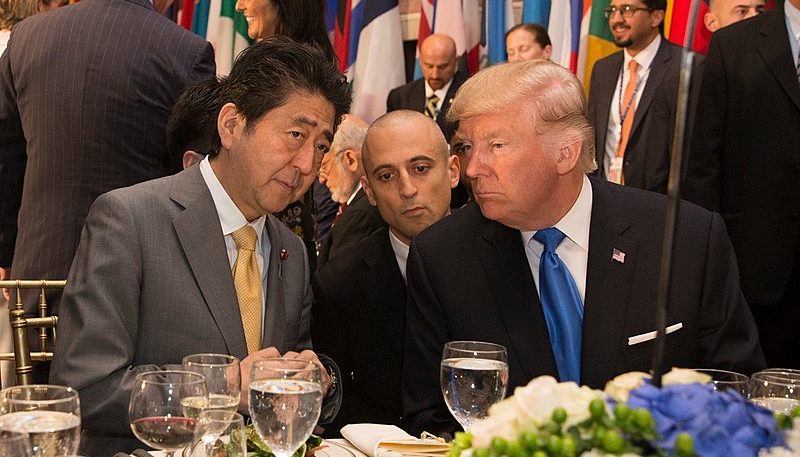 As Donald Trump officially visits Emperor Naruhito, calls for Japan to do a quick trade deal with the U.S. have intensified – but Tokyo should resist.

The last time Japan began a new era, then-President George H.W. Bush had the manners to keep trade issues on the back-burner on a ceremonial visit to Japan. Over 25 years later, as the Reiwa Era begins, President Donald Trump will visit Tokyo as Emperor Naruhito’s first foreign head of state visitor. He arrives with unfinished business around reducing the U.S. trade deficit with Japan – and with far less concern for dignity and ceremony than his predecessors. Even commentators usually sympathetic with Japan have called for Tokyo to accede to a quick deal to avoid Trump ruining the party. But making substantial concessions is not the Abe government’s best course of action.

This time the scope for talks includes trade in goods, plus a few services including the digital economy. The Trump administration has its sights set on a particular goal: reducing Japan’s $67.6 billion trade surplus with the United States, nearly 80 percent of which is automotive trade. Though the United States has likely postponed the possibility of tariffs on auto imports for the coming weeks, the Trump administration continues to hope for commitments to open up the Japanese automotive market through the removal of non-tariff trade barriers. Additionally, it wants tariffs lowered on agricultural exports to Japan, as U.S. farmers are feeling the pinch from higher tariffs relative to European Union and Comprehensive and Progressive Agreement for the Trans-Pacific Partnership (CPTPP) member states whose trade deals with Japan recently came into force.

Japan’s primary objective is to continue to avoid auto tariffs, which would cause severe economic damage and could even open a rift in the security alliance. It is also fundamentally opposed to voluntary quotas on auto exports and foreign exchange provisions, as managed trade would violate the rules-based trade Japan seeks to uphold. If Japan is to lower agricultural tariffs for U.S. products, then it hopes to gain lower tariffs on its auto exports to America in return, as agreed in the Trans-Pacific Partnership (TPP), which Trump withdrew from within days of becoming president.

Washington insiders and commentators have called for Tokyo to reach a speedy agreement. The thinking goes that to avert the damage that would result from auto tariffs, Japan is better off hastily compromising with the United States. Matthew Goodman with the Center for Strategic and International Studies (CSIS) and the Brookings Institution’s Mireya Solis have both argued for Japan to sign a limited deal to avoid drawn-out talks and set the two countries on a more constructive agenda to shape Asia’s economic architecture, particularly rule-making for the digital economy. Going further, Michael Auslin at the Hoover Institution has suggested that the United States ought to form a trilateral deal with the United Kingdom and Japan to enclose Eurasia.

However, Japan is better off pushing the buck back as much as it can and offering as few concessions as possible, for several reasons.

First, this would let China take center stage. On the one hand, if China finds an impasse, Japan will have a better sense of the way forward. On the other, if they don’t – as seems highly likely given escalation of the trade war with harsher tariffs – the spotlight will be off Japan. A U.S.-led economic war on two fronts in East Asia makes little sense. Even if good sense doesn’t speak to the Trump administration, Japan can bank on its stretched bandwidth and tendency to shift to more important foreign policy priorities.

Second, it is wishful thinking to imagine that by offering concessions on agriculture and automobiles, the Trump administration will be willing to engage in the sort of multilateral regional rule-making that Tokyo hopes for. Trilateral cooperation – including Europe – on market distorting practices and the free and open Indo-Pacific are taking place separately to bilateral trade talks. These are unlikely to be prioritized by the Trump administration if Japan kowtows and would likely continue even if Japan refuses to budge.

Third, Japan is deploying a conscious strategy to build leverage in negotiations and highlight the importance of Japan to the U.S. economy. It is presenting “wins” to Trump that he can parade to a domestic audience, proving to his supporters that he has fought for his campaign promise to renegotiate America’s trade deals, with minimal damage to its own interests. Japan has reduced oil imports from Iran and banned government procurement of Huawei equipment. Abe has drawn attention to increased purchases of U.S.-made military equipment and has room to pass off purchases of U.S. Liquefied Natural Gas (LNG) as an effort to reduce the trade deficit. Japan Inc. has invested in pro-Trump Republican states. This approach showed signs of working when at a recent rally, Trump touted a victory in boosting Japanese automotive investment into the United States by $40 billion.

Finally, if a deal is made, the Trump administration is likely to ask for more in a comprehensive trade deal that would reel in sticky issues of currency discipline, pharmaceutical pricing, and “poison pill” clauses. If these U.S.-Mexico-Canada Agreement (NAFTA 2.0)-style clauses are agreed in a bilateral deal, a U.S. return to the TPP would consequently be more difficult. Japan would also have to answer to CPTPP members and the European Union if it were to offer agricultural concessions to merely avoid auto tariffs – not a real concession from the United States, considering the shaky foundation to the Trump administration’s case for the tariffs, namely the claim that auto imports from an ally are a threat to national security. Compromising could undermine Japan’s position as a defender of multilateral free trade, rather than consolidate it.

Trump may well be able to contain himself as Emperor Naruhito’s inaugural state visitor but he will be back only weeks later for the G20 summit in Osaka. If he feels not enough has been done, the July summit could be the propitious moment to turn up the heat on Tokyo. Even under this pressure, Japan should continue to present to Trump superficial, tweetable “wins” and create an impression that a good deal has been reached or progress is being made – without vindicating Trump’s bullying approach by offering anything too substantial.

Harry Dempsey is an analyst for Anniversaries, Inc., a new U.S.-Japan relations think tank. He has worked as a research associate at the Asia Pacific Initiative (API) and as a researcher at Shinko Research (part of the Kobe Steel group). He has additional experience at the British Embassy Tokyo and London Research International. He was on the JET Program in 2014-15. He holds a BA in philosophy from Cambridge University.