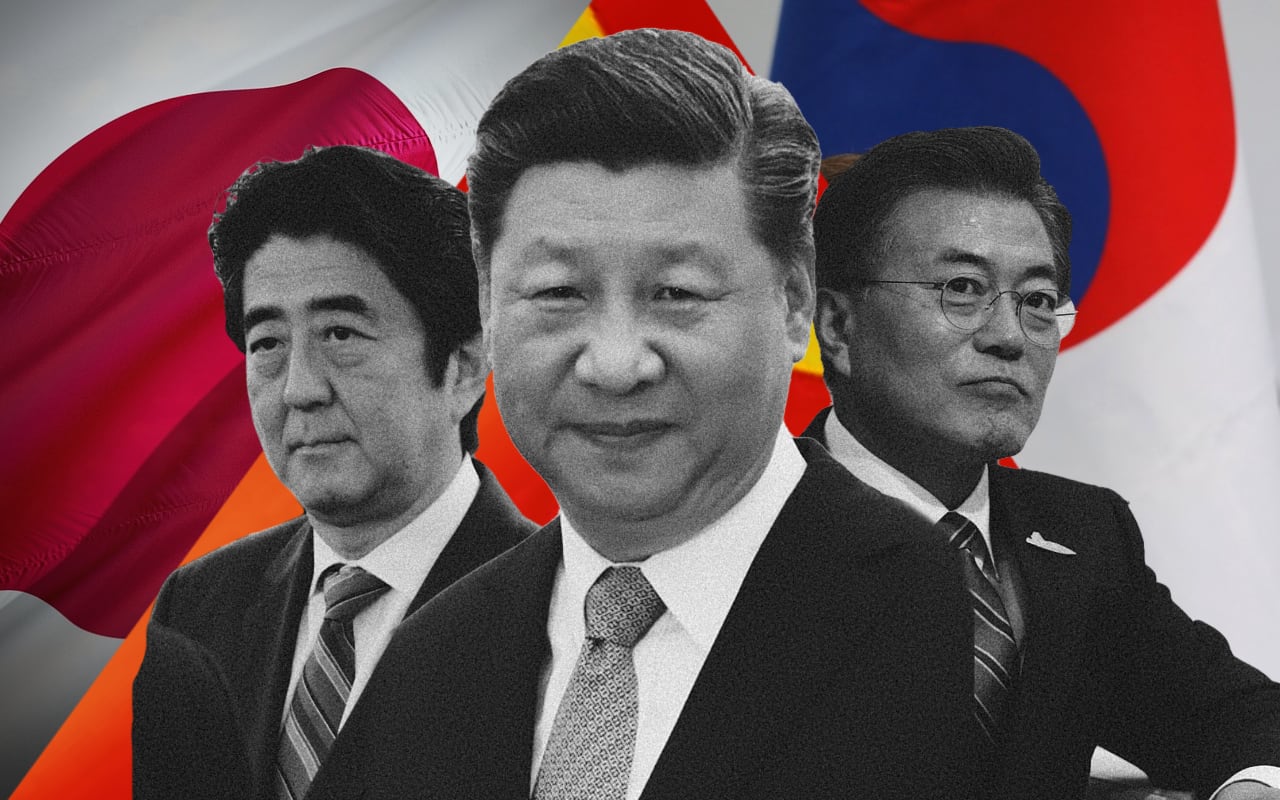 The chill in relations between Japan and South Korea may benefit China strategically – but economic concerns mean Beijing is keen for a resolution.

Welcome to the September 2019 installment of “Sino-Japanese Review”, a monthly column that provides a running commentary on the evolution of the important relationship between China and Japan, and helps to put current events in perspective. Previous installments may be found here.

The tensions between Japan and South Korea are showing no sign of easing, and the United States has been reduced to watch helplessly as its two allies engage in a spiral of measures and counter-measures that has expanded from trade to the security sphere. China would seem to be the big winner of this situation, but it also has good reasons to want its two neighbors to step back from the brink.

There is no doubt that the current situation benefits China in some ways. The most obvious are geopolitical, as it has long been concerned by the possibility of South Korea and Japan not only strengthening their alliance with the United States but also becoming closer security partners themselves. This would only heighten its concerns about U.S.-led encirclement. Such a scenario looks much less likely in the current situation, especially after South Korea’s decision to pull out of the very modest intelligence sharing agreement it had concluded with Japan. Any weakening of the U.S.-led alliance system in East Asia will be welcome in Beijing, and in this sense the Japan-South Korea dispute has been a net positive.

Economically as well, China could eventually gain from the trade tensions between its two neighbors. It is currently making great efforts to climb up the manufacturing value chain both to avoid the middle-income trap and to reduce its dependence on the US in the context of the current trade war. By doing so, it is entering into direct competition with Japan and South Korea in a range of specialized sectors, chief among them the manufacture of semiconductors. Any long-term disruption to the production capacity of the two countries could be an opening for Chinese firms to gain market share. This is however an uncertain prospect for a still relatively distant future, as China’s semiconductor technologies are still far from rivaling those of established producers.

In an age of economic interconnectedness, China is exposed to trade disruptions in its neighborhood

In the more immediate term, the Japan-South Korea dispute holds negative economic consequences for China. Several major Korean semiconductor makers manufacture their products in the country with local partners, to which they re-export some crucial chemicals imported from Japan. This supply route is now threatened and few alternatives are immediately available. The impact on major Chinese tech companies, including Huawei, could be quite damaging since semiconductors find their way into so many essential products, from smartphones to computers and televisions. This underlines how exposed China is to trade disruptions in its neighborhood in an age of economic interconnectedness.

Such difficulties come at the worst time possible, with the trade war with the United States already taking a toll. China was trying to diversify its trading partners by accelerating negotiations of inter-Asian free trade agreements, including a long-mooted trilateral agreement with Japan and South Korea, which was proposed in 2002 and has been in negotiation since 2012. It is also a key agenda item for the Japan-China-ROK trilateral summit and foreign ministers meeting that was to be held annually since 2008. Almost since its inception, though, relations between two of the three countries have been tense, hindering progress. Between 2010 and 2014, China and Japan quarreled over the Senkaku/Diaoyu dispute – no summit was held in 2013 and 2014 as a result – while in the years after, it was China and South Korea’s turn to bicker over the deployment of the THAAD missile defense system. Now it is Japan and South Korea’s turn to be at each other’s throats.

At the trilateral foreign ministers meeting held in Beijing on August 21, then, China played the role of the reasonable party urging its two neighbors to reconcile, and even offered to mediate between them. It probably knew that Japan would reject the offer out of hand, but this still allowed it to pose as a responsible great power, one that is “bringing Asia together” and advocating “putting aside differences and seeking common ground”. This fits well with its ambition to be recognized as the overseer of international order in East Asia. Yet China also has clear economic interests in a return to stable ties between the three states and its call to resolve the Japan-South Korea trade dispute was most likely heartfelt. It might welcome security tensions between the two U.S. allies, but if they are accompanied by disruptions in the regional supply chain and a breakdown of negotiations for a trilateral FTA, the price to pay is high indeed.