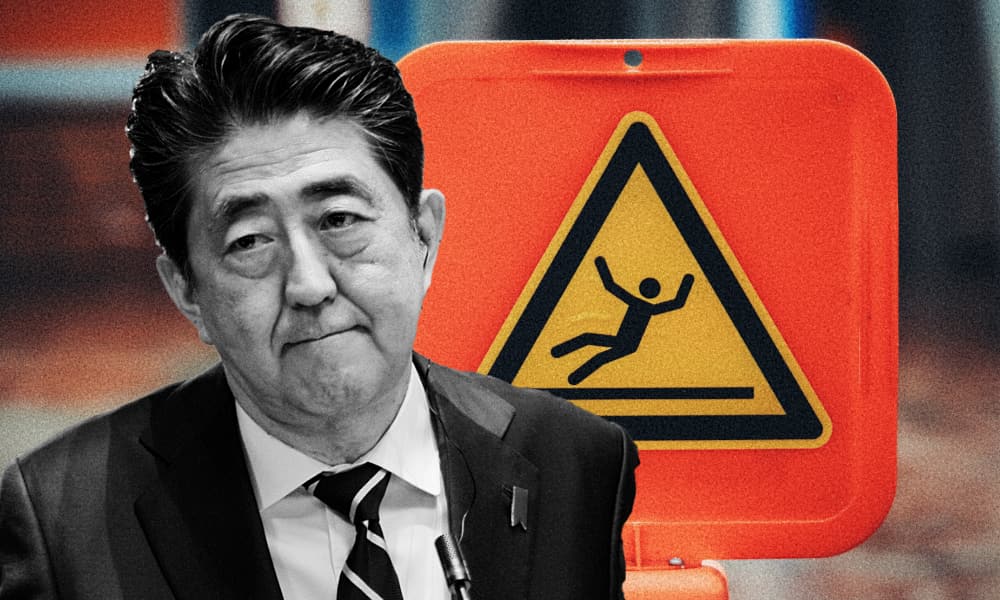 Public discontent has driven support for Abe’s cabinet below 30% – but in the absence of a challenger, the Prime Minister’s position is still secure.

Prime Minister Abe Shinzo’s press conference announcing the end of the country’s COVID-19 state of emergency on May 25 had, at points, the air of a victory speech. Touting the effectiveness of what he termed the “Japan model” – and touching upon the notion of Japanese exceptionalism to which his rhetoric so often returns – Abe announced that the virus is all but under control and suggested that the country’s success meant it should now play a leading role in global infectious disease measures. The lengthy briefing primarily consisted of a sober, realistic assessment of future risks and the need for lifestyle change to keep the virus under control, but never far in the background was an unspoken appeal for his government to be given credit for suppressing the virus with by far the lowest death toll among the G7 nations.

Abe will likely need to make that appeal loudly and often, because far from giving him credit, the Japanese public has been unrestrained in its judgement. Even as the case numbers have fallen off, hospitals have reported reduced pressure on their services and demographic data has disproven fears of a hidden spike in excess mortality, the public’s support for Abe’s cabinet has dropped to its lowest level in several years. Asahi Shimbun polls conducted on May 23 and 24 showed the support rate for the cabinet dropping to 29 percent, with non-support at 52 percent; a snap Mainichi Shimbun poll on May 23 was even more dramatic, reporting a support rate of only 27 percent and a non-support rate of 64 percent, a decline of almost 17 points in support in just six weeks. These polls remain outliers, but not by a huge degree – recent polls by other media bodies like NHK and the Yomiuri Shimbun also show public opinion turning hard against Abe’s government.

The support number for the cabinet dropping below 30 percent is conventionally seen as a “danger zone” for a prime minister. This is not so much because he faces losing an election at that level of support, but because it raises the possibility that his party, the LDP, begins to think that it would fare better under different leadership and thus opens the door to internal challenges. This is especially the case when a weak cabinet support rate is matched with a decline in party support or vote intention for the LDP, as is the case in this instance; the Mainichi poll puts LDP support at 25 percent, down nine points in six weeks, with the Asahi poll concurring at 26 percent. Abe has been in this zone before, though, most notably in 2017 when the “MoriKake” scandals around Moritomo Gakuen and Kake Gakuen took their toll. After decisively winning a snap election in October 2017, ably assisted by the dramatic disintegration of the main opposition party only weeks before the vote, Abe’s poll numbers recovered – to the point where he went on to win an historic third term as LDP president in an internal party vote in September 2018.

Not only does the public judge his COVID response critically, but a scandal surrounding an ally of the Prime Minister has compounded the damage

This time around, things might not play out so smoothly for the embattled Prime Minister. The reasons for the precipitous decline in his support are interconnected. First and foremost, the public doesn’t appear to highly rate the government’s role in the coronavirus response, especially from a standpoint of economic support to affected businesses and individuals. This factor has in turn greatly exacerbated the response to an otherwise workaday scandal over the government’s plan to raise the retirement age for public prosecutors, which critics claimed was a move designed to allow an ally of the Prime Minister, Kurokawa Hiromu, to take the powerful prosecutor general position. The government set the legislation aside until the fall in the face of strong public opposition. Then Kurokawa was reported to have played mah-jong and gambled for money with newspaper reporters during the COVID-19 state of emergency, forcing him to resign. Such a scandal would usually have a relatively minor, or at least short-lived, impact on the government’s polling – but the sense that Abe was expending time and effort on this issue rather than focusing his government’s efforts on the COVID-19 crisis appears to have created a spiral of negativity in public opinion.

The fact that this “danger zone” is more concerned with internal challenges to the LDP leadership than to external challenges from opposition parties, however, gives Abe a significant buffer zone before the polling numbers really put his position at risk. The polls continue to make glum reading for Japan’s opposition parties; the CDPJ has made minimal poll gains even as the LDP’s numbers have declined, with the vast majority of the LDP’s lost support instead flowing into the “I support no party” column. In the Asahi poll’s breakdown of reasons for supporting or not supporting the cabinet, only 8 percent of those who don’t support the cabinet say that they think there’s a better alternative. The only opposition party making any headway in the polls is the Osaka-based Nippon Ishin no Kai, which remains largely a regional niche party but has been bumped a few points by the well-received handling of the COVID-19 crisis in Osaka by Ishin governor Yoshimura Hirofumi.

Abe may once again be in the “danger zone”, then, but there’s no actual “danger” unless an internal challenge is mounted to his leadership. On this front, his position seems secure thus far. The people most likely to follow Abe as prime minister, such as former foreign minister Kishida Fumio, aren’t likely to mount a challenge – they see their path to office as one of succession with the blessing of Abe’s large and influential party faction, and there’s evidence of Kishida in particular moving to cement his position as the natural successor to the Prime Minister rather than as an internal rival. The wildcard is the possibility that LDP support numbers remain so low for a protracted period that lawmakers and local parties in more marginal seats start to get nervous and demand a change of leadership. Though we are still a long way from that situation, if it does occur it may present an opportunity to a figure like perennial leadership challenger Ishiba Shigeru, who is popular with the LDP’s grassroots but far less so with the parliamentary party and seems far more likely to be able to seize the top job in a party crisis than in an election held under more regular circumstances.

Abe might be in the “danger zone”, but there’s no actual danger unless an internal challenge is mounted against his leadership

The big question lurking in the background, though, is whether anyone – even Ishiba – would actually want to take Abe’s place as Japan’s prime minister in the next year or so, ahead of the scheduled end of his term in 2021. The reality is that overcoming the first wave of the virus is likely only the beginning of what’s going to be a very rough road, politically speaking. The prime minister would face an economic crisis deeper, and with more direct impact on ordinary workers and families, than anything Japan has seen in a generation – an especially tough storm for the LDP to weather, given that their reputation is built on economic competence and protecting the nation’s livelihoods. There’s a reasonable chance they’ll find themselves having to tell the nation that the Olympics have been cancelled outright, and at a staggering cost. And when a second wave of the virus comes, as most experts seem to think is inevitable – though they differ on how serious it will be – Abe’s statements on the “Japanese model” will undoubtedly be labelled vainglorious and thrown back in his face in a similar manner to George W. Bush’s infamous “mission accomplished” speech on the Iraq War. Any astute politician can see the annus horribilis bearing down on Japan’s leadership; most, under these circumstances, would demur, happy to let Abe soak up that political damage so that his replacement can appear as a breath of fresh air when the situation begins to improve down the line.

This may be the aspect of Abe’s stability in the face of tough polling numbers that the Prime Minister finds least reassuring; after securing his place in history as the country’s longest-serving leader, he likely could not have imagined spending his final year in office as a punching bag for an economically suffering public, opposition rivals, and even opportunists in his own party. Yet the other option available to Abe – throwing all of these calculations up in the air by resigning and forcing the party to pick a new leader – likely remains even more unpalatable, simply because of the inevitable comparisons it would invite with his previous resignation from the office in 2007.

This makes it more than likely that Abe will tough out the year – and despite harsh circumstances, he will hold out hope that his polling may yet recover, allowing him to leave his tenure with dignity. So, Abe won’t resign, an internal party challenge seems deeply unlikely, and the opposition, fragmented and of questionable competence, isn’t seen as a realistic government-in-waiting by voters. Failing the unlikely eventuality of an outright revolt from the LDP’s grassroots, Abe’s “danger zone” may end up being surprisingly safe.