“Hit Me Anyone One More Time” is the latest comedy film by director and dramatist Mitani Koki. Although a parody centered around a fictional prime minister of Japan, it lacks the cynicism one might expect when portraying the worst prime minister in Japan’s postwar history. Instead, Mitani’s message is a reminder of the high-minded ideals that are supposed to draw people into politics in the first place.

When the prime minister protagonist Kuroda Keisuke loses his memory after being hit on the head by rock thrown by a disgruntled citizen, his aides try to hide it from both the media and the rest of the cabinet while Kuroda is forced to experience the vitriol and ridicule that he doesn’t remember deserving.

We only see one small glimpse of the old Kuroda Keisuke, a hardened LDP politician shouting crudely during Diet question time reminiscent of a certain contemporary top cabinet member. It’s not hard to see Kuroda’s (former) demeanor as an amalgam of the most colorful past and present LDP prime ministers. While Prime Minister Abe Shinzo might not be trying to build a lavish Diet building complete with a super sento spa, Kuroda’s other transgressions namely—raising the consumption tax, parliamentary ramrodding, evading Diet questioning, free trade agreements—are more than familiar to anyone with even just a passive awareness of the political day to day.

It’s not hard to see Kuroda’s (former) demeanor as an amalgam of the most colorful past and present LDP prime ministers.

With past memories gone and still in power, Kuroda finds his bearings relatively quickly and uses this opportunity to refashion himself. Where one may expect more of a “Weekend At Bernie’s”-esque series of bumbling close calls or the third-act test to see if our intrepid amnesiac has really learned anything through his travails, Mitani’s film allows Kuroda’s naivety to be bolstered by his rising confidence and the hard work of his well-intentioned aides. This is not a story about the temptations of power but a fantasy of what a good person could do in power and the humor of bumping up against what prevents common sense policy from materializing.

As Kuroda regains his memory and old sense of virtue, it also brings him much closer to the people he is now emboldened to serve again. A pivotal scene shows a group of farmers finding their way to the prime minister begging him to try one of their delicious cherries (a point of contention in the upcoming trade negotiations with the United States). He’s inclined to indulge them, pushing past the advisor who is telling him off. This single scene works to set up how the PM comes to view the burden of public service since there are very few other moments in which Kuroda even interacts with anyone outside of the cabinet or the media.

This slapstick style of Japanese satire can feel a little outdated when it comes to the film’s female characters. In a satire where all characters begin as compromised it is understandable that the women are, too. It’s in their particular ways of being so that will cause many viewers to sigh defeatedly as when an odd uncle makes some callous but not wholly unexpected remarks at Christmas dinner. Women get the short end of the stick with a secretary who invites her own harassment, an affair with an opposition party leader desperate to build a coalition, and a cheating wife whose internal motivations remain otherwise unquestioned.

Yet it’s also true that sex scandals are a central characteristic of Japanese politics, and here it serves as the redemptive arc of how enamored the media is with reporting on the romantic trysts of the famous. In any case, everyone gets a chance to redeem themselves, from the reporter who first broke the story of the infidelity, to the construction magnate that Kuroda was funneling money for his personal project. All it takes for politics to be restored is for the cynicism and pettiness to cloud the inherent goodness that brought each of the main actors of the plot to the PM Office in the first place, before corruption set in and led them astray.

In an interview in February earlier this year Hara Kazuo (The Emperor’s Naked Army Marches On) described the current administration as a comedy. Even as the country lurched towards a so-far narrowly avoided tragedy in the months after, that comment has not lost its force. Rather, it has become more farcical. In that way, and for all of the simplicity with which he describes politics, Mitani’s message works because it resonates with the current moment: what if Abe were to see himself through the lens of a punchy comedy? Would he maybe see the good he could do if he were to just leave the politics behind him? There is purchase in that idea, and it might not be a better moment than now to indulge in it. 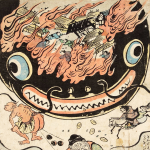 Romeo Marcantuoni is a research student at the Graduate School of Asia-Pacific Studies at Waseda University. He earned his MA and BA in Japanese Studies at KU Leuven, Belgium. His research interests are in democracy, civil society, and Japanese culture