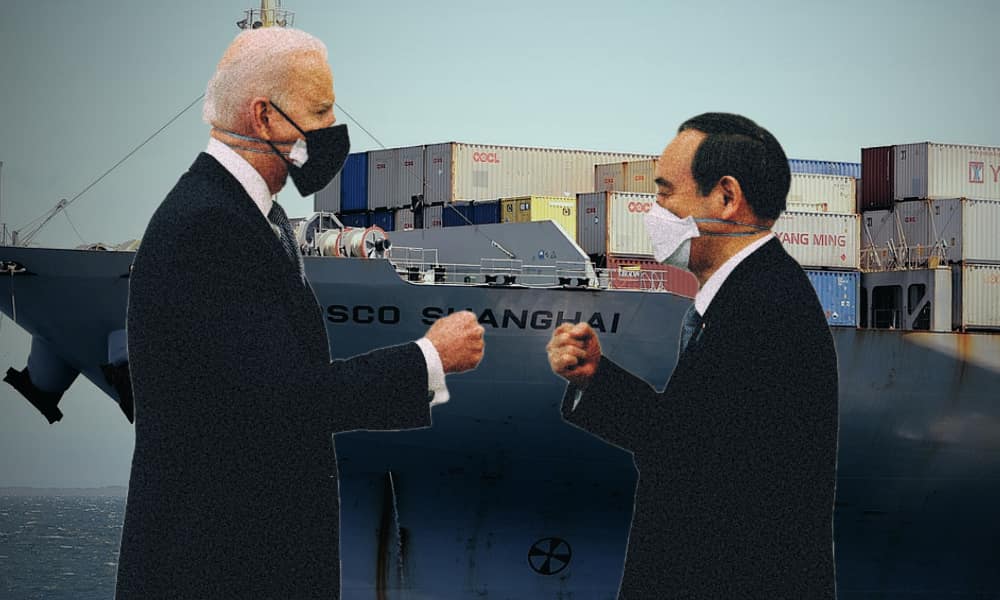 President Biden and Prime Minister Suga have high ambitions for U.S.-Japan economic cooperation – but domestic politics is a limiting factor.

Deepening economic relationships is essential for deepening partnerships, so a Joint Statement heavy on economic cooperation was not a surprising outcome of Japanese Prime Minister Suga Yoshihide’s meeting with U.S. President Joe Biden in Washington on April 16. While goals such as WTO reform, inclusive growth, strengthening intellectual property rules, and combating unfair trade practices would be anodyne language in most cases, in this instance they marked a practical difference between Biden’s administration and that of his predecessor – one that is also in line with Japan’s objectives for the international economy.

Working towards such high-minded goals, which are typical of Joint Statements, will give each leader plenty to occupy their time. Political pressures will tend towards protectionism while commercial pressures will tend towards further integration. The United States is behind Japan (and Asia) on the latter and hamstrung by the former – while the region may be relieved to see a U.S. president who is more closely aligned with their ambitions, practical demands may put a low ceiling on how much Asian governments can reasonably expect.

The weakening of the World Trade Organization and disrupted trade patterns that have resulted from the China-U.S. trade war and dislocations from COVID have significantly changed the context for Japan-U.S. trade cooperation. That’s even leaving aside the fact that the United States has largely been a bystander as the Indo-Pacific region has concluded large comprehensive agreements like CPTPP and RCEP, while Japan itself has completed its own agreements with the European Union and United Kingdom.

On the question of China, too, divergent approaches have put some distance between the partners; while the United States engaged in a trade war, Japan engaged with China through the RCEP discussions as well as through high-level meetings on non-sensitive issues and facilitating visits by business leaders. Yet both the deepening security challenge from China and the continuing intensification of U.S. competition with China mean that Japan will more finely balance the conflicting needs of its domestic stakeholders and its international cooperation with the United States.

One way to place a thumb on the scales in that calculation would be to further enhance the economic relationship between Japan, the U.S. and other Asian partners – but any moves in that direction may be severely limited by U.S. political realities. The Biden administration has said it will pursue “worker oriented” trade policies that will focus on increasing U.S. manufacturing and exports and repatriating supply chains. While the practical details of what this will look like in practice are still unknown (a safe bet is that Biden will prefer industrial policy over tariffs, in another break with the Trump administration’s preferences), there is almost no U.S. political constituency to advance trade liberalization at the scale of an agreement like TPP. Political and diplomatic capital toward that end should be used sparingly, if at all. Though U.S. producers have already noticed challenges with market access following CPTPP’s enactment, it remains an open question whether this could be sufficiently meaningful to create the political space to allow the agreement’s ratification through the U.S. Congress. Biden’s administration will need to try to thread a very thin needle with organized labor – a traditionally Democratic-aligned group that is deeply skeptical of trade and appreciated Trump’s goal of bringing manufacturing back to the United States.

Instead, the Biden administration has stated that it expects to avoid trade agreements and will rely instead on stronger enforcement of existing agreements and executive orders (particularly for provisions relevant to national security). Part of this is simply a product of reading the moment politically – Biden has already committed significant capital to economic recovery, and trade policy remains contentious, likely setting up a fight in Congress that the new administration doesn’t need right now.

Both Democrats and Republicans are divided to different degrees on economic issues between idealists and pragmatists, and it’s unclear whether a coalition could be assembled, either across parties or within, that could provide the support for CPTPP or similar legislation. It may not be impossible, but it will take some creativity and initiative from the Biden administration’s legislative affairs office. U.S. Trade Representative Katherine Tai’s experience will be essential in this regard: her background is in managing trade policy in Congress and she was specifically responsible for building bipartisan consensus to get the U.S.-Mexico-Canada Agreement (USMCA, Trump’s renegotiation of NAFTA) through Congress.

Short of that, moving the ball forward on digital commerce or trade facilitation is the next best thing – anything to show that the U.S. is committed to the economic future of East Asia. Agreements could instead focus on specific sectors (digital trade, telecommunications, agriculture, pharmaceuticals, and so on) which may not carry the same rule-making weight of a regional agreement like CPTPP or RCEP but can incrementally build towards that effect. This is a step that former deputy U.S. Trade Representative Wendy Cutler said could build goodwill among negotiating partners and sidestep some of the political sensitivities that may arise during negotiation of a more comprehensive agreement. The announcement by the Office of the U.S. Trade Representative (USTR) that it would seek to remove Japanese tariffs on U.S. exports to the country may be a useful starting point for broader discussions on market access, even if these may yet fall short of a full trade agreement.

The United States has some catching up to do. Even though the region has been busy working on its own agreements and rules, and even though the promise of renewed U.S. interest can lead countries to adjust their planning accordingly, accommodation for the United States will not be unconditional. All parties will be looking to see what the United States has to offer. For their parts, Japan and the United States are prioritizing supply chain resiliency and the digital economy, both of which featured prominently in the meeting between Suga and Biden. The Joint Statement resulting from the April 16 meeting mentioned that Japan had committed $2 billion and the United States $2.5 billion to strengthen digital competitiveness in 5G and other initiatives, emphasizing the importance of relying on “trustworthy vendors” in an unsubtle reference to concerns that technologies manufactured in China may serve espionage purposes.

The setting of rules and standards for digital commerce will be essential – and high-stakes. It’s not much of an exaggeration to say that the rules governing digital commerce will be as important as the technological infrastructure – if anything was missing from the Joint Statement, it was more explicit language committing the two countries toward this goal in line with initiatives now underway by ASEAN and the plurilateral agreement on e-commerce launched in 2019 by Australia, Japan, and Singapore. The mention of an “enhanced” Global Digital Connectivity Partnership may ultimately serve that purpose, but it’s currently unclear.

As for supply chain resiliency, there are two approaches to redistributing supply chains – one which diversifies sourcing and facilities to hedge against disruptions, and one which attempts either to repatriate economic activity or to move it away from an adversary economy, with the effect of weaponizing economic interdependence towards a zero-sum goal. Trump famously preferred the latter, and while even his critics had to admit that his administration identified important issues in the global trading system such as steel overcapacity, his enthusiasm for unilateral coercive measures ensured the response was almost as damaging as the original problem.

Japan already has experience with supply chain resiliency issues – in 2010 China suspended the export of vital rare earth materials to Japan following the detainment of a Chinese fishing trawler captain who rammed a Japanese patrol vessel near the Senkaku Islands. In response, the Japanese government worked to diversify its sources of rare earths. Japan also strengthened its investment screening mechanisms to prevent foreign entities or governments from acquiring technology critical for national security and provided $2.2 billion in support to encourage firms to reduce overdependence on Chinese sources in their supply chains. Coordinating export and technology controls to those ends is also essential to provide predictability among businesses along those supply chains – ongoing discussions over semiconductors, a vital component for many technologies essential for national security, will provide early insight into the future of supply chains in a post-COVID scenario.

Their meeting was productive, but the agenda is full and following through on the leaders’ stated ambitions will take as much finesse domestically as it will internationally. International cooperation will only be as good as the careful management of domestic politics will allow.