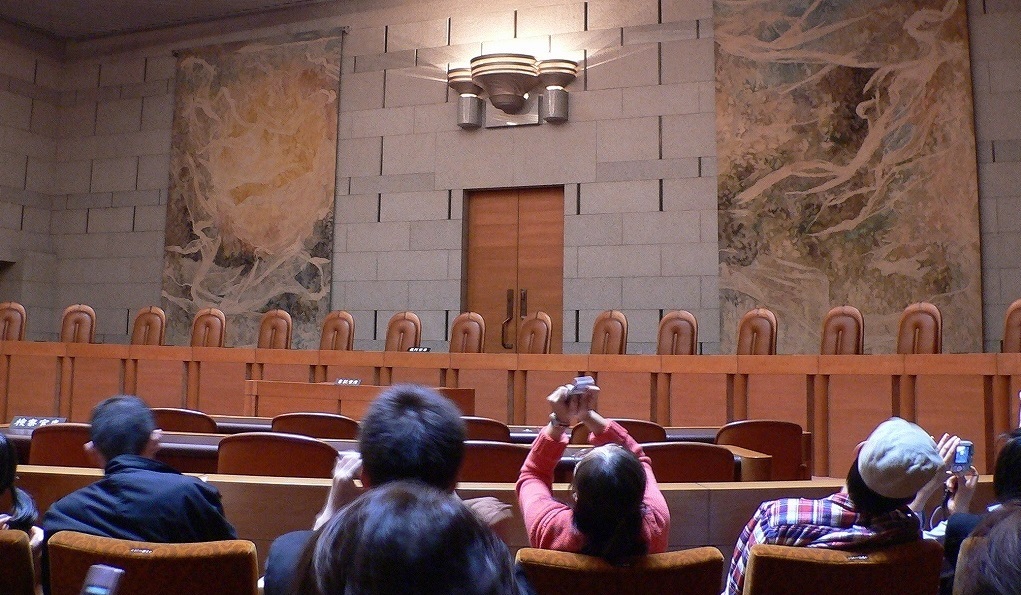 Recent years have witnessed Japan’s most dramatic program of legal and political reforms since the end of the Second World War, reforms calculated to transfer policymaking dominance from the civic bureaucracy to the political executive. This transition has produced a succession of authoritarian legislative measures, including 2013’s State Secrecy Act, the Cabinet’s unilateral reinterpretation of Article 9 of the Constitution, and most recently last month’s Anti-Conspiracy Act. Troubling though these measures are, they are at least attributable to identifiable agents answerable—in principle—to the electorate. In this way even authoritarian policies can be more democratic—at least in a formal sense—than policies incubated within an opaque and unaccountable bureaucratic apparatus. Perhaps such overt politicality in policymaking will even catalyze the political dialectic, galvanizing opposition into organized dissent.

Moreover, it is at least possible that the transition from bureaucratic to manifestly political policymaking will invite changes to other features of Japan’s postwar constitutional settlement, features that are contingent on bureaucratic dominance. One such feature is the absence of meaningful judicial review over the constitutionality of legislation. The Japanese Constitution empowers the judiciary to check “any law, order, regulation or official act” for compliance with the Constitution. However, this American-imported vision of government-under-law bears little resemblance to reality: in fewer than ten instances has the Japanese Supreme Court declared legislation or other state actions to be unconstitutional.

Predictably, some explain the failure of the Constitutional vision of government constrained by law in terms of a peculiarly Japanese aversion to formal law and adjudication, the result of a “cultural” predisposition towards harmony and consensus, to which legal challenge is inimical. Perhaps the greatest contribution of legal scholars to wider Japanese studies is in debunking such Orientalist claims: empirical data shows convincingly that Japanese people do indeed assert their legal rights, even though they do so only rarely through litigation itself.

Explanations for the lack of searching judicial review in Japan therefore cannot appeal lazily to “culture,” but must look instead to specifically legal considerations. A more promising account posits that the institutional design of the judiciary promotes rigid adherence to the ideology of the Supreme Court bench, which is itself selected on ideological grounds by the Cabinet, comprised of Liberal Democratic Party politicians for the vast majority of Japan’s postwar history. In short, judges find for the government—read, the Liberal Democratic Party—because they share its conclusions about the legitimacy of its actions.

These accounts are not necessarily incorrect, but there is more to be offered here than a purely human story. The absence of serious legal scrutiny over legislation and acts of state comprises not just an institutional practice but a rule of Japanese constitutional law. All legal systems contain a complex nexus of fundamental legal rules—either codified or uncodified—regulating public power. This is sometimes called the “material” constitution, as opposed to the “formal” Constitution, namely a specific document containing several important relevant legal rules. In no legal system is the material constitution limited to the contents of the formal Constitutional text. In Japan, the formal Constitution’s designation of the judiciary as the authoritative arbiter of constitutionality is supplanted by a contradictory rule within the wider, material constitution. This presupposes the supremacy not of the judiciary but of the civic bureaucracy. It is this rule that insulates the vast majority of legislation from meaningful judicial constitutionality review. Traditionally, Japanese lawmaking is an overwhelmingly bureaucratic, rather than political, process. Legislative initiatives typically originate within the respective departmental administrations, and ultimately proceed only after refinement and approval by the Cabinet Legislation Bureau, an elite arm of the administration composed of seconded legal experts from other departments. Despite the aspirations of the formal Constitutional text, Japan’s material constitution awards the bureaucratic apparatus its own legal authority. Its actions therefore entail their own lawfulness: as the supreme organ of the material constitution, the bureaucracy’s stance concerning the lawfulness of particular state action simply outranks the judiciary’s own.

The constitutional supremacy of the bureaucracy is the product of Japan’s modern political history. The modern Japanese state arose by violently overthrowing the previous regime of the Tokugawa Shogunate. A revolutionary regime does not necessarily achieve legal authority in the act of conquest. Logically it cannot receive authority derivatively, for instance from preexisting legal rules providing for the transition from one ruler to the next, because the act of revolution has necessarily eradicated the regime of which such rules formed a part. Rather a revolutionary regime must found its own legal authority afresh by winning social endorsement. The fledgling Imperial state did this though depoliticizing its power. Power in the Imperial regime vested in a bureaucratic apparatus that was—or, more importantly, appeared—efficient, meritocratic, and beyond the vulgarities of political life. However, legitimizing state power by reference to its independence and expertise produced a new dilemma, since neither feature logically justified the monopoly on power necessary for the credibility of a political regime: after all, the state cannot plausibly claim a monopoly on expertise. To preserve its credibility, the regime needed to control the increasingly disruptive challenges from powerful interest groups, particularly the emerging forces of commerce and industry. Its highly effective solution was to assimilate all social interests powerful enough to challenge its monopoly on the formulation of policy, coopting them into the state’s web of technocratic regulation in exchange for formal recognition and privileged representation before bureaucratic policymakers. Thus emerged the familiar picture of Japanese governance, in which favored social interests are grafted onto the administrative state, making it hard to tell where the state apparatus ends and state-sponsored private interests begin. The material result was that the civic bureaucracy—not the legislature, and not the courts—emerged as the arena in which competing social interests were definitively reconciled into policy positions and eventually into specific instances of state power.

The American legal reformers changed only the most superficial element of the Japanese constitution—the formal Constitutional text itself—and did not alter the functional dominance of the bureaucracy that entailed its material constitutional supremacy. However, it is this factual balance of power that Japan’s recent political leadership has sought to subvert. Intriguingly, in seeking to change the essentially bureaucratic character of Japanese government—in order to remove obstacles to its own power—the political executive is abandoning a situation that has insulated public power, including legislation, from legal challenge and confined the law to a peripheral role in Japanese governance. While it would be premature affirmatively to predict that the politicization of Japanese government will turn the law into a meaningful constraint on the exercise of public power, it at least invites the law to assume the role envisioned for it by the formal Constitutional text. If this comes to pass, it will represent a radical change to the balance of power in Japan that its political leadership can scarcely have anticipated.

Aurelia George Mulgan, The Abe Administration and the Rise of the Prime Ministerial Executive (2017, Routledge)