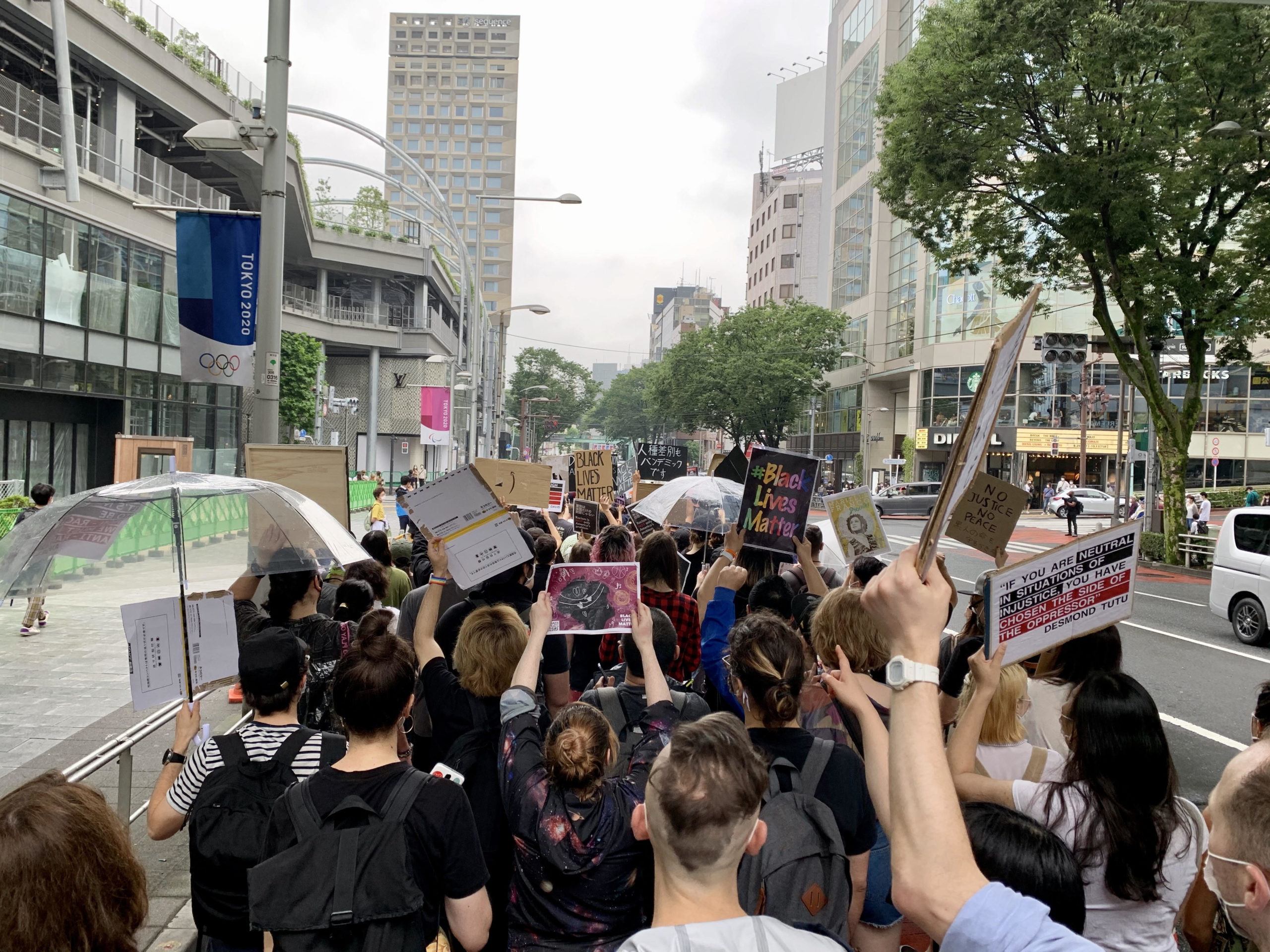 The gathering of 3,500 people on June 14 to march through central Tokyo in support of the Black Lives Matter movement was remarkable in light of the obstacles with which the organizers—principally students at Temple University—had to contend: COVID-19, inclement weather, a media presenting anti-Black racism as a foreign phenomenon irrelevant to Japan, and widespread apprehension about the dangers of involvement in high-profile political activities.

Some regard BLM as an inappropriate cause to be championed in Japan—marches have also been held in Osaka, Kyoto and Nagoya—because it concerns a “foreign” rather than a Japanese issue. In truth, however, such critics are seldom troubled because Japanese people lend support to overseas battles for justice, but because in doing so they simultaneously scrutinize racial (and other) inequalities at home. The Japanese BLM project is therefore important for the same reason it is maligned. Namely, it demonstrates the thinning of boundaries between Japanese and ‘foreign’ political consciousness. Perhaps most offensively of all, it complicates the essentialist delineation between “Japanese” and “foreign” so crucial to the identity and ideology of Japanese conservatism.

The Japanese movement is nonetheless qualitatively distinct from the tectonic release of righteous anger seen in the West. Although complemented by smaller, more contentious demonstrations linked specifically to local events, the “official” Japanese BLM efforts have remained determinedly faithful to official constraints. Inevitably, the movement will manifest differently in countries without a large Black population or local legacy of Black enslavement. Nonetheless the conscious and insistent civility of Japan’s major BLM marches need further explanation. A deeper focus exposes the forces that have so far worked to fragment and defuse mass organized political opposition in Japan, not least by sewing divisions between “foreign” and Japanese movements.

When is a protest not a protest?

An immediately striking feature of the BLM Tokyo march was the event’s deliberate characterization as a peaceful march—rather than a “demonstration” or (worse still) a “protest”—in implied contrast to the smaller, more agitated events that followed police aggression towards a Kurdish resident in May. Organizers scrutinized slogans on banners at the start point in Yoyogi Park for compliance with the conditions of police goodwill: “positive messages” only, with no denunciations of specific people or groups (such as politicians, or police…). Nonetheless, social media prominently featured warnings to participants and guidance about how to minimize the risk of police harassment, and what to do in the worst-case scenario of an arrest. Much uncertainty surrounded the legality of foreign nationals’ presence and involvement, compared to that of Japanese citizens.

In principle, Japanese citizens have a constitutionally protected right to freedom of speech and assembly, which cannot be said so reliably about foreign residents. The precise legal position is vague and rarely authoritatively articulated. In what passes for the leading case, an American appealed unsuccessfully to the Supreme Court following the non-renewal of his visa, alleging that this was tantamount to unconstitutional punishment for engagement in political activism. According to the Court’s circular and evasive judgment, foreign nationals enjoy all the rights in the Constitution except “those…which by their nature…address Japanese nationals only.” The Constitution guarantees foreigners’ rights to political action other than those “inappropriate…[for] a foreign national,” understood as actions which “influence…political decision-making and its implementation in Japan.”

Importantly, foreign and Japanese activists are equally vulnerable to criminal liability associated with political activities; the legality of specific protest behaviors has nothing to do with the nationality of the actor. Indeed, a foreign protester charged for some criminal act cannot defend herself by invoking the Constitution. But neither, in practice, can her Japanese comrade—the prospect of a court dismissing criminal charges by reference to abstract constitutional rights is vanishingly remote.

The distinctive vulnerability of foreign activists is instead to official repercussions outside the criminal law, for behavior that is legal but unfavored by the authorities—most obviously in the context of immigration procedures. Activism may especially haunt seekers after permanent residency, who must have been of ‘good conduct’ without inviting ‘social criticism’ during their time in Japan. It is hard to know how often an applicant’s politicality leads to unfavorable immigration decisions; the process is an administrative black box, and no explanation need be offered for outcomes. Nonetheless the threat of de facto punishment for lawful political behavior pollutes the atmosphere in which foreign nationals decide their degree of personal political involvement, disincentivizing full integration into political struggles in Japan.

This is obviously detrimental to foreign nationals, who—already electorally disenfranchised—are deterred from asserting their interests by other kinds of collective political organization. This becomes especially problematic at times like the present, when the openly discriminatory prohibition on foreign residents reentering Japan reveals how little the national government cares about their interests, and how powerless they are to assert them. But it is also bad for domestic Japanese movements for social transformation. Whether this is a conscious objective of the Japanese administration is unclear, but the effect of the above situation is to rob domestic movements of the support of potential allies, protecting the beneficiaries of the political and economic status quo.

The vulnerability of foreign nationals to extra-legal punishment explains the determination of the BLM marches to exude civility and even apoliticality. BLM Japan therefore represents organized popular dissent at its most liberal and accommodating. For example, when asked about next steps during the “RealTalk” webinar conducted under the auspices of BLM Tokyo, the organizers spoke principally of awareness-raising, participation in electoral politics, and ethical consumption.

This is not to disparage the methods or ambition of the movement in Japan, but to expose the bad faith of the criticism it has attracted. The vitriol that accompanied such determinedly peaceable efforts unites the Japanese anti-racist experience with similar movements abroad. Everywhere, ostensibly “procedural” critiques of campaigns for social justice—insistences that dissent is legitimate only if lawful, respectful and “civil”—are disingenuous. Demands that change be sought only through lawful and undisruptive means are loudest from those whose interests are already prioritized by present political conditions, silently confident that the “proper channels” will in fact forestall redistributionist social change. Even at this most peaceable of events, the probationary nature of official toleration was plain; as each wave of marchers reached the finish-line in Yoyogi Park, organizers loudly relayed the orders, from the large police presence, to disperse immediately. Police likewise confirmed via loudspeaker that their continued indulgence depended on participants’ instant departure from the (public) space at which the march concluded.

BLM has the potential for transformative practical impact in the United States, not least because it demands the dismantling of the state’s very capacity to oppress the disenfranchised, in the knowledge that fundamental systemic change does not result from appeals to the conscience of the powerful, but from displays of organized popular power that the authorities lack the resources or endurance to suppress. Japan’s social conditions are not those of the United States, and BLM Japan has endeavored to stay within the tolerance of the Japanese authorities. Nevertheless, it has made a valuable contribution to the potential for future radical politics in Japan. Its linking of international and local elements of the anti-racist struggle has further unified Japan’s disadvantaged demographics. Denying that racism and anti-Blackness are foreign rather than Japanese problems, the organizers have emphasized the mutually-reinforcing dual purposes of Japan’s BLM movement. The marches were, of course, acts of solidarity with Black citizens in the United States and elsewhere. But they are simultaneously a contribution to Japan’s own anti-racist struggle; the organizers pointed particularly to the experiences of Black migrants and the othering of biracial Japanese children of Black heritage.

Despite its foreign pedigree, BLM contributes to a more general momentum that can be productively cultivated by Japan’s marginalized. Many without a direct personal stake in BLM itself may therefore find their interests—such as feminism, disability rights, or LGBTQ+ liberation—allied with the movement. In this, the marches probably inherited some of the role of this year’s cancelled Rainbow Pride march, supplying an alternative high-profile nodal point for allied liberationist efforts.

Thousands-strong gatherings uniting foreign-national residents, Japanese citizens of mixed heritage or foreign upbringing, and ethnic Japanese people intimately connected with affairs overseas raise the specter of a different future stalking Japan—a future with a far more nebulous understanding of what it means to be Japanese. While such a future is attractive to the kind of person who joined the BLM marches in Japan, it is one towards which many remain ambivalent or hostile.

The Evolution of LDP Factions

On the surface the lower house election in October seemed to signal stability for Japan’s ruling Liberal Democratic Party (LDP). However, there...

Welcome to installment XXXVI (December 2021) of Sino-Japanese Review, a monthly column on major developments in relations between China and Japan that...

On the surface, Japan’s most recent general election on October 31st, did not appear to bring any major change to Japanese politics....

Welcome to installment XXXV (November 2021) of Sino-Japanese Review, a monthly column on the major developments in relations between China and Japan....

What’s Next for Japan’s Opposition?

It’s hard to imagine a worse outcome for Japan’s opposition after suffering a major blow in the general election on October 31....