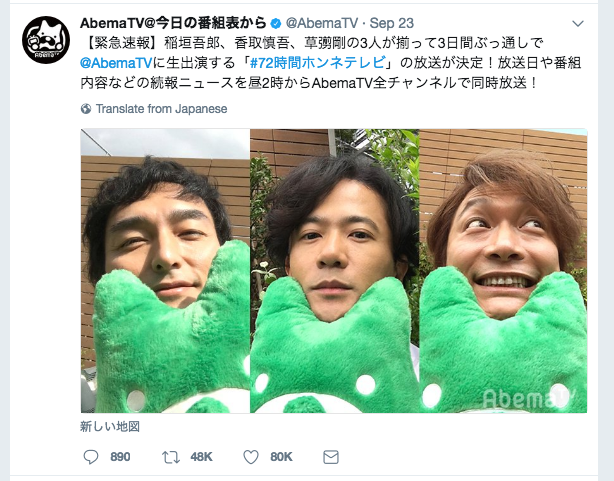 When three ex-members of Japanese superstar group SMAP last month announced their first media appearances after quitting their draconian talent agency, they chose Instagram, Youtube, blogging, and online TV network AbemaTV. Their announcement is one sign of how social media and non-traditional outlets are giving Japanese celebrities more freedom over their image amid increased concern about the power of talent agencies and support for the rights of performers.

Traditionally, jimusho, or talent agencies, have held tight control over Japanese celebrities’ media appearances. One example of how extreme this control can be: Johnny & Associates, the agency that represented SMAP, didn’t allow photos of its stars on the internet at all until recently.

In this context, television was the main media platform for celebrities. As W. David Marx notes in “The Jimusho System: Understanding the Production Logic of the Japanese Entertainment Industry,” talent agencies “retain the decision-making power about which performers appear on which TV programs. This is mainly due to their ability to leverage access to their most popular stars.” A majority of spots on the most-watched shows are filled with talent from the top agencies.

Social media gives stars an outlet that is harder for their talent agencies to control, and doesn’t require fans to be part of an expensive fan club to get access. Weekly tabloid Shukan Bunshun has alleged that popular model Rola is bound to an abusive manager by a 10-year contract. While her talent agency might influence her relationships with traditional media, Rola seems to maintain her freedom on her vibrant Instagram account, and even appeared to take a stab at her manager in a post that went viral on Twitter in June: “I was backstabbed recently and I’m really depressed, but I would never do such a thing to anyone.”

Up and coming Japanese companies and media have also benefited when celebrities are looking to do something outside of the grips of talent agencies. After young talent Nonen Rena clashed with her talent agency, essentially barring her from regular television performances, Line Mobile featured her in a commercial in March. While traditional companies and television stations couldn’t touch her, newcomer Line Mobile was able to take a risk on the star.

Then there’s AbemaTV, the online TV network that will host the three former SMAP members for a 72-hour program starting November 2. AbemaTV is a collaboration between Internet service company CyberAgent Inc. and TV Asahi launched in March, 2016. It’s currently the seventh most downloaded free app on the Japan iTunes store, and has been downloaded over 20 million times.

The three SMAP members have also created their own website, “Atarashii Chizu” or “New Map” to connect with fans and raised an estimated ¥550 million from new fan club subscribers. Fan club access has in the past been a significant way for talent agencies to extract money from fans.

To maintain relationships with talent agencies, media has previously avoided the issue of celebrities’ rights

Nevertheless, some local media have said that the SMAP members still rely on an executive from K-Dash, a major talent agency, for media appearances and may not in fact have be actually able to totally escape the traditional confines of the industry. There are also of course, many celebrities who participate in social media but are still controlled closely by their producers; the performers in the AKB groups are a case in point.

This shift has also been made possible by an increased awareness about celebrities’ rights, a topic that media have avoided until now in order to maintain access to stars through their agencies. The Entertainers’ Rights Association started operating in June.

SMAP’s embrace of new media sets an important precedent for other talent, and hopefully will spur interesting collaboration outside of traditional media, as well as possibly put pressure on talent agencies to improve the working conditions of performers.

Some, like Johnny’s WEST and Mirei Kiritani, have already branched into Netflix. They will not be the last.

This piece was updated to reflect the participation of certain talents in Netflix programming. Thank you to our readers for pointing out the omission.