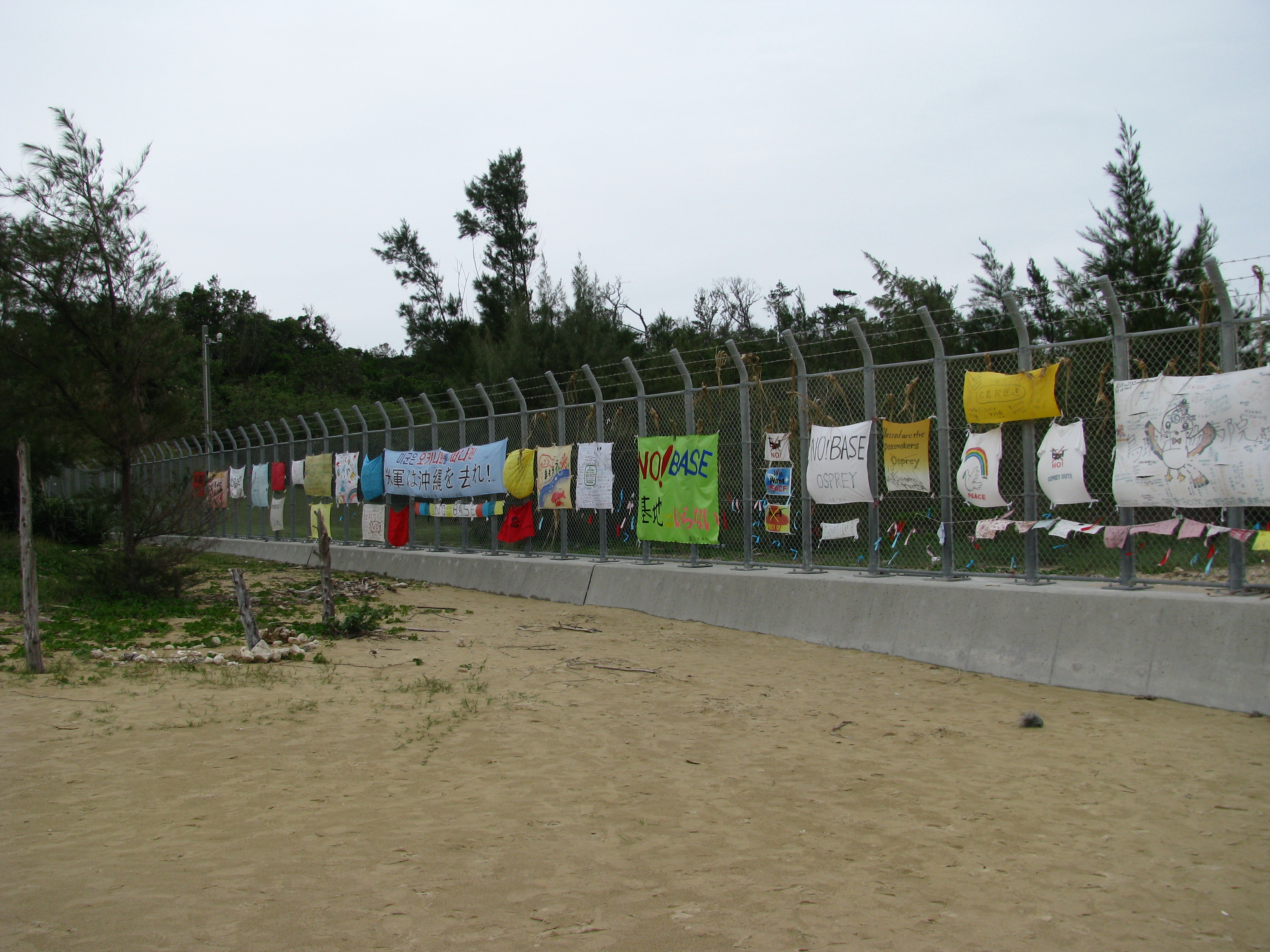 On February 24, the prefecture of Okinawa will hold a referendum on the construction of a major extension to the U.S. Marine Corps base at Henoko, on the outskirts of Nago City in the northeastern area of Okinawa’s main island. Designed to allow the relocation of the existing Futenma base, the extension has been a point of contention since the 1990s. The referendum championed by recently-elected Okinawa Governor Denny Tamaki and the “All-Okinawa” advocacy coalition is the latest example of tensions over the relocation plan.

The plan for the Henoko extension has existed since 1999, but twenty years later, Okinawans are still going to the polls to record a position on whether or not they want it (though this will be the first prefecture-wide referendum specifically on the Henoko base). This is largely because of a long history of cycling between acceptance and rejection of the Futenma relocation plan by Okinawa’s local governments.

News reports have focused on a 1996 referendum as being the first to capture Okinawan sentiments towards the Futenma relocation, but that is slightly misleading. The 1996 referendum was indeed the first prefecture-wide vote related to U.S. bases but it focused on broader issues related to stationing U.S. forces in Okinawa following the rape of a 12-year old girl by three U.S. service members. The 1996 referendum asked voters if they wanted reduction of U.S. bases in Okinawa and changes to the legal provisions underwriting U.S. forces in Japan. In that referendum, 89 percent of respondents voted in favor of change. Among the resulting changes in response to the results of the referendum was the decision to close Marine Corps Air Station Futenma, which consequentially generated the need to build relocation facilities. An extension to the existing base at Henoko became the prescribed solution.

There is a long history of cycling between acceptance and rejection of the Futenma relocation plan by Okinawa’s local governments.

The first referendum specific to the Henoko extension took place in 1997 and marked the start of the two decade cycle between local acceptance and opposition. On December 21, 1997, the city of Nago which would become the home of the facilities relocated from Futenma, held a municipal referendum that showed a majority of city-wide voters were opposed to the central government’s plan. But just three days later the Nago mayor ignored the referendum and delivered the city’s support for the FRF to the central government before resigning. The central government then offered sweeteners to secure support from the municipal assembly, including the selection of Nago to host the 2000 G8 Summit. By December 2000, the Nago assembly officially passed a resolution of acceptance of the base – which would be overturned several years later. This cycle has continued ever since.

Newly elected governor Denny Tamaki is seeking to break that cycle and announced his intent to hold a prefecture-wide referendum just days after taking office. His goal is simple enough: give all Okinawan people an up or down vote on the Futenma relocation plan once and for all. However clear cut that may seem, two sources of pushback have undermined his plan.

First, immediately following the prefectural assembly’s decision to hold a referendum, nine of Okinawa’s 41 municipal assemblies voted against funding the vote (Okinawa City, Ginowan, Uruma, Miyakojima, Ishigaki, Itoman, Yonaguni, Motobu, and Kin Town). Without funding, these cities could not actually hold the elections and residents of those municipalities would not have had the chance to cast ballots. The grounds for rejection was the binary “yes/no” vote, which assemblies argued failed to capture the complex sentiments surrounding the Henoko extension, how it reflects base-hosting responsibilities in other areas of the prefecture, and broader base reduction plans that hinge on the completion of the Futenma Replacement Facility. Gradually, the prefectural government was able to bring the number of holdouts down to five, but in order to ensure maximum participation the prefectural government conceded and added a third option to the ballot: “neither.” With this step, the remaining holdouts relented.

The goal is simple enough: give all Okinawan people an up or down vote on the Futenma relocation plan once and for all

Critics have argued that the Liberal Democratic Party has used these local holdouts to undermine the referendum – but while the LDP certainly uses its political power to its own benefit in many cases, there are more complex reasons for the resistance of some municipalities. For example, the Ginowan city leadership supports completion of the Henoko extension so that the Futenma base can shut down – a referendum against the extension could delay that process and keep Futenma open longer. Yonaguni and Miyakojima are municipalities that will soon be home to expanded JSDF bases, and a “no new bases in Okinawa” platform runs counter to their policy decisions. There are also links to subsidies, other base reduction plans, and personal interests (such as business or construction contracts). For those parties, the referendum is an attempt to offer a black-and-white answer to an issue full of gray areas. Some sought to derail the referendum outright, while others sought to gain more nuanced ballot options. The prefectural government’s addition of the “neither” option was a compromise to those parties to maximize participation and avoid arguments seeking to delegitimize the outcomes of the vote.

A second source of pushback came from above, rather than below: the referendum is considered non-binding and the central government has already dismissed the outcome. The day the referendum passed the Okinawan prefectural assembly, Minister of Defense Takeshi Iwaya remarked that the current relocation plan is still the only way forward and Chief Cabinet Secretary Yoshihde Suga echoed that sentiment during his daily press conference on February 14, saying that the referendum would not impact the central government’s plans. This has two consequences. One, it could affect turnout if voters believe that their votes will not matter and the LDP government can then use low voter turnout to dismiss the results of the referendum. Two, it advantages LDP courses of action following the referendum – if the vote shows majority support, the government can accept it as mandate to move forward with the plan unabated. If the referendum shows a majority against, the government can simultaneously argue that the referendum does not adequately reflect Okinawan opinions while repeating its pattern of offering “sweeteners” in exchange for acceptance of the plan.

One advantage working in the favor of opponents to the Henoko extension is the fact that the original construction plan requires modification. The seabed is softer than expected, forcing changes in construction designs that require approval from the prefectural government. A referendum outcome against the extension would support Governor Tamaki’s decision to reject the modifications. In such a case, the LDP would have to pull out all of the stops for incentivizing acceptance from the Okinawan government.

In the end, it may not be the vote that matters, but the leverage that can be gained

The LDP is already preparing sweeteners for that eventuality, primarily in the form of a revision or supplement to the U.S.-Japan Status of Forces Agreement. The “SOFA” is the agreement that covers all legal elements related to stationing U.S. personnel in Japan, from criminal jurisdiction, to land usage, to tax rules, and more. A common call from anti-base activists in Okinawa is for revision of the 59-year old agreement, but both governments have been hesitant to reopen the entire SOFA. Instead, they have targeted “supplemental” agreements which offer de facto revisions to specific elements of the SOFA. For example, in exchange for previous Okinawa Governor Nakaima’s signature on the original landfill permit for construction of the Henoko extension in 2014, the Abe administration promised a series of subsidy increases as well as a supplement to the SOFA signed in 2016. Foreign Minister Taro Kono has already suggested in Diet testimony that the next target for an SOFA supplement will be investigation access for incidents and accidents involving U.S. forces in Japan.

Opponents to the Henoko plan will challenge the central government’s response. In the unlikely event that the referendum shows majority support for the project, it would be a major blow to anti-base groups. However, if a majority votes against the Henoko base, it will provide a democratically-achieved answer that will underwrite every act of domestic protest against the base construction process. It will also reinforce the arguments of the anti-base advocates both in the United States and Japan who have repeatedly called for the U.S. government to step in and stop the process, such as the 210,000 people who signed a White House petition to halt construction at Henoko until the Okinawan people could formally offer their support or rejection of the Futenma Relocation Facility. The LDP-led government will indeed take steps to divide advocacy groups to challenge the outcome of the referendum, but any movement forward on the project itself will inevitably be branded as “undemocractic.”

While the referendum set to take place this coming weekend offers Okinawans across the prefecture a chance to vote on the Futenma relocation issue directly for the first time, it is unlikely to provide a definitive answer to the decades-long base relocation problem. The result, however, will shape the political landscape in Okinawa for years to come. While the LDP government is prepared for either outcome, a vote against the relocation will demand considerable negotiations and compensation. In the end, it may not be the vote that matters, but the leverage that can be gained.