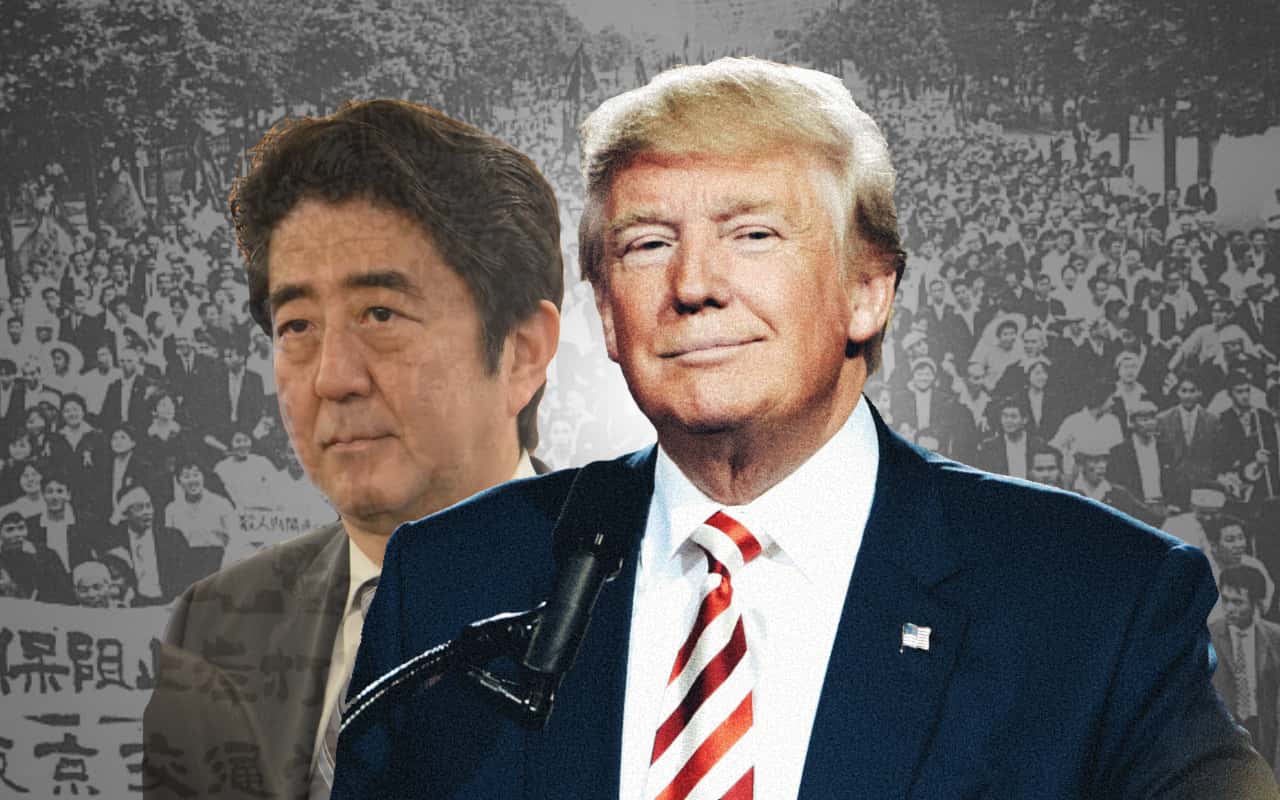 Donald Trump’s visits cause large protests in many nations – but not in Japan, where PM Abe’s relationship with the U.S. President is uncontroversial.

Prime Minister Shinzo Abe likes to tell the story of how his grandfather, Nobusuke Kishi, went golfing in the United States with President Dwight Eisenhower when he was prime minister. A detail often left out of the story is that President Eisenhower was forced to cancel his own visit to Japan as a consequence of the massive public riots incited by Kishi’s decision to ram the ratification of the U.S.-Japan security treaty through the Diet – a process that involved physically barring opposition lawmakers from the lower house chamber and concluded with Kishi’s immediate resignation and helicopter escape to avoid the angry throngs outside the Diet building.

No such threat faces Prime Minister Abe when he hosts Donald Trump in Japan – the question of Japan’s relationship with the United States and its larger role in the world have been settled for most intents and purposes. While publics in Britain and elsewhere stage large and elaborate protests against the U.S. president, Abe can bring Trump to a sumo tournament and a dinner with the emperor with hardly so much as a grumble. On the campaign trail, Abe points to his management of Trump’s presidency as a demonstration of his diplomatic acumen. Though the extent to which this is true is debatable, attitudes toward the United States are historically a strong indicator of support for the ruling LDP and the perception that Abe is successfully managing this tricky relationship is definitely strong. It is even rumored that Abe may make his relationship with Trump into a key plank of his platform in the next lower house election, whenever that may be.

Clearly the politics around Japan’s relationship with the United States has changed over the 60 years. Kishi would envy the ease with which his grandson can work with Japan’s ally. Put simply, modern Japanese leaders rarely face a practical cost for being too close to a U.S. president, nor do they gain much benefit for standing up to one. The worst they might face are some scathing editorials from certain major newspapers, but those would have happened anyway. The Japanese may not like Trump – only 30 percent of Japanese express confidence in his leadership – but not to the point that they’d fill the streets to block his arrival or make their displeasure heard.

Japanese public opinion isn’t much of an outlier among other advanced democracies, and generally trends in opinion towards the United States in other countries. While Japanese people are less skeptical than continental Europeans, their views run parallel with those in Europe over time – and their attitudes towards the United States are not nearly as enthusiastic as respondents in South Korea and the Philippines. In 2018, two-thirds of Japanese viewed the United States positively, compared to 50 percent of British, 35 percent of French, and 30 percent of Germans. In terms of Asian geopolitics, 80 percent of Japanese support a U.S.-led order as opposed to just 8 percent who supported a Chinese-led order (11 percent offered another suggestion or didn’t know).

Public support for the United States improved directly after World War II, reaching as high as 66 percent in 1950, but then sunk below 20 percent in the early 1970s as factors such as the U.S. reversal on Japan’s role in the Cold War (specifically U.S. demands on a possible military role for Japan), the security treaty, and concerns about U.S. domestic interference weighed heavily on public opinion. Much of this, however, was offset by improved attitudes towards American culture and entertainment. The chief cause for the drop in favorable attitudes was not a sharp increase in negative attitudes towards the United States, but rather of ambivalence, with the era seeing an increase in the number of neutral respondents who neither liked nor disliked the country.

While analysts writing at the time of the protests over the security treaty noted the deep polarization that captured the Japanese public – writing in 1962, noted Japan scholar Herbert Passin observed that “the quality of all-out, uncompromising struggle is the most disturbing feature of the political climate today” (an observation likely to raise eyebrows among casual observers of modern Japanese politics) – the anger and conflict was hardly widespread. Less than half of Japanese survey respondents knew the treaty terms or had any opinion about it. Even among Japanese that were interested and informed, opinion was evenly divided (20 percent in favor versus 20 percent opposed). Kishi may have underestimated the potential opposition to the treaty, but he was right to assume that much of the public was indifferent.

Those who were starkly divided over the treaty may have been a minority of the population as a whole, but they nonetheless represented a critical divide in postwar Japanese politics: between conservative restorationists who wanted Japan to return to great power status on more equal footing with the United States on one hand, and students, the labor movement, and intellectuals who were committed pacifists and deeply skeptical of U.S. involvement in Japan’s domestic politics on the other. With the country just beginning to emerge from the immediate devastation of the war, progressives wanted to guard Japan from involvement in the next war to come; conservatives responded with a determination to restore Japan to the great power status that had been lost in the war. Conservatives saw the relationship with the United States as a means to achieve what Japan’s relationships first with Britain and then with Nazi Germany could not; progressives feared entrapment in an U.S.-led war and a repeat of the mistakes that practically destroyed Japan. Each side saw the worst in each other, with conservatives suspecting progressives of fomenting communist revolution and progressives seeing resurgent fascism behind every conservative move.

The issues now at stake between Trump and Abe aren’t nearly as fundamental to Japan’s identity as those which ignited the protests against the security treaty in 1959. Auto tariffs would definitely be damaging for Japan’s economy, but while Japan’s automakers and trading houses are a certain source of national pride, they are nowhere near as essential to national identity as Japan’s role as a pacifist state and its peace constitution. As troubling as Trump’s stances have been for the future of U.S.-Japan relations, issues related to the role of Japan’s military and its pacifist status have not yet been in play beyond a few asides in Trump’s comments about Japan needing to pay more or do more for its defense. Whether or not he actually tries to push through these demands is, like almost everything in his presidency, unpredictable – though it is a safe assumption that alliance managers in both countries will do their utmost to prevent that from happening. For both countries, the alliance presents a better short- and medium- term deal than any alternative could offer, and any political or international shock that might upend it is too far over the horizon to warrant much serious consideration for now.

As for Japan’s domestic politics, the alliance has also settled into a certain status quo since the treaty’s ratification. Douglas Mendel, an expert on Japanese public opinion, wrote in 1966 that “none of the fears expressed by the critics of the 1960 treaty had materialized by 1966. Trade with Communist nations continues to expand; the defense budget of Japan remains about 10 per cent of national budget; and involvement in American military adventures has been minimal.” His line basically holds true almost 60 years later. Japan’s military remains tightly circumscribed and public opinion continues to be a formidable – and so far insurmountable – barrier to revision of the Article 9 peace clause. Japan’s grand strategy since World War II has been to hedge, acting largely independently on international economic policy but remaining tied to the U.S. security umbrella on security policy. Most instances where Japan has been accused of kowtowing to the United States on economic policy have been to prevent the United States from linking economic policy outcomes with consequences for security policy.

Issues related to the role of Japan’s military and its pacifist status have been successfully avoided by Trump and Abe – so far.

In that sense, it could be said that the protests that drove Kishi from office were successful. Even if the treaty was rammed through and remains in force today, the LDP’s leadership was spooked enough that it abandoned any further pushes towards more complete remilitarization, turning its focus instead to economic development. The concerns that underlay the original protests have never been resolved, however – one of the arguments against Abe’s legislation to allow for collective self-defense was the worry that Japan could be drawn into U.S. military adventures, while U.S. military bases, especially those in Okinawa, remain a consistent source of protest against Japan’s relationship with the United States. Even if it remains extremely unlikely that Japan will be drawn into a greater role than that currently played by the Self-Defense Forces in any future U.S. conflict, the potential is still too great for a critical threshold of the Japanese public.

In effect, the protests over the treaty were never actually about the United States but over Japan’s role as an international power. The fight took place in the aftermath of the fascists’ war that left East Asia and Japan in ruins, with the looming possibility of communist takeover and of being trapped between the Cold War superpowers. The resolution of that fight was deceptively simple – leave the United States to worry about Japan’s defense while Japan could focus on economic growth – but it never resolved the instigating question of Japan’s role in the world. Donald Trump won’t help Japan answer that question, but his recklessness and the increasing swerves in U.S. grand strategy will force Japan to find a new answer sooner than it may be ready for.