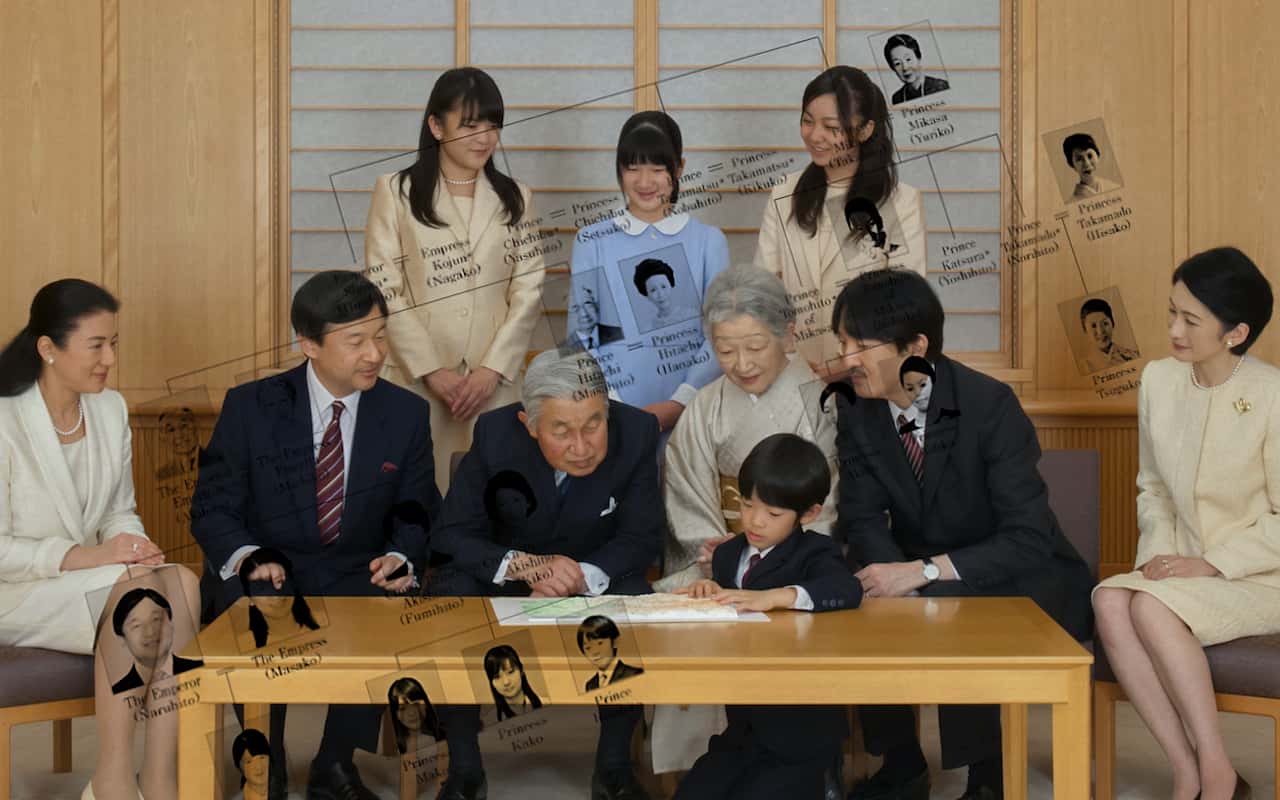 As the new Emperor is crowned, Japan’s Imperial bloodline is down to only three heirs. Can the conservative post-war rules of succession finally be changed?

On October 22nd, Japan’s Imperial coronation ceremony will take place and the formal ascension of the new emperor, Naruhito, will be complete. While most have observed the ceremonies marking the change-in-regnant with hope for what the new emperor may bring, others will have watched the transition and the reactions it has inspired with a sense of scrutiny over what the future holds for the Imperial household – not least because there are now only three candidates remaining who can succeed Naruhito. Among those most concerned will be the members of the Japanese government tasked with rewriting the postwar Imperial House Law, which is the law governing matters pertaining to Japan’s royal family. By limiting the Imperial bloodline to only male members of the royal family, this law has left the perpetuity of Japan’s line-of-succession in jeopardy.

The Japanese government has long recognized this problem but has continually pushed off any discussion of a potential solution. Most recently, during Diet questioning, Chief Cabinet Secretary Yoshihide Suga asserted that the process to solve the line of succession conundrum would begin immediately after the new Emperor acceded the throne on May 1. He later amended this to say that it will happen in November, after the formal coronation ceremony.

If the panel does finally convene, the team will have to reexamine postwar institutional constraints on the Imperial Household, many of which are rooted in conservative and patriarchal ideologies. That there are only three candidates left who may become emperor in Japan’s entire Imperial family highlights the core tension that they must resolve – the fact that in many ways the Imperial household has evolved organically with the times, while in other ways it has been artificially bounded by special interests and conservative laws aimed at upholding a manufactured concept of the household’s “integrity”. The government team now has the task of concluding a process that began over twenty years ago by updating the rules and codes around the Imperial household to fit with the contemporary reality.

While the Imperial household itself has evolved with the times, it remains artificially bounded by conservative laws and special interests.

Aside from the basic precepts found in the Constitution, the specific law dictating Imperial succession is the 1947 Imperial House Law. This law states that succession must only pass to male descendants in the male line of Imperial lineage. In other words, only men can be Emperor, and only men can pass on the Imperial bloodline. The law does have a provision in case there is a risk of the bloodline coming to its end, stating that when there are no sons, brothers, nephews, or uncles left for succession, the throne may be passed to the member of the Imperial family next nearest in lineage. This highlights a second problem – because another consequence of the 1947 law is that the Imperial family is shrinking. The law dictates that any female member of the Imperial family who marries a commoner must give up all titles and privileges. So, not only does this restrictive law prevent females from ascending to the throne and prevent the bloodline from continuing through them, it also shrinks the size of the Imperial family every time a female member of the household marries someone who is not of royal birth. The catch here, of course, is that the Japanese aristocracy was abolished in 1946 – almost all marriage options for members of the Imperial household are to commoners simply by default.

Where does that leave the current state of the line of succession? The 1947 legal framework has whittled the line after Emperor Naruhito down to three: Naruhito’s brother, Fumihito (53); his nephew, Prince Hisahito (12); and his uncle, the Prince Hitachi Masahito (83). If Prince Hisahito does not produce a male heir, Japan’s Imperial bloodline will need to pass to the next closest in lineage. The problem there is that the entire Imperial family is now down to eighteen members, thirteen of whom are women and therefore cannot accede the throne.

Also hanging in the balance is the fate of Naruhito’s daughter, Princess Aiko, and his oldest niece, Princess Mako – Prince Hisahito’s oldest sister. If the law changes, Aiko stands to become the first Empress of Japan in over a thousand years. Mako, however, has announced her intention to marry Kei Komura, a commoner, which would force her renounce her royal title and its privileges. Her family has repeatedly stated that the marriage is being delayed until her fiancé’s financial situation improves, but this would not be such a concern if the law were to change to allow them to remain in the Imperial family after the marriage. Given the ongoing discussions around the law, it is possible that the family is holding out so that Mako could potentially retain her royal status even after marriage.

The entire Imperial family is now down to eighteen members – of whom thirteen are women and currently cannot accede the throne.

The team discussing this issue from November will not be the first such group convened by the government, with the first the first government body tasked with examining the succession problem dating back to 1997. At that time, Crown Prince Naruhito and his wife did not yet have any children, and both of the Prince Akishino’s children were daughters. The government held secret meetings for nearly eight years, moving slowly in part due to hopes that the Crown Prince may have a child. They did in 2001, when Princess Aiko was born; with the birth of a daughter, the government saw fit to publicly open a debate on whether Princess Aiko should be allowed to accede the throne. On January 25, 2005, the Junichirō Koizumi government formally launched a panel to examine the way ahead for amending the Imperial House Law.

Prime Minister Koizumi expressed his intent to submit legislation in accordance with those recommendations in the following year’s Diet Session, but it never happened. Why? In short, the government underwent a transition of power from Junichirō Koizumi to Shinzō Abe in early-to-mid 2006, and Prince Hisahito was born in September that same year. With new government leadership and a male heir in the Imperial line, there was no longer sufficient impetus for amending the Imperial House Law to warrant challenging conservative special interests inside and outside the LDP. The issue remained unresolved – but with the accession of Naruhito to the throne, the government is once again forced to consider the future of the Imperial household.

It may seem rooted in tradition, but there was no strict rule on male line succession until 1947.

There are three key themes that this whole situation reveals. The first is the question of which ideas connected to the Imperial Household actually have historical precedent, versus those which were simply manufactured in relatively modern times. The decidedly patriarchal nature of the 1947 law may seem rooted in tradition, but it actually does not fit well with Japan’s historical precedent. Japan had eight female sovereigns who ruled between the sixth and eighteenth centuries, and the foundational legend of the origin of the Imperial bloodline maintains that the Imperial family was descended from the goddess Amaterasu. While the traditions of the Imperial household dictated that the heir should be a male, there were no institutionalized prohibitions until 1947. Advocates of maintaining a patriarchal bloodline are erroneously attaching justification based on manufactured concepts born in the modern era.

The second theme is that the Imperial family is evolving faster than laws. In the case of line-of-succession, the issue of evolution centers on marriage practices. In the past, it was completely acceptable for the emperor to have concubines; in fact, one of the key reasons for doing so was to help produce male heirs. At that time, the Imperial bloodline was able to pass to male heirs regardless of the individual’s mother. This became an issue after the start of the Meiji era in 1868 when the Japanese government began instituting western style, monogamist marriage practices. Though this did not preclude an emperor from having mistresses by law, it eradicated the common practice of it. The Meiji emperor was the last Japanese sovereign to have a publicly-known concubine, who actually birthed his son the Taisho emperor. None of the emperors since 1912 have engaged in the practice of keeping concubines, reflecting how the Imperial family evolved with the society around it. However, the 1947 law failed to reflect that, instituting constraints on line-of-succession that were not congruent with the times.

Some former members of the royal family back the current rules, hoping that a crisis in succession would see their royal status restored.

Finally, the Japanese government’s reluctance to address this issue once and for all reflects the schism between special interest groups and the general public. When the 2005 government panel was publicly examining the possibility of amending the Imperial House Law, a Yomiuri poll showed that 79 percent of respondents favored the idea of an “Empress Regnant,” with less than 4 percent opposed. An updated Yomiuri poll taken in November last year still showed overwhelming support, with 63 percent in favor of amending the law to allow a female to accede the throne and only 9 percent opposed. This staunch public support should have made passage of the law easy, but there are conservative factions in the Diet and special interest groups that are hardline on the necessity of a patriarchal system. Similar to the debate over the era name, there remains an intragovernmental struggle to balance between the demands of the situation and the desires of conservative interests. Among the special interest groups are those backed by former members of the Imperial household who lost their royal positions since 1947. Some of these former royals believe that the end of the current line of succession would create a crisis that would force the government to restore the status of members of the extended family who no longer have Imperial ties.

The government panel convening next month will face a tough balancing act as it seeks to settle an issue that floated around in the Japanese government for the better part of the Heisei era. With adequate public support and the impetus generated from a shrinking Imperial family, a change to the law may finally be possible. If so, when the new emperor is finally crowned, observers of the Imperial household may not simply be bearing witness to a different emperor and a different era, but the beginning of a different Imperial bloodline for once and for all.