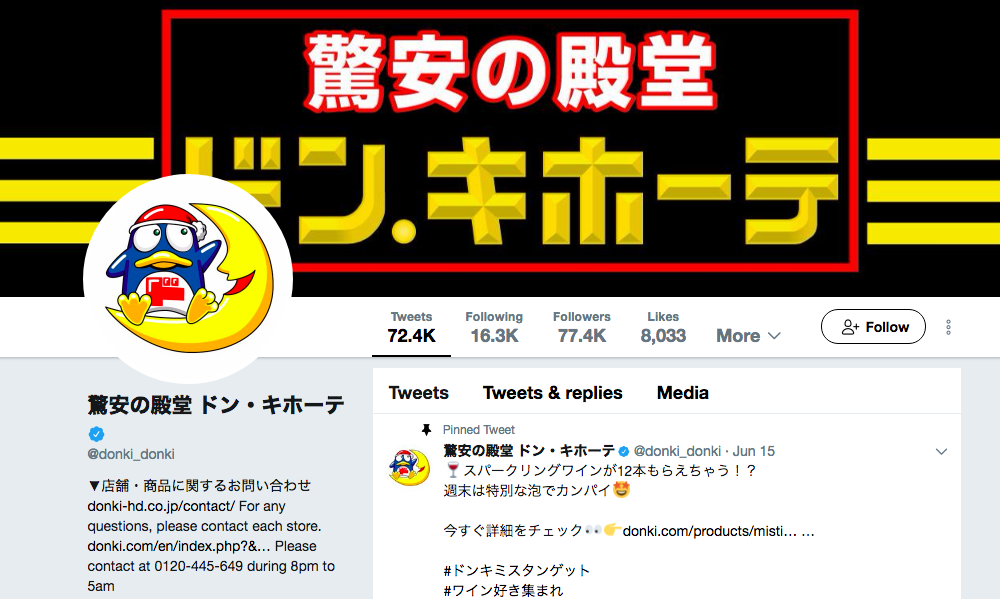 When embattled electronics maker Sharp Corporation opened university recruiting for 2018 earlier this year, its official Twitter account called the company’s recruiting materials “superficial” and full of “flowery words” and confessing “Speaking as someone who actually works at the company, I can tell you this one thing for certain: it is much better here than it was a few years ago.”

Not exactly the kind of message that a company that spent years in near-bankruptcy only to be bought by a Taiwanese electronics giant might want to send to potential recruits.

Yet Sharp’s Twitter account is one of Japan’s most popular brand accounts – a significant accomplishment in a country where more people use Twitter than Facebook. It is a good example of the colorful corporate Twitter accounts that are winning fame and followers because the opinions and personality of the writer don’t necessarily match with the image of the company, in contrast to the Twitter strategies of European and U.S. brands.

The most recent brand account to blow up in Japan is a good example of this disconnect between the person (or cartoon animal) tweeting from a corporate account and the brand itself. On July 17, discount goods store Don Quijote started a Twitter question-and-answer campaign. Users can ask the store’s penguin mascot questions using the hashtag #donkisan (#ドンキさん). The cartoon bird’s responses are razor-sharp – a far cry from the store’s party-and-buy-cheap-things atmosphere. (I mean, the company plays this song on repeat in the stores.) For example:

Q: Donki-san, the person I’m dating blocked me on Line and Twitter. What should I do?

Government offices in Japan are lined with files made by office supplies company King Jim Co. Yet its popular official account tweets zany things often completely unrelated to files or folders – sprinkled with ASCII art. Imagine if the Staples or Office Depot account was run with the personality of a Reddit user who loves random memes.

This disconnect between writer and company at times leads the tweet writer to break ranks with the official line and drift towards irreverence, as in the case of Sharp while popular brand accounts in the United States and Europe keep tweets on message. Even if they use humor or sarcasm, they aren’t necessarily being sarcastic about themselves.

Another characteristic of these popular corporate accounts unique to Japan is the idea that there is a “person inside” (中の人), similar to someone inside a mascot character costume. In the United States, accounts often refer to themselves with the pronoun “we,” pointing to a team of people behind the account. In that case, the user experience is that of interacting with a brand, rather than an individual.

But Japanese Twitter followers love when they can get a glimpse into the life of the individual behind a corporate account separate from the company. Sharp’s long-time account handler, employee Takahiro Yamamoto, tweets photos of a pet bird. He also banters with the account for scale-maker Tanita Corp. and their online relationship has spawned a comic book.

Companies such as Sharp and Tanita are taking risks in giving Twitter account handlers such independence. Another official Sharp account (for products) was suspended by the company earlier this year after the “person inside” criticized pricing of a Nintendo Co. product. But there is no denying that humorous accounts humanize the company for customers.

With Japanese users having such a large presence on Twitter, perhaps other Japanese companies might benefit by taking a risk and putting someone “inside” their Twitter.

Addendum: For anyone who is wondering, the most followed Japanese corporate account on Twitter is Seven Eleven Japan, with over 2.5 million followers as of July 30. More interesting than the tame official account, however, is a rogue account run by the manager of a branch in Western Tokyo. Yes, headquarters probably doesn’t like the tweets, but I really want to go there.