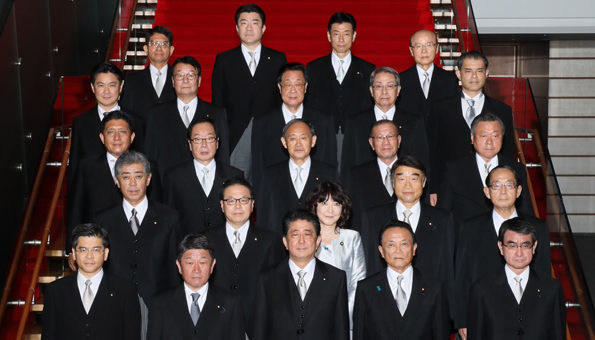 Part I of this series examined the changes made in the four LDP Leadership and 19 cabinet postings. This article offers broader analysis of the cabinet reshuffle, incorporating all state minister and vice-ministerial appointments.

When Prime Minister Shinzo Abe announced his senior postings on Tuesday, he called it his Zenin Yakyu Naikaku (“All-hands Baseball Team Cabinet”), and the sub-cabinet billets designated today reflect his push for a party unity following the LDP presidential election. There were 52 postings announced (25 state minister and 27 parliamentary vice-minister postings), and distribution across all factions and independents were generally in line with the proportions of the party each represents (e.g. the Hosoda faction commands 23 percent of members and received 22.2 percent of cabinet postings). This was a pragmatic play for Abe, with notable observations detailed below:

This is Abe’s home faction, and although there were even splits among factions in appointments at the ministerial-level, the Hosoda Faction gained ground in the junior cabinet postings. Hosoda currently commands 23 percent of party Diet members and received 22 percent of the postings. Abe may not have stacked the deck with his factional friends at the senior level, but he postured junior Hosoda Faction members for future leadership roles.

Aso’s early and steadfast support of Abe continued to reap benefits for Taro Aso and company. In this latest reshuffle, the Aso faction enjoyed a far higher proportion of appointments than other factions in state- and vice-ministerial postings. Meanwhile, the fact that Aso faction members are now the Minister of Foreign Affairs (Taro Kono) and Minister of Defense (Takeshi Iwaya), three of six principals that meet in National Security Council meetings belong to the Aso faction. This reshuffle also keeps Aso’s front-runner for post-Abe leadership, Taro Kono, in the spotlight.

Wataru Takeshita took over leadership of this group in April with the intent to make it operate more like a traditional LDP faction in solidarity and direction. He was unsuccessful to this end, as half of the faction split to support Abe and the other half Ishiba in last month’s party presidential election. Abe exploited this fissure in the reshuffle, appointing only lower house Takeshita faction members to his cabinet (State Minister for Foreign Affairs Masahisa Sato being the only exception). In doing so, he is forcing the seam to widen. The Takeshita faction may be the third largest in the LDP, but this cabinet reshuffle leaves Takeshita with a long road ahead to regain control of his splintered group.

Fumio Kishida has seen his post-Abe leadership prospects slipping away as Abe has consolidated power and other faction heads have made moves to increase membership. With regard to his future prime-ministerial prospects, Kishida had a critical decision to make for the LDP presidential election. Kishida could have allied with Ishiba and given Abe a much tougher battle for a third term. However, Kishida guaranteed an Abe victory in the LDP presidential election when he chose to side with the prime minister. This decision was a risk-averse one, opting to count on promises from Abe. With differing ideology and politics however, Kishida is still not Abe’s first choice. This reshuffle reinforced that fact, with Kishida failing to gain a better position for himself than Policy Research Council Chair and losing appointments to the Aso faction.

There has not been a more vocal cheerleader of Abe among LDP faction heads, and the pragmatic choice has paid off. While he lost a share of appointments to the Aso faction, Nikai took a near even split with Kishida. More importantly, Nikai was able to maintain control of the LDP secretary-general post, the party’s de facto number two position. That will be critical for him to continue posturing himself and his faction members for the post-Abe LDP.

As the challenger to Abe in the LDP election, Abe could have denied Ishiba and his supporters any cabinet postings. Still, Ishiba commanded a noteworthy amount of support from the local LDP chapters, and shutting out Ishiba supporters could have led to a greater divide between central and regional party members. To restore harmony, Abe conceded a share of cabinet and sub-cabinet postings proportional to the size of Ishiba’s faction in the party, including offering leadership of the Ministry of Justice to Takashi Yamashita. Shigeru Ishiba himself kept his distance in case Abe falters and an opportunity reemerges for him to ascend to party leadership, but the concessions suggest that a tenuous truce has been established between the two LDP heavyweights.

If there is any faction fading into obscurity, it is the Nobuteru Ishihara’s. It’s hard to believe now that Ishihara was a threat to Shinzo Abe in the 2012 party presidential race, considering he only has 14 faction members. Ishihara was the fourth faction head to announce his support for Abe, but it proved too little too late to gain extra consideration in cabinet appointments. Ishihara has 3.4 percent of LDP Diet members and got just one billet out of 72 (just over one percent of postings). Even more discouraging for the faction was that Ishihara petitioned for one of its members to earn a senior billet, but was forced to settle for a sub-cabinet appointment. Ishihara will need to make some bold moves to regain any hope of influencing post-Abe LDP leadership designs, including revisiting the idea of a merger with another faction.

A Cabinet where Women Shine?

Immediately after announcing his cabinet, the small number of female appointments drew ire from opposition party and media alike. When questioned why Satsuki Katayama was the only woman appointed to the cabinet, Abe’s response was timid: “I acknowledge that the ratio of women in the cabinet is low. I hope that Ms. Katayama, who has enough presence for two or even three people, will raise the banner high for women’s advancement.” Such an answer was unlikely to satisfy public opinion.

To rectify the gender composition problem, the Abe administration made up ground with the number of women named to state and vice-ministerial postings. Women comprise only 9.8 percent of LDP diet members and received 12 percent of the sub-cabinet appointments. While these postings do not have the stature or significance as the 19 cabinet appointments made on October 2, they are important for building portfolios of future female party leaders.

The issue of filling cabinet appointments with women is less an indictment of the Abe administration than one of the LDP, which has such a low number of female members. That number is made lower when the LDP endorses candidates who later disqualify themselves for prominent postings, like Mio Sugita who made derogatory remarks about the LGBT community, or Mayuko Toyota who had to resign for persistent verbal abuse of her staff. The problem of low female representation in cabinet postings will only continue until the party changes its recruitment designs to introduce greater female representation.

As part of his “baseball team” cabinet, Abe gave due consideration for independents in cabinet appointments, though the ever-popular Shinjiro Koizumi did not appear in the lineup after disclosing his support for Shigeru Ishiba in the party presidential election. Instead, he will take on another party committee chair position – this time the LDP’s Health, Labor, and Welfare Committee. While not as high profile as a cabinet posting, it allows him to maintain his independence from the Abe cabinet, focus on an area of policy interest (social security reform), and build relationships within the party. All of this conforms to his middlegame strategy and validates his political play in last month’s LDP election.

As the cabinet that is meant to carry the administration through two key elections and several other major political events in the coming year, public approval of the reshuffle will be important to monitor. So far, it is not looking good. The Yomiuri Shimbun was the first to publish public opinion data, and it showed only 38 percent positively assess the changes, while 45 percent do not. Meanwhile, the Nikkei Shimbun recorded a five point drop in cabinet approval rating following the reshuffle. Other polls have shown either no change or negative change. On the whole, data suggests that the key factors influencing negative opinions are the retention of Finance Minister Aso and the clear influence of old guard factional politics, though aberrant behavior and missteps by new ministers will only serve to drive approval down further. In the past, where cabinet reshuffles can offer a boost of up to ten points in public approval, failure to gain any ground in public opinion offers Abe’s administration minimal political capital for weathering scandals or pushing through controversial legislation.

With this cabinet reshuffle, Abe tried to foster party unity while shoring up control of the LDP. He focused more on repaying debts than rewarding friends and shied away from ostracizing those who opposed him in the September LDP presidential election. There is a challenging political calendar ahead of the Abe administration, and this cabinet reshuffle is meant to distribute responsibility and share the burden until Abe has an opportunity to pursue his personal policy agenda. The unity play was also critical in order for Abe to gain the elusive party consensus on his proposal for amendment of Article IX of the constitution.

There are still questions that remain before labeling this reshuffle successful. This is the cabinet that is meant to carry the LDP through the April unified elections and House of Councillors election. Will the public opinion bounce back from the initial tepid response? Will the reshuffle help the LDP gain ground in seats? Will Abe be able to marginalize his intraparty critics?

If the answer to any of those questions is no, in the best-case scenario, Abe’s ability to pursue his policy agenda (including Constitutional revision) will be significantly hampered. However, if all the answers to those questions is yes, he will likely once again find himself in a position to pursue key policy objectives through 2019 and beyond.