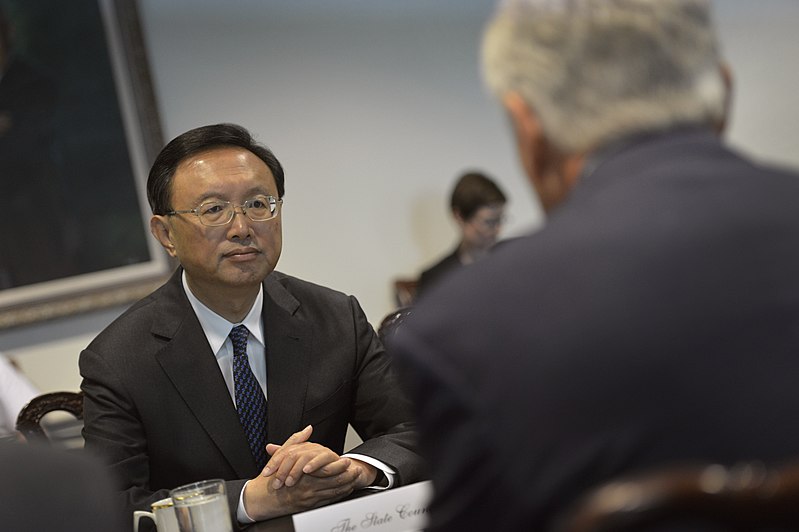 As disputes between the U.S. and China overshadow Asian geopolitics, top officials in China and Japan seek to emphasize the stability of their relationship.

Welcome to the June 2019 installment of “Sino-Japanese Review”, a monthly column that provides a running commentary on the evolution of the important relationship between China and Japan, and helps to put current events in perspective. Previous installments may be found here.

The increasingly gloomy prospects for Sino-U.S. relations have been central to seemingly every conversation about Asian affairs recently. The issue undoubtedly came up during talks between Prime Minister Shinzo Abe and President Donald Trump held at the end of May in Tokyo. It was certainly mentioned during the subsequent joint press conference, when Abe — seemingly unprompted — expressed his hope for a quick return to stable economic relations between the world’s largest and second-largest economic powers. This call for stability was revealing: regardless of Japan’s own (numerous) disagreements with China, a trade war, with all the disruption it implies, is certainly not the solution Tokyo would have chosen. Quite the opposite in fact, as another diplomatic event that took place in Tokyo (this time with very little fanfare) earlier in May demonstrated.

Politburo member Yang Jiechi, China’s highest-ranking diplomat, was welcomed on May 16th and 17th by his counterpart, National Security Advisor Shotaro Yachi, for informal and relaxed discussions in the hot-spring resort of Karuizawa. This was in preparation for Xi Jinping’s state visit, tentatively set to take place early next year. Yang also met Foreign Minister Taro Kono and Abe himself in Tokyo. These were courtesy visits, where views were exchanged and arrangements confirmed with regard to Xi’s attendance at the Osaka G20 summit this month as well as for other high level meetings further down the diplomatic schedule. Nothing of substance was agreed upon. That was not the point, of course. Abe simply reaffirmed approvingly that Sino-Japanese relations had “returned to a normal track” while Yang expressed confidence in their continuing “healthy and stable development”. This talk of “stability” and especially of “normality” has become a regular feature of high level meetings between the two states, with numerous previous occurrences over the past three years when it was presented first as a goal, then as an achievement.

If the two sides deem it important to insist on maintaining “normal” bilateral relations, it is precisely because unresolved disputes over historical memory and territorial and security issues are such acute threats to this normality. The breakdown in official communications during the confrontation surrounding the Senkaku/Diaoyu islands in 2010-2014 was a sobering experience in this regard. As a consequence, the two sides have agreed to maintain a steady pace of high-level visits to regularly demonstrate their common will to keep diplomatic channels open, to prevent issues in conflict from engulfing the whole relationship, and eventually to solve said issues through dialogue. The goal here is stability proactively enforced from the top down, with the heads of state and other high officials dedicating themselves to avoiding open conflict and to maintaining normal ties even in times of stress. Defense communication mechanisms put in place last year should hopefully help in that endeavor. This is only a tenuous settlement, to be sure, but it is precious enough for Japan not to let it be disrupted by the regular dispatches to the Senkaku/Diaoyu of China Coast Guard vessels, whose aim is to periodically reaffirm the PRC’s claim to the disputed islands controlled by Tokyo. Meanwhile, China seems ready to reward Japan’s non-confrontational approach with the same kind of concessions on the economic front – better protection of intellectual propriety rights, improved market access, etc. – that the United States is currently demanding.

The relative diplomatic comity between Beijing and Tokyo also serves to boost their international status. Having Japan attend the second Belt and Road Forum in April, for example, earned political capital for Xi’s signature project. On the Japanese side, demonstrating an ability to maintain stable relations with Asia’s rising power despite deep disagreements and the increasingly confrontational stance taken by Washington is likely to earn praise from concerned neighbors.

Only time will tell if this common Sino-Japanese strategy of conflict avoidance and active stability maintenance can withstand the next crisis. The keen attention now paid to the Senkaku/Diaoyu by the central governments on both sides — and the increased coast guard presence in the surrounding waters — mean that the kind of provocative moves that have triggered past confrontations (in 1996, 2004, 2010 and 2012) are now harder for individual political actors to make. The most acute point of friction between the two countries has thus been partly neutralized. There are plenty of others, though. Most worrying are the very choppy geopolitical waters that the Sino-U.S. trade war and growing strategic rivalry seem to presage. These could prove highly destabilizing for Sino-Japanese relations. Xi, Abe, and their subordinates will need to show flexibility and determination to preserve the hard-earned, if artificial, normality between the two neighbors.